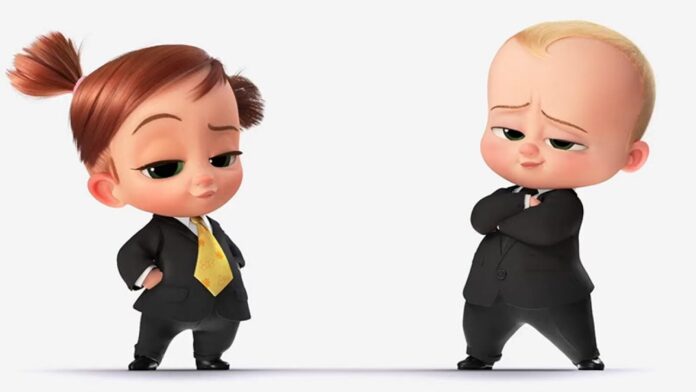 Talking babies seem to hold a fixation for cinema audiences. ‘Look’s Whos Talking’ made a fortune and spawned two further films and 2017’s Boss Baby earned a huge $527m with its tale of a belligerent bad tempered suited up baby boss of a corporation proving so popular that America voted one as President.  We now have a slightly belated sequel with Boss Baby 2 where Tim Templeton, the seven year old from the first film, is now an unemployed couch potato……sorry we mean house husband though thankfully not following what our Editor thinks are suitable qualities for such a role namely sitting around the house all day wearing pants with perished elastic watching Holly Willoughby on daytime TV  presenting an item on This Morning about lingerie. Tim is now a dad himself to baby Tina and her older sister Tabitha and both are indulged by their Uncle Ted, Tim’s wealthy hedge fund manager brother who sheds dollar bills like an X Factor winner sheds hope of a second hit single.

With Tim & Ted now adults, the writers have come up with the ‘travel back in time’ plot device where the brothers revert to being baby’s again having been given a formula by baby Tina herself who is revealed to be part of Baby Corp herself. Seeing the brothers regress through a variety of horrible haircuts and fashion faux pas is one of the films most entertaining set pieces. Tina sets them their mission – to infiltrate Tabitha’s school- one for  budding geniuses. It is a school headed up  by Dr Armstrong (Jeff Goldblum), an affable Uncle figure that belies an ulterior motive as he lurks in his Bond type villain lair guarded by ninja baby’s. Inevitably this is a message movie  about family and the common theme of so many US movies so much so that even Fast & Furious films has it as a central theme when they’re not performing gravity defying stunts. But the most affecting moments is Tim teaching Tabitha about overcoming her fear of singing to an audience – something we wish Justin Bieber had never conquered – but in her case it’s at the school play.

With  an eclectic mix of songs on the soundtrack that takes in Run DMC and Enya, Boss Baby 2 is fast and frantic family fun with a convoluted plot that will go over the heads of a younger audience but will be more of an appeal to tweenies.