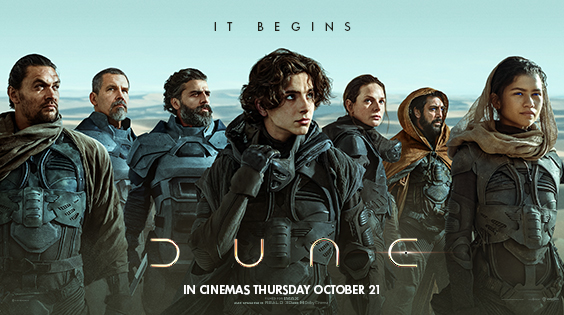 It’s well known that David Lynch’s 1984 version of Dune was catastrophically compromised (as outlined HERE) and bombed at the box office so it is a brave director to take on an adaptation of Frank Herbert’s massive sci-fi novel and even an braver studio to stump up $165m to do a remake and even more of a gamble when this is only the first half (or actually more like the first two thirds) of the novel. But if anyone could take it on it was director Dennis Villeneuve whose previous sci-fi excursions include Arrival and Blade Runner 2049.

Set in a galaxy far far away (and after a viewing it is clear how much of an influence the novel was  on George Lucas) the year is 10191 where thankfully the scourge of instagram influencers has been finally been eradicated. Timothee Chalamet (looking like Edward Scissorhands better looking brother) is Paul Atreides son to Leto (Oscar Isaac) a Duke who has been handed the responsibility by the Emperor  of presiding over the desert planet of Arrakis where the production of the spice melange had been controlled by the Harkonnen regime in brutal fashion.  But the Harkonnen led by Baron Vladimir (Stellan Skarsgard) isn’t prepared to let his control go willingly and the political machinations and preparations to regain power soon slide into action. Arrakis is a planet not without its own problems too with its indigenous inhabitants, the Freman, resentful that their planet is being mined and exploited for its natural resources and its parallel with modern day oil fields is obvious and still relevant today despite the book having been published in the mid sixties. But the planet also has its own inherent dangers in the form of the sandworms, monumental beasts powering through the dunes causing undulating massive ripples in the sand in much the same was as Gemma Collins recreating the title sequence of ‘Baywatch’. Attracted to the slightest of sounds the sandworms feature in one of the film’s most exciting scenes as a rescue attempt is made for the workers on a huge spice harvesting vehicle trapped in the desert. 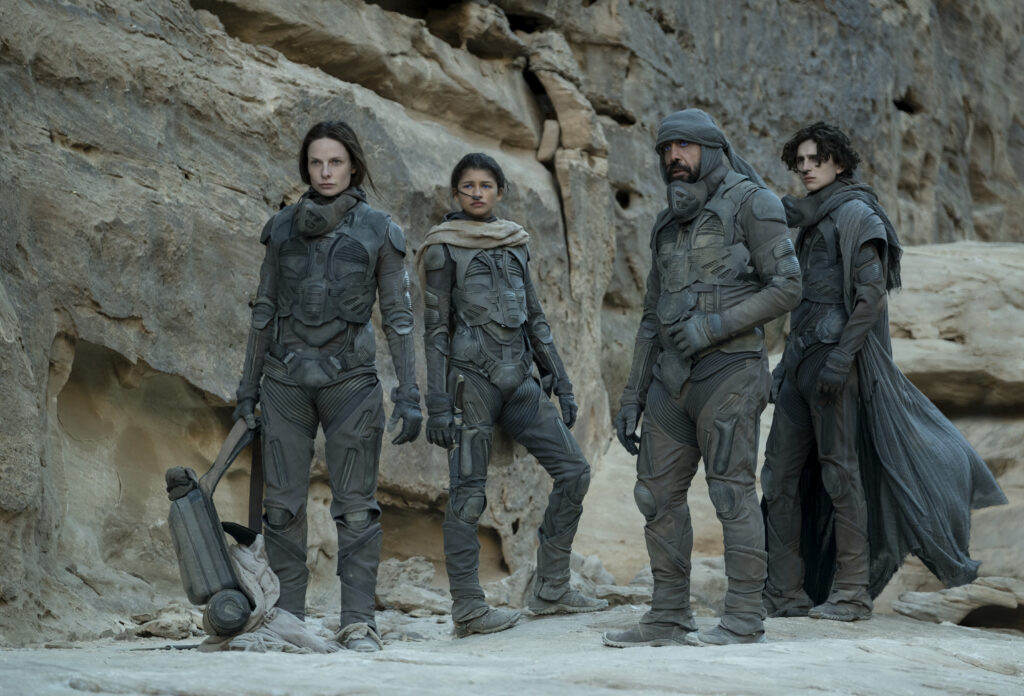 As a book Dune is a sprawling saga but Villeneuve and his co-writers have retained many of the best scenes and themes. Paul, is still coming to terms with his powers (think Jedi mind games and you’re on the right lines) as nurtured by his mother Lady Jessica (Rebecca Ferguson) and it’s his destiny as declared by his Aunt who foretells it by getting him to blindly put his hand in a box of unknown pain like some particularly gruesome round on ‘I’m a Celebrity Get Me Out of Here! ‘

It’s star name cast is impressive Chalamet charms with his growing realization of his possible saviour status, Jason Momoa lends his action man chops to as the warrior soldier dedicated to the House of Atreides and Stellan Skarsgard is unrecognisable as the Villainous Baron Harkonnen a heaving mass of lard, one moment floating like a helium filled Jabba the Hut and the next emerging from a pool of gloop like Gemma Collins in a mud bath. It’s one character that we’re keen to see more of in Dune Part 2

But the real star of Dune is the photography and design and this is a film made for the biggest of screens. Beautifully realised and heavily influenced by Arabic culture, Villeneuve pays homage to a  number of other landmark films that takes in other epics most notably Lawrence of Arabia as well as Apocalypse Now. Running at an equally epic length of 2 hours 35 minutes Dune is engrossing for most of its running time and no, it’s not the confusing as some may suggest,  but it does loses its drive in the last thirty minutes not quite ending on the intended cliffhanger despite the last line being, ‘This is only the beginning!’