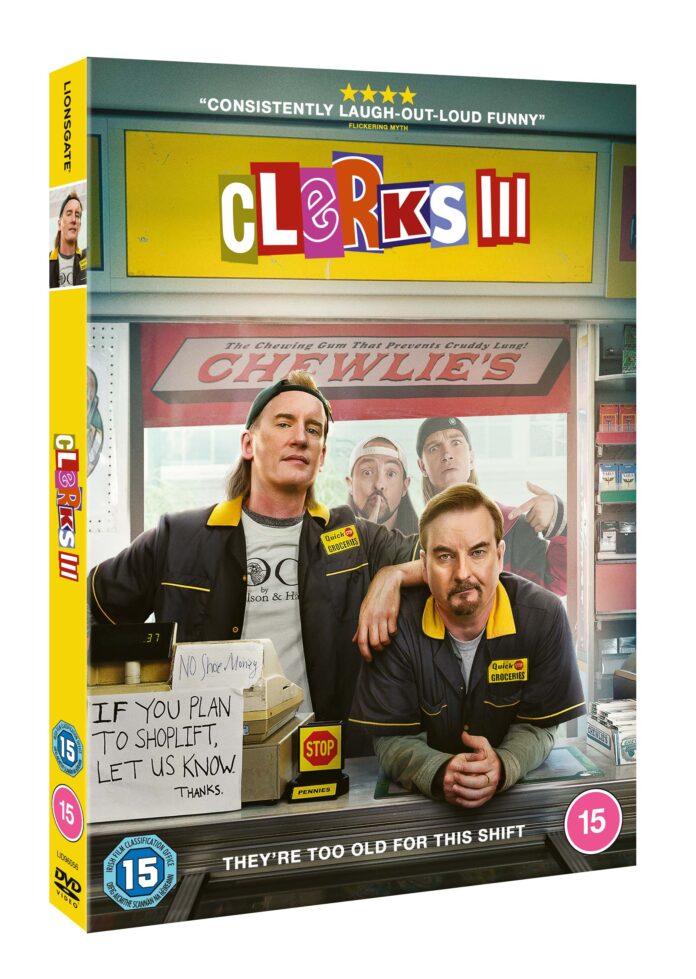 The early 1990’s had seen films like Richard Linklater’s ‘Slacker’ and Tarantino’s ‘Reservoir Dogs’ make a huge impact. Both had made their mark but both shared a similarity in that a script could be just small talk about nothing in particular but as the playwright Alan Bennet has said, ‘there’s nothing more interesting than other people’s conversations’. The success of both films and seeing that a script, especially those of early Tarantino, could riff on everyday minutiae, pop culture, literally anything and Kevin Smith had a view on everything and put his script together. Famously funding it by maxxing out his credit cards and using the convenience store where he was working as his location he made his directing debut hoping his black and white film  might drum up some interest. It did. Huge interest with Miramax taking up distribution rights and the film earning $3.1m from a budget of just $27,000

With dialogue that veered between the scatalogical, the obscene, the profane and just plain old goofing around between the characters it found an audience enamoured with the two clerks – Dante (Brian O’Halloran) , who has a yearning for some more than the dead end job he found himself in beyond the convenience store. The other was Randal (Jeff Anderson) a potty mouthed troublemaker revelling in the upset he could cause both in the next door video store he worked in as well as Dante’s. Whilst hanging about outside was Jay and Silent Bob (Jason Mewes & Smith himself) a pair of dope dealing ne’er do wells causing further trouble and a despairing Dante wailing his constant lament, ‘ I’m not even supposed to be here today!’

Though the film gave the actors a kind of career the film really launched Smith as a filmmaker that to date sees him with 27 films with his director credit. Yet few had as much charm and pull of ‘Clerks’ (1994) and a sequel, this time in colour, followed in 2006 to huge expectant fan base that earned the film a huge $27m. Smith had already helmed spin off films for his Jay and Silent Bob characters as well as a few horror films and Smith even cropped up as an actor most notably in Die Hard 4. He’d also been courted to write a Superman script which he quickly left after the producer came up with a load of daft ideas. He’d been keen on writing a reboot of the Chevy Chase ‘Fletch’ films and Smith’s ‘Audiences with….’ were and remain immensely popular with the director being forthright about Hollywood and the people he’s met and pulls no punches. With his uniform of a back to front baseball cap, long shorts, a huge ice hockey shirt and long coat that served to hide his massive weight gain he became an easily identifiable figure. February 2018 saw it come to a permanent end when a huge heart attack left him moments from death. Now fully recovered the brush with death profoundly affected him, turning vegan  and exercising regularly he turned the experience to his advantage using it as the basis for Clerks III, the third and final part of what had been an unintended trilogy.

Getting the film made wasn’t without issue. Miramax had collapsed due to the Harvey Weinstein scandal, Jeff Anderson was reluctant to commit due to a disagreement with Smith about several matters that included salary and Jason Mewes battled with a debilitating drug problem. But with much of the personal issues sorted and a financier found the film went into production and was released in September 2022.  Clerks III returns them to the convenience store where it all began when Randall suddenly has a heart attack and whilst recovering decides to make a movie about the store. It all becomes self-reverential and fans of the original film especially will love it. Read our review HERE

Like the disc release of the previous two films the Clerks III blu-ray is chock full of extra’s wholly in keeping with the entertainingly verbose Smith who starts the whole package with a piece to camera imploring everyone to buy discs rather than storing stuff in the cloud where it will get lost, deleted or hacked….and in fairness we’re inclined to agree. The disc includes two length documentaries – one slightly indulgent doco about the making of Clerks III and the other about the three films that have spanned the decades. Smith, much like Tarantino, can write and write and write so the deleted scenes comprises of a huge 30 scenes that ended up on the floor, some understandably so but all seemingly to pick up the pace of the film and shorten its running time to its current one hour and forty minutes. But Smith’s strength has always been his word play and so his yak track with the rest of the cast is immensely entertaining, almost more so that the film and is the highlight of all the disc’s bonus features. Whilst the film itself is perhaps not what fans might have wanted, and certainly audiences didn’t flock to the cinemas with Clerks III earning just $4.7m off its $7m budget the disc is one that the die-hard fans of Smith’s oeuvre will want to own.