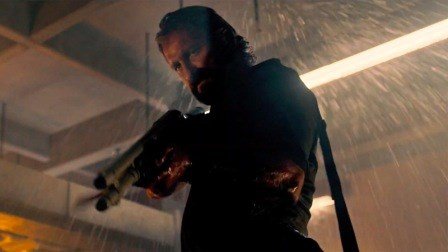 From what we hear the only place you can buy cops is dodgy South American countries and places like Thailand where it appears the local constabulary’s secretive source of income is on a par with that of a British MP’s expense claim. However the Cop Shop in writer – director Joe Carnahan’s film is a police station in Nevada where con artist Teddy Murreto (Frank Grillo) is desperate to find somewhere secure to hide out away from bullet range of hitman Bob Viddick (Gerard Butler). So Murreto’s plan to protect himself is to get himself arrested and locked up in a small town police cell. Unfortunately it’s also Viddick’s plan too when he hears that that is where Viddick is now holed up. So with the pair banged up in adjacent cells Viddick bides his time before he can carry out the hit. But like any Joe Carnahan there’s always a fly in the ointment there’s another hitman who is also out to collect the bounty on Murretto’s head (Why he doesn’t keep the chocolate bar in his pocket like anyone else is never known – terrible joke we know but hey, it’s Friday!).  Let the mayhem commence….

Made during the pandemic lockdown this is shot almost entirely in the confines of a small town police station’s offices and cells and continues Joe Carnahan’s obsession with hitmen that been going on since the teams of competing assassin’s in 2006’s ‘Smokin’ Aces’ . Cop Shop is no different and whilst both Gerard Butler and Frank Grillo continue their run of bullet blasting actioners they’re usurped by a scene stealing Tony Huss as competing hitman Anthony Lamb who is as bonkers mad as an edition of Question Time hosted by Gemma Collins. Added to this is rookie Valerie Young (Alexis Louder) a dedicated cop working on a team that takes in every type of stereotype – so we have the junk food gorging cop, the corrupt cop, the lazy cop, the destined to be gun fodder cop and so on. Louder cuts a striking image, lean and shaven headed and able to handle a gun. And she needs to as the Carnahan rachets up the action with the bodies soon piling up as the hitmen do their best to take out their mark for reasons made out in a flashback which unexpectedly does not include the fact that Grillo sports a top notch man bun beloved by hipsters with their fear of barbers.

Cop Shop is familiar territory for Carnahan whose body of work is very much this kind of actioner and never really having the break out hit that should have come his way – even his one blockbuster, 2010’s ‘The A Team’  underperformed. His scripts for Uncharted and Bad Boys 3, which he was attached to before he departed, are likely to have been big budget versions of his far lower budgeted scripts. Boss Level, his other film out this year is a similar bullet ballet and both have seen his return to the big screen after a seven year absence with TV series filling the interim and he still has that flair for carnage laden, blood spattered shoot outs but Cop Shop, with its 70’s vibe, is unlikely to be the break out hit he’s still looking for. Butler as ever continues his journey and travels through the genre having left rom-coms behind him and is far more at home with this genre where he has made some immensely entertaining films that include the London has Fallen franchise, Den of Thieves, Greenland and the under rated ‘Hunter Killer’.

Cop Shop is one of those immensely enjoyable but disposable Saturday night movies that is best complimented by a pizza and beer as the week draws to a close.