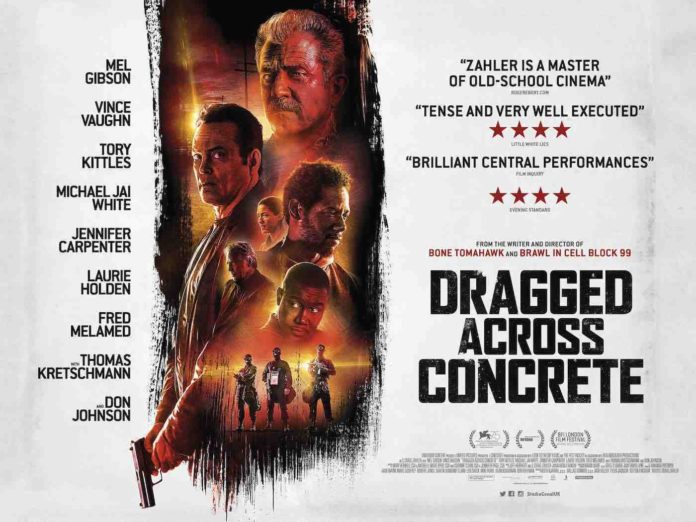 Dragged across concrete is often how the Editor is removed from The Nags Head pub on a Friday night and it’s a brutal title that is suitably appropriate for the two cops in the film of the same name.

Brett Ridgeman (Mel Gibson) is a cynical world weary long serving cop who still fights the good fight on the mean streets he patrols. He’s partnered with Anthony Lurasetti (Vince Vaughn) a younger equally committed yet not quite as jaded cop and it’s a stakeout that ends with them brutalizing a criminal and his obstinate girlfriend to get the information they need. Now for some it’s just how they want villains to be dealt with but for others it’s an outrage none more so than for the person who secretly films them dealing with the criminal on a fire exit that lands both cops with suspension as the allegation is its investigated. For Ridgeman it’s the last straw as his boss Chief Lietenant Calvert (Don Johnson) was his former cop partner who was just as brutal in dealing with criminals on his patch but has amended his ways in the name of promotion. 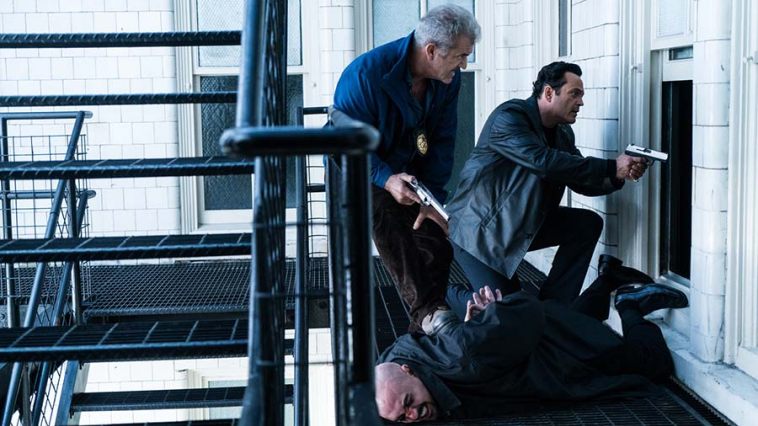 Ridgeman is an old school cop with old school ways that gets results and whilst the world of policing has changed he hasn’t and now he’s paying for it but instead he decides that he will be paid for it. With a housebound wife suffering from MS, a daughter bullied by local youths in the run down area that he can’t afford to move out of and retirement not being that far away he decides to get compensation from the criminals that he blames for getting him into this predicament.

Gibson has done his fair share of cop roles notably in the Lethal Weapon franchise but this is a world away from the glinting eyed action fest of those films and that’s because helming this is writer director S Craig Zahler whose last film ‘Brawl in Cell Block 99’ was one of the best films of 2017. Dragged across concrete therefore comes with a lot of expectation and has all the usual trademarks notably the deliberate and measured pace which this unfolds in this case its 2 hrs and 39 minutes of dialogue some of it very funny and in many ways he’s a rightful heir to Tarantino’s throne. Zahler’s other trademark is moments of violence…but this is not popcorn action movie violence but utterly brutal, hard to watch, upsetting violence and audiences familiar with this will watch with an expectation that it might explode at anytime but unlike the almost relentless carnage of Cell Block 99 this keeps it under wraps until its third act where it is horrific to the point of having to avert your eyes. 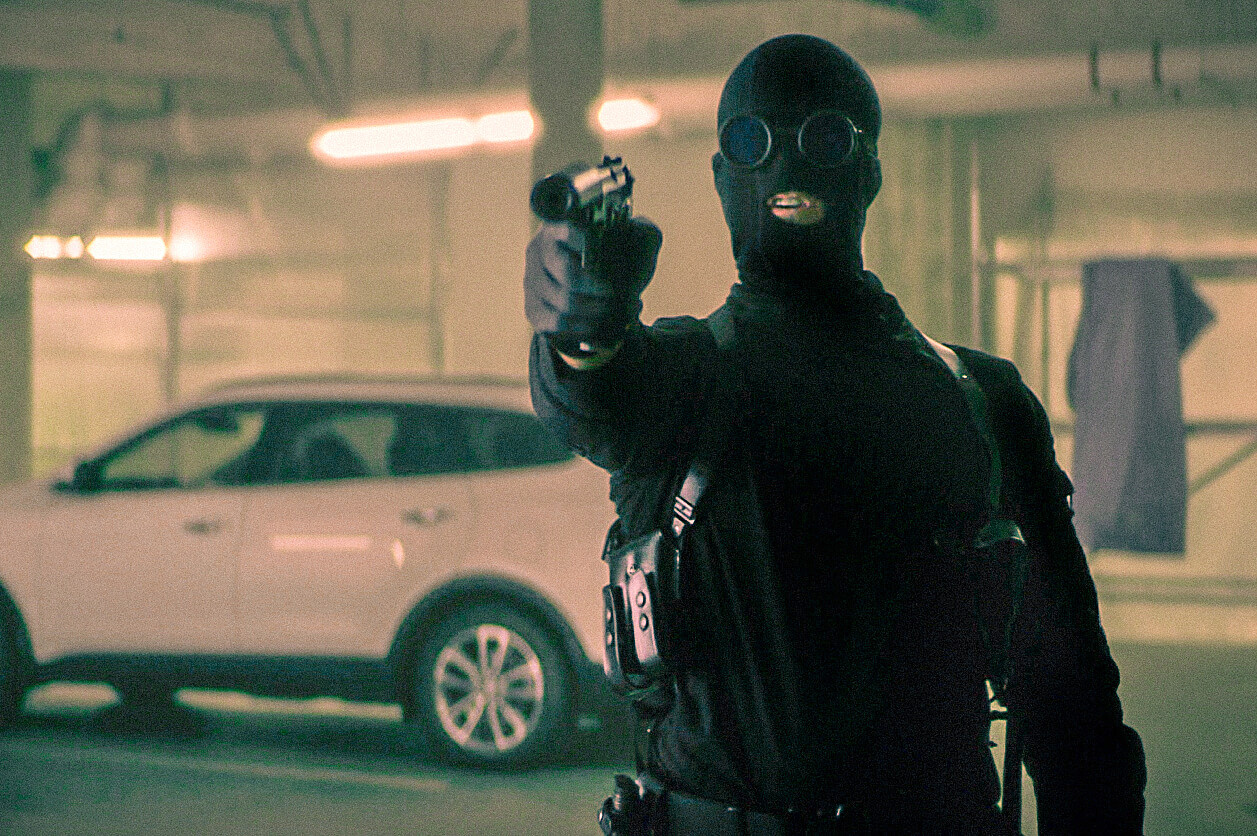 But you shouldn’t let that put you off because this is an early contender to be on Best of Year lists as Gibson & Vaughn’s cops go after a gang of ruthless and psychotic robbers who you would dearly love to see dragged across concrete at the very least. Gibson is excellent and restrained in a role that sees him as tired of police codes of conduct as he must surely be of Hollywood having been out in the wilderness for some years. Vaughn too is better in these type of dramatic roles than he is in the endless number of forgotten in the blink of an eye comedies he has done and this years Fighting with my Family was better than many he’s done in years. Zahler over the course of his handful of films is gathering a troupe of actors and Gibson is the latest along with Vaughn, Don Johnson and Udo Kier.

Though his films for some may be a little slow Zahler quickly becoming a writer / director whose next film is keenly anticipated and Dragged Across Concrete with its nods towards Michael Mann’s ‘Heat’ is refreshingly un-PC. As an audience we watch them covertly watching the gang with the cops being in the same place as the audience wondering just how this is going to unfold. How it unfolds is a wholly rewarding if brutal experience.