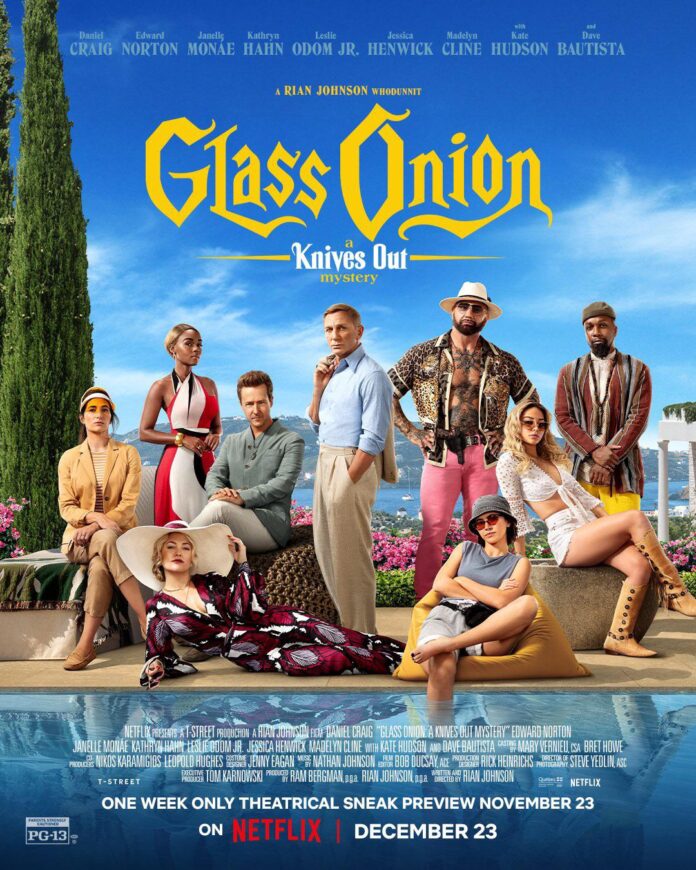 The all star murder mystery has been something of a recent resurgence after the success of 2017’s remake of Murder on the Orient Express and this year has already seen a British all star and cleverly scripted murder mystery with See How They Run. But it’s writer-director Rian Johnson’s Oscar nominated Knives Out that really caught the eye with Daniel Craig as the outrageously accented southern detective Benoit Blanc and he returns to the role in the follow up, Glass Onion. Again with a starry cast this time the film has a bigger budget that sets itself on a Greek island and the palatial home of tech billionaire and innovator Miles Bron (Edward Norton) a self styled ‘disruptor’ who invites his fellow disruptees along to his home for a weekend game of murder mystery.

It’s an eclectic group of friend’s ones who he considers as similar to himself in challenging the status quo, people who don’t play by the rules, people who break boundaries and conventions – it’s all quite clearly a dig at Elon Musk. Equally Johnson is taking a swipe at modern culture because here we have model / influencer Birdie (Kate Hudson) someone regards herself as someone who says it like she sees it  – we all know the type of irritant who thinks they’re outspoken when the reality is they speak without thinking and the role is well played by Kate Hudson who P.A. Peg (Jessica Henwick) is constantly engaged in damage limitation whenever Birdie blurts out her latest inane thing that comes into her  empty head and this must surely be a role inspired by Richard Madeley’s own PA. then there’s Duke ( Dave Bautista) a muscle bound gun toting internet star broadcasting his thoughts on guns and girls and sports a girlfriend called Whiskey (Madelyn Cline) a name presumably inspired by every politician’s mistress – 16 years old and likely to be eventually found in a barrel. Joining them is Claire Debella (Kathryn Hahn) whose electoral campaign is bankrolled by Miles and there’s also Lionel, Miles tech expert whose constantly on the receiving end of Miles often ludicrous ideas that he expects to be acted on. Rounding off the guest list is Cassandra (Janelle Monae) the other half of his company who he screwed over in order to make himself untold billions and except for her they are all in debt to Miles for something and all may hold a grievance against him.

But what Mile doesn’t expect is the arrival of Blanc camping it up with his Southern drawl and often daft outfits and even Blanc himself is not sure why he’s been invited as the rest all know one another and he is the outsider but he soon comes into his own when one of them ends up dead. To say anymore beyond this would be to spoil what is a brilliantly entertaining whodunit although much like the first film how the mystery is solved is somewhat contrived and owes much to coincidence rather than deductive thinking.

Glass Onion had a brief one week only theatrical release it would have benefitted from a longer run on a big screen. Netflix have forked out a huge sum for this and another sequel that can’t arrive soon enough if this is anything to go by with its layered plot and several delightful surprise cameos. With Christmas terrestrial TV continuing a seasonal tradition of being bloody awful Glass Onion is a bauble of brilliance.