Perhaps the only thing that vies with the brutality of the fashion houses boardroom is the Christmas sales and yet assassination by an over zealous customer in a bid to get a discounted pair of socks is yet to make the headlines. Ridley Scott’s film House of Gucci shows that the stakes were a lot higher in the mind of Patrizia Reggiani (Lady Gaga) secretary at her father’s truck company until she bumps into Maurizio Gucci (Adam Driver) a tall gawky and somewhat naive law student with no interest in the family business counteracting Patrizia’s interest which appears almost entirely fiscal and it’s something that Maurizio’s father Rodolfo (Jeremy Irons) sees straight away regarding her as little  more than an opportunist gold digger. But love is blind and Maurizio marries Patrizia and once she has her feet under the table she has her eyes on the prize of the family wealth, power and status. 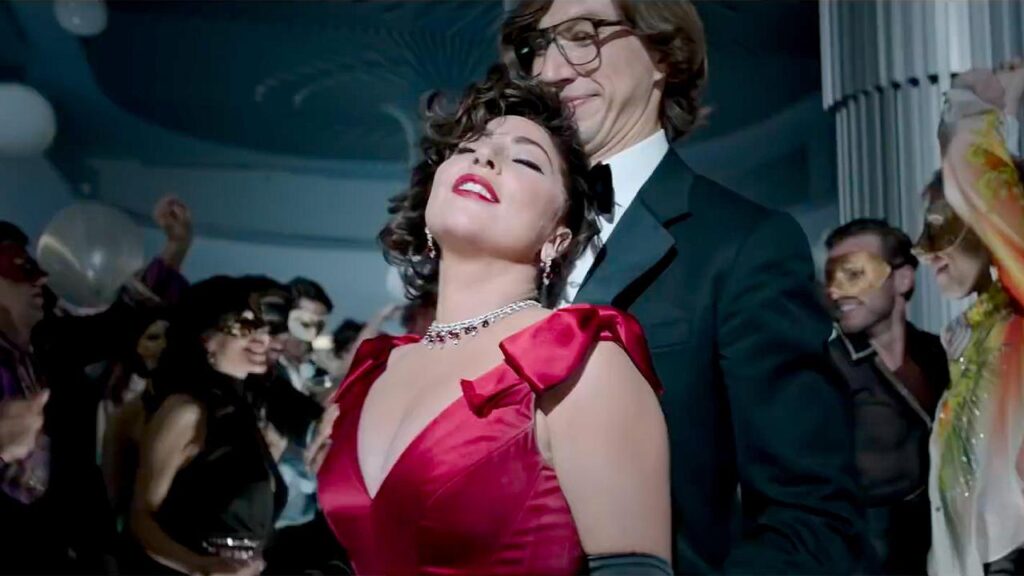 The business of House of Gucci was and is high fashion and had made a fortune with Aldo Gucci (Al Pacino) and Rodolfo having taken over from their father but there were already business tensions within the family and this plays out with the all the chicanery of The Godfather. Aldo wants to open up the business to Asia, his son Paulo (Jared Leto) regards himself as having a flair for design and Patrizia, now a Gucci, believes she has a say in how the business is run and it is part of her play for power that little will get in her way driven by her adherence to a TV tarot card reader (Salma Hayek) who becomes her personal guide – although she fails spectacularly to foresee how this will all tragically play out.

Based on a true story he’s assembled a great cast led by an excellent Lady Gaga (with another potentially Oscar worthy performance after ‘A Star is Born‘) and an always good Adam Driver. There’s something of the high camp with all the cast doing their accents but the machinations of the plot are engrossing. Pacino brings his hoo-ha game to the larger than life Aldo, Jeremy Irons is a skeletal spectre of a man quietly maintaining control over the family business with which Maurizio will inherit half and Leto unrecognisable under layers of prosthetics is comic as the designer with delusions of grandeur and who has the funniest scene with Rodolfo telling him never to let anyone see his designs.

Perhaps a little over long House of Gucci is one of Ridley Scott’s best films in a long while with a compelling and ultimately shocking story featuring an all star cast that sparkle.