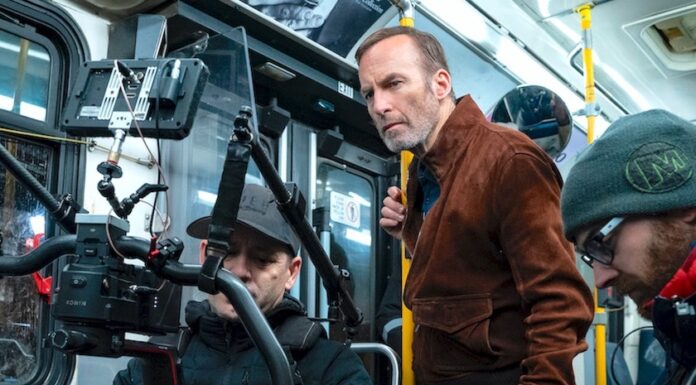 The amount of training that Bob Odenkirk put into Nobody was unprecedented. “As I understand it, it’s normal for an actor to train for four to six weeks for an action film,” producer Marc Provissiero says. “That’s standard and is normally enough for the actor to execute the action sequences, mainly because their stunt double will be doing a large percentage of the actual stunts. Do you know how long Bob trained for this role? Two years. And when I say Bob trained for two years, I mean, he trained before there was a film to train for. When he started training, we didn’t have a greenlight. We didn’t even have a yellow light. We had a first draft of a script for a different studio that decided not to make the film.”

So, why would Bob Odenkirk begin training for Nobody long before the film was even greenlit? “If you know Hollywood, you know that the chances of a unique film like Nobody getting made are small,” Odenkirk says. “But I knew that if it did get a greenlight, that I needed to be ready, and that I had a long way to go. Keep in mind that, from the start, I knew I wanted to do my own stunts, and do them up-to-par with good, if not the best, action actors of our time. No ‘cutting around’ my mistakes. I wanted to pull it off. I have always loved Jackie Chan’s films, and you absolutely know that he is doing those moves; they aren’t a body double and a lot of fast-paced editing covering for him. That is what I intended from the start.” 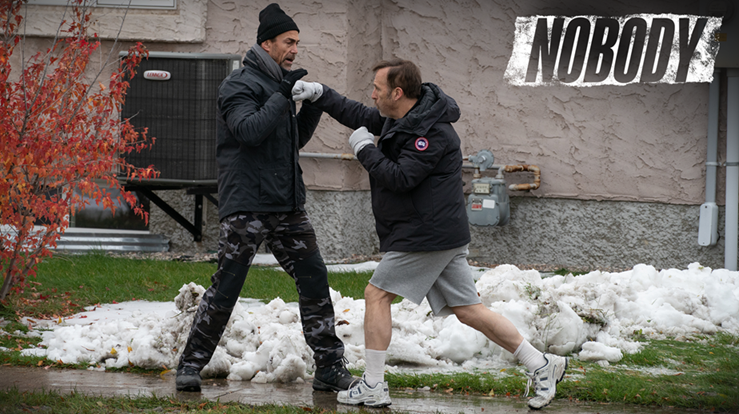 Luckily for Bob Odenkirk, he was working with the stunt industry’s leading company, co-founded and headed by 87North producer David Leitch. Leitch and his team have created action for myriad projects, including the John Wick series, Atomic Blonde and Jurassic World. Odenkirk was paired with fight coordinator Daniel Bernhardt, who trained him extensively over the course of two years. “Bob would drive 45 minutes to train with Daniel twice a day and they trained like nothing I’ve ever seen,” Provissiero says. Even when Bob started shooting Better Call Saul, Daniel would fly to Albuquerque and do training sessions with him on the weekends.

87North, the production company founded by producers David Leitch and Kelly McCormick, strives to create films featuring action sequences that are unique and fresh. “Our approach to action at 87North has always been to train the actors to do as much as possible,” Leitch says. “We take someone who’s essentially an everyman or everywoman and transform them into someone who you could believe could pull this off. When we presented this to Bob, he took on the challenge wholeheartedly and dove into the training. He spent two years being consistent in learning stunt fighting, transforming himself physically and becoming a better athlete. If he hadn’t done those two years with Daniel Bernhardt, this movie wouldn’t have been in the right place to shoot.”

When it came time to start shooting, the filmmakers hired stunt coordinator GREG REMENTER, who had most recently worked alongside Leitch and McCormick as the stunt coordinator on Fast & Furious Presents: Hobbs & Shaw. “Greg was the right person for Nobody because the action needed a grounded-ness and a grittiness, which Greg is very good at,” Like every other film he does, Leitch wanted to make the stunts as big as they could Naishuller had a unique vision for the character that he explained to Rementer. “I told Greg, ‘We’ve got to make it feel like Hutch is the wolverine,’” Naishuller says.

Rementer took note of how preparded Bob Odenkirk was upon arriving to set. “Normally the most challenging aspect of a film is figuring out how we are going to get our lead actor to do the fights and look like an action star,” Rementer says. “For this film, that was the easiest part, because by the time I arrived, Bob was so far ahead of the game. He was already there, physically. So, it was just a matter of pushing him even further, and then we just let Bob run. What makes actions movies special nowadays is the challenge of doing something new. To me, that’s letting your actors do as much action as they feel comfortable with and we feel comfortable letting them do. What audiences see onscreen is really Bob.”

The bus sequence is a pivotal part of the film. It’s not only the film’s first action scene, but it’s also the first time we see Hutch transform into his previous persona and demonstrate a skill set that we never knew he had. “Although Hutch is a little rusty, it’s visceral, severe and a little bit shocking to see him transform this way,” Leitch says. “In this moment, Hutch has a rush of adrenaline and confidence and we see him apply that confidence in a new way throughout the rest of the film.” 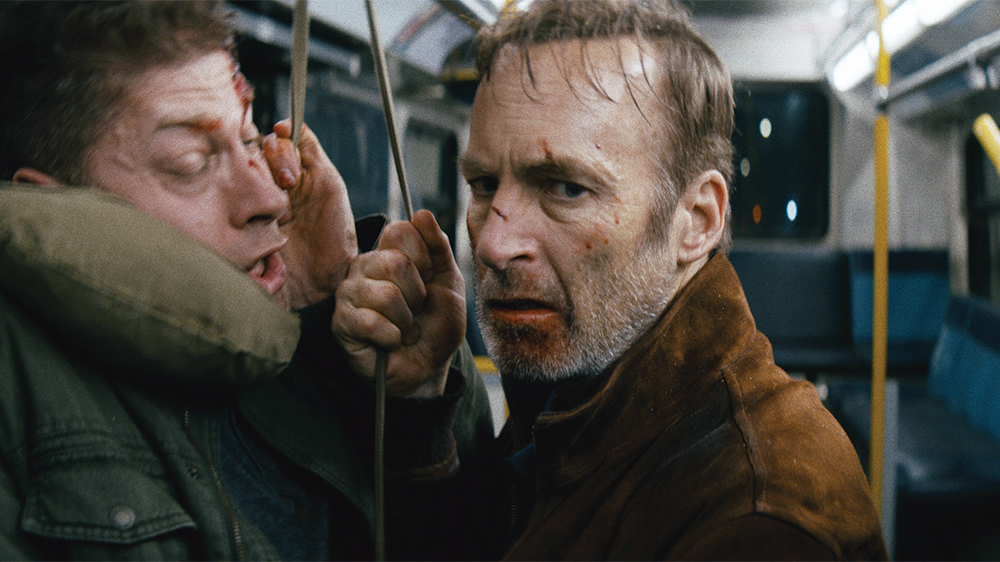 After he read the script, stunt co-ordinator Greg Rementer took a couple of bus rides and took notes about things that he saw on the bus. “I looked at what people were carrying and parts of the bus that could be used for the scene,” Rementer says. “Then, I looked at some other bus fights from past films. For the most part I like to try to stay original, but I’m not against borrowing ideas if I can make them better. When it comes to fights, we’ve all seen every punch and every kick. It’s more about how we make the fights fun, emotional and memorable.”

The stunt team worked closely with production designer Roger Fires to ensure the setting was movement and action-friendly. “The bus scene had to be the most impactful stunt not only because it is the first action sequence in the movie but also because of the emotional aspect behind it being Hutch’s transition,” Fires says. “We discussed what would be the most effective way to provide full freedom for Bob and his talented stunt team to create and move. We thought about cutting the bus in half to almost create the same feeling as the hallway scene in Old Boy, but in the end we decided to keep the space almost claustrophobic and move only what was necessary for the shot. The idea was to represent Hutch’s constraints before he releases back into the world. To help the production we made all the seats easily removable and the entire floor was laid with stunt pads.” 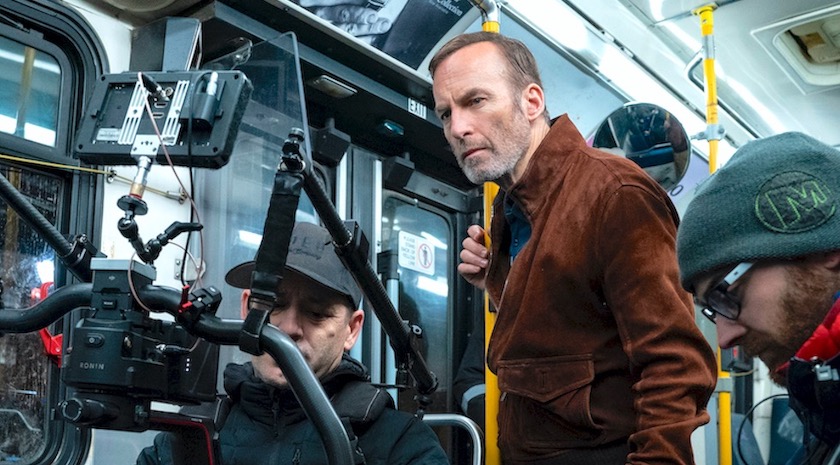 The filmmakers knew that the success of this scene would either make or break the film. “I knew it,” Naishuller says. “Bob knew it. Everyone knew it. The tension of getting it right hung in the air. We were all aware that Bob had prepared the hell out of it, and that he was going to be good. Except Bob. He was nervous. The stakes were high and he felt the pressure. Two years of Bob’s training came down to this night of shooting. Bob went and just killed it. Punch after punch. Take after take. The stunt team and I were elated at what we were seeing. The crew went nuts. When we wrapped that night, I got home and wrote Bob an irregularly short email. It said: ‘You’re a f**king action star.’”

Read our review of ‘Nobody’  HERE