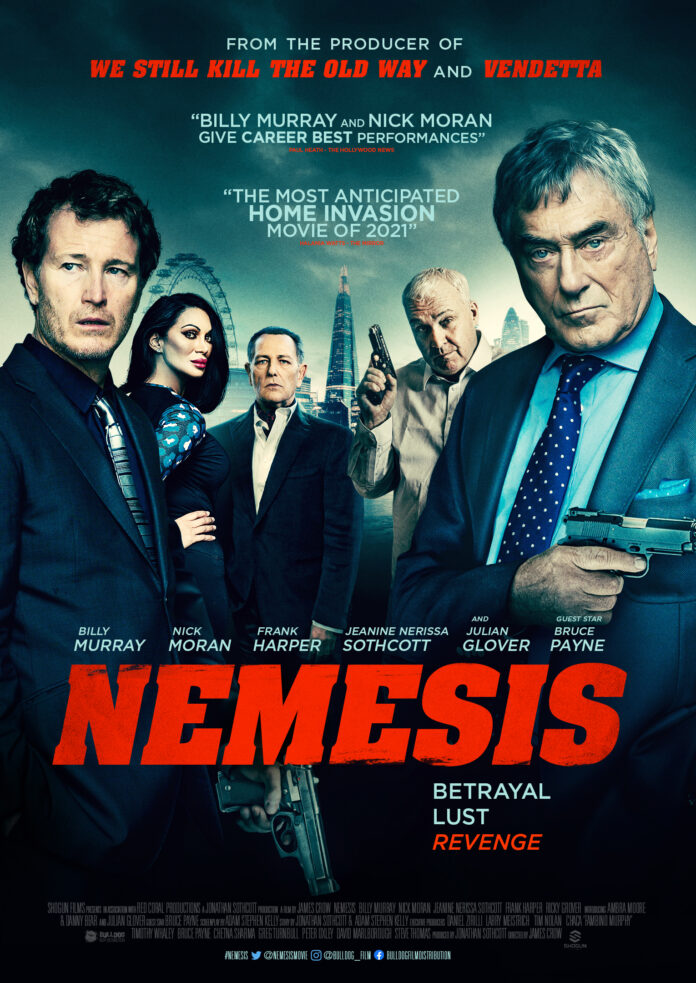 According to Bricktop played by the incomparable Alan Ford in ‘Snatch’, a nemesis is, ‘A righteous infliction of retribution manifested by an appropriate agent personified in this case by a horrible…..’ well we’re a family read so we won’t finish off his description.  The nemesis here comes in various forms when villain John Morgan (Billy Murray) returns to London with his glamorous wife Sadie (Jeanine Nerissa Sothcott). For a start there’s washed up cop Frank Conway (Nick Moran) driven to alcoholism in his years of trying to take down Morgan. Then there’s Morgan’s boss Sebastian (Julian Glover) who wants him to retire and clear off out of London and there’s Richard (Frank Harper), Morgan’s own brother, who has spent his life in his shadow.

So deciding to up sticks and clear off Morgan has one final family dinner using it as an opportunity to meet his daughter’s girlfriend for the first time. But if the Christmas edition of Eastenders has taught us anything it’s that every large gathering of cockney families over dinner demands that things must quickly go awry. And wrong it does go with Morgan quickly finding that those vengeful chickens from his inglorious past are coming home to roost with murder on their mind.

Nemesis is the latest from the prodigious Brit producer Jonathan Sothcott whose output is heavily indebted to the cockney geezer underworld of kingpins and killers and this is no different with the script based on a story of his. Like many of his films he secures some great though usually out of favour actors that in the past have included Ian Ogilvy, Martin Kemp and even Freddy Krueger himself, Robert Englund.  The villains in Nemesis are almost universally the whispering cockney with the veiled threat of violence that alternates with shouting f-bombs in moments of anger. The cast of these films are always part of the draw but its two actors from, ‘Lock, Stock and Two Smoking Barrels‘ namely Nick Moran and Frank Harper. Moran has worked constantly since his breakout role in that film and as a drink addled ex-cop he’s very good and Harper was always the unsung star of ‘Lock, Stock’ overshadowed by Vinnie Jones but he was always the most chilling and all too convincingly frightening face of simmering violence and he really should be a bigger star.

The template for many of these gangster films are the likes of ‘Get Carter’ and Guy Ritchie’s oeuvre but Nemesis lacks the twisty-turny story and the profane sparkly dialogue instead preferring to just keep it profane.  The script is exposition heavy and flabby especially in the final act and the action is clumsily handed with the Mexican stand-off making a comeback but filmed with a leaden hand.  Sothcott’s output as a producer is prolific and he assembles interesting casts (and here his own wife has a major role) but Nemesis is one of those films that would have benefitted greatly from a script polish.

NEMESIS IS AVAILABLE ON DVD & DIGITAL DOWNLOAD FROM 29TH MARCH 2021