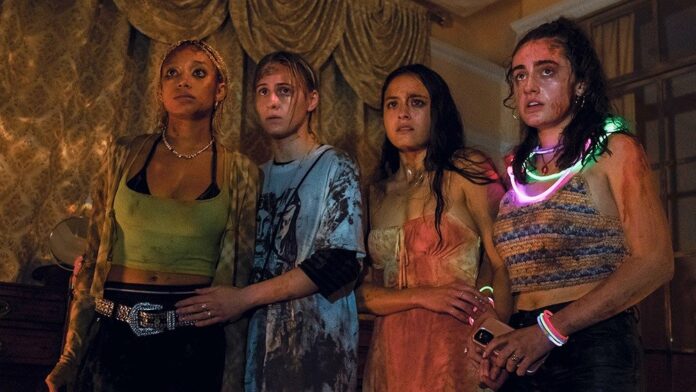 So a staple of the horror genre was the promiscuous teen getting slaughtered in gruesome style so when slasher film ‘Bodies, Bodies, Bodies’ opens with a close up of Sophie (Amandala Stenberg) and her new girlfriend Bee (Maria Bakalova) lashing each other’s tonsils with their tongues like some depraved dental hygienist their cards would surely seem marked. Sophie drives the pair of them to her extremely rich friend’s house (or rather rich friends parent’s house) where they are met with mixed greetings from Alive (Rachel Sennott), Emma (Chase Sui Wonders), Jordan ( Myha’la Herrold) and David (Pete Davison) and Greg (Lee Pace) an older male who, much like Henry in the recent ‘All My Friends Hate Me’, is something of an enigma and notably older that the rest of the friends. Yet he’s not as much of an antagonist as David whose parents house it is and is one of Sophie’s oldest friends who is clearly aggrieved at her new girlfriend turning up with her unannounced. Relationships between all six grow increasingly fractious as gay flirtations and minor disagreements blow up into full on arguments and as a ferociously fierce storm whips up outside the house so does the potential for the party to end in chaotic carnage.

With drinks downed and drugs dealt it’s Sophie, who’s had a stint in rehab, suggests a game of Bodies Bodies Bodies not some sort of morticians role play but a party game whodunnit where each gets a piece of paper, one of which has an X on it making them the killer when the lights are turned off. However whoever does have the X takes the role play literally and dead bodies start to pile up with the group growing ever more hysterical as they try to figure out just who is offing the group one by one in a house plunged into permanent darkness with the mercilessly storm lashing the house.

So though this might sound like ‘same old, same old’ this is far sharper than we’ve come to expect for this sort of thing where the victims might just as well have post it notes on their forehead saying, ‘I’m next!’.  Written by Sarah DeLappe this has whip smart lines for its Gen Z cast with sly digs at the culture with one character uttering the sort of blunt insights usually found on an influencers Instagram. ‘Relationships are really complicated’ being a particular favourite uttered by one character. It’s a script with sly anti-woke quips latching onto the latest fad, ‘I suffer from body dismorphia!’ claims one in typically lame style. Each character, for once, in this type of slasher horror, is well drawn and believable with a sharply scripted scenes and an enjoyable twist.

We spoke to director Halina Reijn about the making of the film….