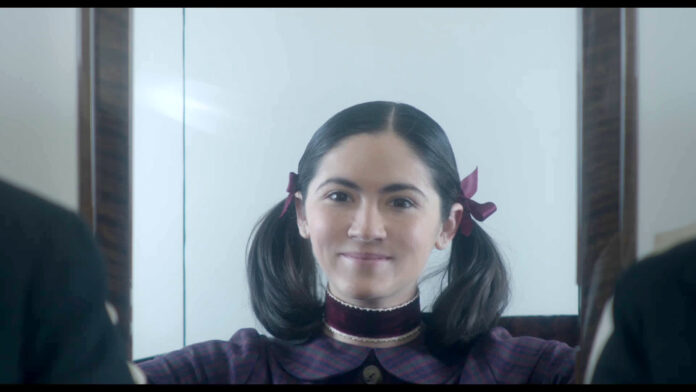 Though actress Isabelle Fuhrman is 22 years old her new film Orphan First Kill is a prequel to a film she made all the way back in 2009 and the film makers were set with the problem of now having to make the actress look even younger despite her now being 13 years older. A lot of things went right for the production when it came to being able to convince audiences that Isabelle Fuhrman was 13 years younger. “She still has a resemblance to when she was ten years old in her face,” says writer Alex Mace. “Which you can’t say for a lot of people!”

Doug Morrow served as the makeup department head and special makeup effects artist for Orphan: First Kill, collaborating closely with Fuhrman and other departments including camera, effects and even wardrobe to take off the years, predominantly relying on old-school Hollywood techniques. “One of the hardest things to do in makeup is to make somebody look younger than 8 they are, especially now with digital technology because it shows everything,” says Morrow. “So it can be quite a challenge.” As Fuhrman still has a youthful look to her face, it came down to rounding out some of her features with techniques that Morrow says are “as old as makeup.” He elaborates, “She has great skin, great features, great brows, and great lashes so it was more about emphasizing what she has, which was very easy. I ended up doing a heavier airbrush makeup, which really makes your skin look flawless. I did that in two passes: a heavier spattered on application and then the second application was more of a mist that smooths everything out. And then I used highlighting, shadow, or contouring in a very subtle way. I would take a highlight colour and put it on to make her face look rounder and I would do it on her jawline to give the emphasis that her jawline is not sharpened, which is what happens to a lot of people when they get older.” 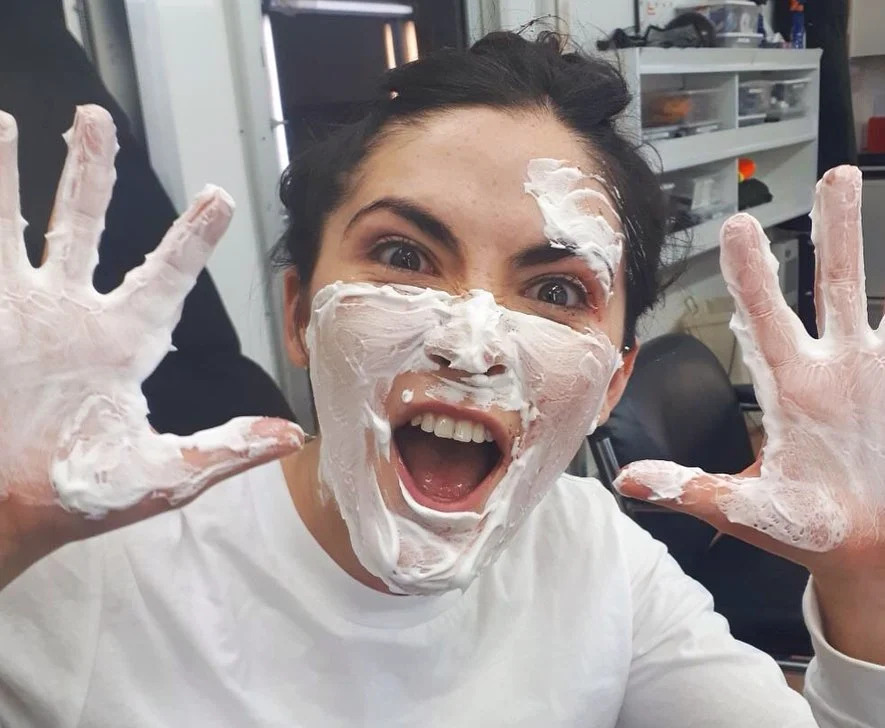 Morrow credits Fuhrman with being able to take what he was doing and really sell it. “Isabelle was really great with always coming up with ideas of how to make things work,” he says. “She was great to work with in terms of ‘Why don’t we try this?’” Fuhrman admits that the first makeup test in character startled her. “It was pretty trippy to see how it all looked and how it all came together!” she says. “I felt like the biggest shift we did was actually for my eyes. In the first movie, when I was a kid at the end of the movie, they got me contacts to make my irises smaller because as you get older the whites of your eyes become more prominent. So for this movie, I am wearing contacts that make my irises bigger. I thought it was really funny when I was wearing them because they made my eyes look so much bigger and it really shifted my age quite drastically.”

“Doug Morrow and his great makeup have really made Isabelle younger than her years,” raves Mace. “It was a real team effort. We always wanted it to feel grounded and that took some old school movie magic, some real filmmaking, and a lot of forced perspective, shooting at certain angles, body doubles, and stunt doubles. Our wildly talented cinematographer Karim Hussain not only has such an incredible eye but a real point of view, too. When he heard about the challenge that we were undertaking with Isabelle, he really got excited. It was a challenge that he wanted to be able to succeed in and he did so with flying colours. We’re proud that 90% of what you see is literally what we were shooting on the day.”

Some of that movie magic involved using Magnum bottles of wine to make Fuhrman’s hands look smaller, raising tables on apple boxes in certain scenes, and much to the real horror of her 9 cast mates, the wearing of very high heels to alter the perspective. “Walking in seven-inch platform shoes was something I fought for a long time in costume fittings,” laughs Julia Stiles. “But once I got over the humiliation of wearing Gene Simmons boots under my costume – and trusting that it was not going to be filmed that way, that they would cut it out of the frame – then it was okay. Until I realized that I’d have to run in those shoes!”

Fuhrman, too, had her own physical work to do. “I think the hardest part of the transformation, honestly, was that I had to squat a majority of the time while walking around the set, which was the funniest thing, but it was not so comfortable,” she laughs. “Although my legs have gotten very strong! I also had to constantly remind myself to act more childlike. 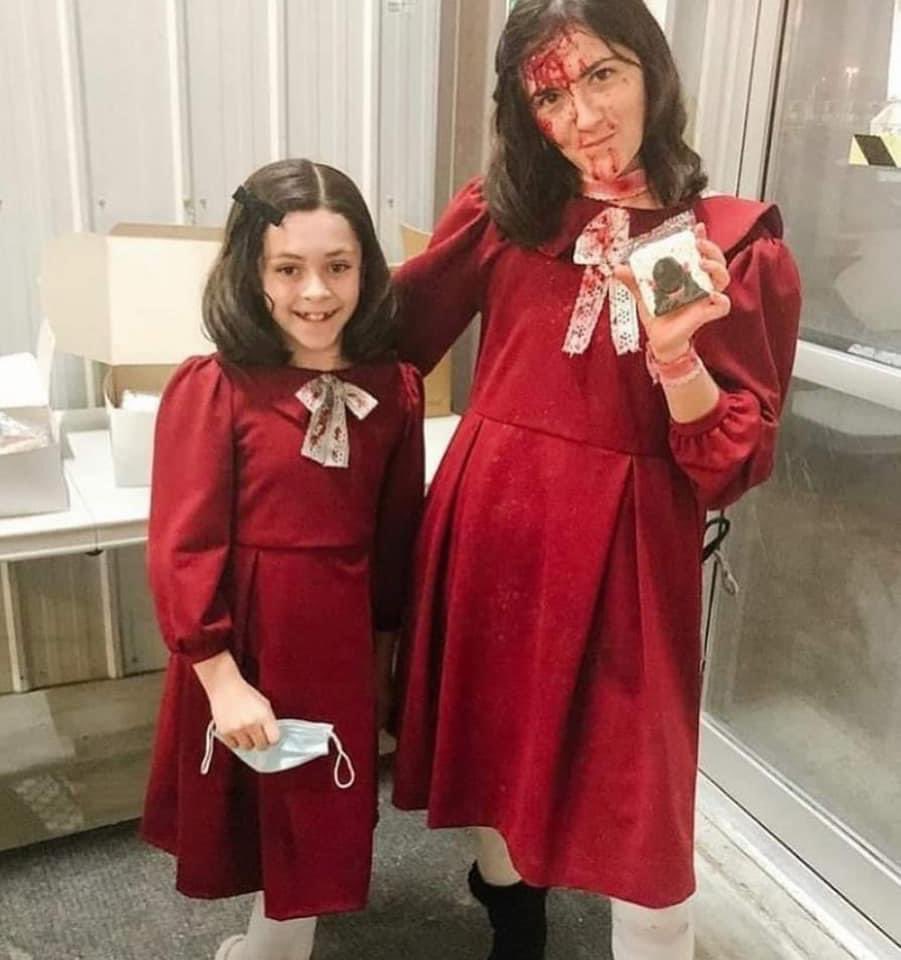 A lot of that really came from the doubles that I was really lucky to work with. We had two wonderful, wonderful young actresses, Kennedy and Sadie, who played my body for a lot of the movie and Brent gave me free rein to direct them because it is my performance. It was an incredible experience to get to play with these two really talented young kids.”

The final piece of the puzzle was for Fuhrman to relearn the dialect she had painstakingly studied for the first film and that meant reuniting with Orphan dialect coach Eric Armstrong. “I was lucky that Eric was available and so I zoomed with him every weekend,” shares Fuhrman. “I hadn’t done it in so long and I also had to pitch my voice higher because my voice has obviously changed since I was a kid. We would go through all the lines of the script and it was really cool to reconnect with him because they were only a few people on this movie that were also on the previous one.”

As director William Brent Bell and Mace reflect on how all of these elements came together to tell this story, they are proud that they managed to pull it off for the Orphan devotees. “I hope more than anything that the fans of the first film know how much we appreciate their opinions about the movie,” says Bell. “We know how much they loved her, how important this was to them and we took that really seriously. We took all these chances to make this work, which was definitely the right decision times a million. They’ll get to know Esther a little better and some of the things that they had questions about will be answered, too. I just hope they love it as much as we do.” Mace agrees, adding that he thinks people will love seeing this iconic character return in the most authentic way possible. “And I don’t think anyone’s going to see the twist coming because it becomes a completely different movie,” he says. “And I think the audience is going to freak out over that!’