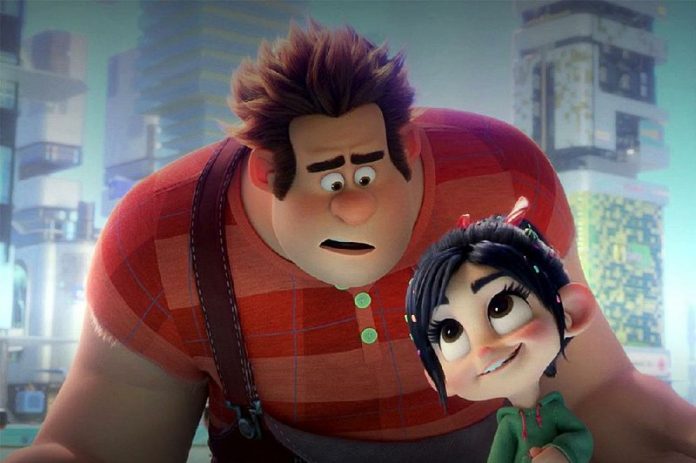 Although Ralph Breaks the Internet the last attempt to break it was by balloon bummed biffer Kim Kardashian, a woman whose backside is so large that she wears pants the same size of Devon and attempted to break the internet by presumably sitting on it. Thankfully Ralph Breaks the Internet has been made by talented people and carries on from where 2012’s Wreck it Ralph left off with former bad guy now loveable big guy Ralph (John C Reilly) best friends with Vanellope (Sarah Silverman). Both are characters in video games in an arcade and in an unusual moment of existentialism ponder their very existence as being only an amalgamation of ones and zeroes (something which they have in common with fellow zero Kim Kardashian).

Loving life and friendship Vanellope finds that when her arcade racing game that she stars in has its players steering wheel broken and the arcade manager decides to scrap the game as its too expensive to replace the part effectively eradicating Vanellope from existence. Ralph’s best friend would be gone forever and instead, knowing that the part can be bought on ebay, they travel the arcade’s newly installed wi-fi to the central server so as to buy the part on the auction site only to wildly bid over the odds not realizing that they now have to pay for it with money they don’t have.

This central server sequence is an astonishing product placement overload with just about every notable website clearly having paid up to have their logo in the film. Instagram, Pinterest, Facebook, Twitter, Snapchat, National Geographic, Google and obviously ebay feature heavily so quite whether the film was built around these or not is difficult to say. Either way it doesn’t detract from their race to raise the money before their time to pay ebay runs out.

Just about anything internet related is personified in Ralph Breaks the Internet’s universe from viruses and pop-ups to spam which here takes the form of Mr Spamly (Bill Hader) who points them in the direction of how they can raise the funds by playing games and finding treasure before they hit on the idea of viral videos. Interestingly it’s here that YouTube doesn’t appear but instead it’s replaced with Buzzzztube where Ralph appears in videos which will have a wide appeal.  But its when a virus that Ralph has instigated goes out of control that the film becomes almost nightmarish with a digital vision of Hieronymus Bosch proportions as Ralph attempts to rescue Vanellope.

Ralph Breaks the Internet is co-written by Phil Johnston who wrote the original film and there are some truly inspired moments with jokes about social media and the internet itself with a search engine predictive text type jokes and some on the mark comments about the inane nature of much social media. There’s even a dash of unexpected melancholy way for a Disney film. Best of all is that Disney have allowed the writers to poke fun at their back catalogue of films. The House of Mouse is normally and understandably very protective of their films and rightly so but here they poke fun at themselves in a superbly self deprecating style and it works wonderfully especially with all their Disney princesses who they send up in an hilarious fashion. And as Disney has so many franchises now including Marvel and Star Wars they have allowed some immensely entertaining gags .Like the best of Pixar this has jokes for both kids and adults and this is packed with verbal and sight gags that makes Ralph Breaks the Internet rewatchable.  Ralph Breaks the Internet is a brilliantly funny sugar rush of a film.