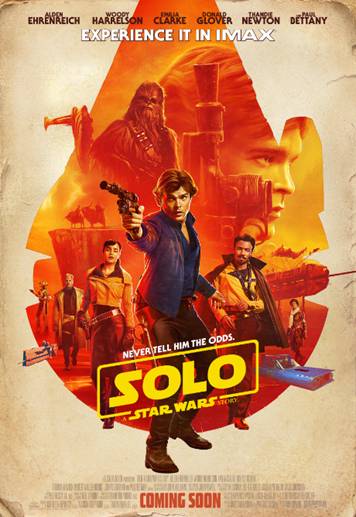 It doesn’t bode well for any film when its director(s) is fired, the lead actor needs acting lessons and what has been shot has improvisations and diversions from a script written by a respected Hollywood A list scribe. But that’s what is rumoured to have happened on Solo Star Wars story. Disney replaced the original directors Phil Lord & Chris Miller with Ron Howard who whilst not exactly visionary is a respected and stable set of hands and it’s believed that he set about reshooting much of what had gone before.

What we have a is a young Han (we find out later about his surname) trapped on an planet controlled by an underworld criminal that looks like a monstrous millipede and all are obliged to work for. Han (who is constantly called Harn throughout)and his love interest Qi’ra (Emilia Clarke – ‘Me Before You‘) plan to escape off the planet having got hold of a small amount of Coaxium, a valuable but explosive mineral.  It’s the quest for Coaxium that drives the story because Han and Qi’ra get separated and their love story remains a constant through the film when he later finds her three years later now as the love interest to  Dryden Vos, a superbly slimy and villainous Paul Bettany at last getting a decent role in a blockbuster. Vos is a supremely wealthy supervillain coasting around in a space yacht having lavish parties yet utterly ruthless despatching people who fail him without hesitation.  Frankly he could be a politician.

By the time Han encounters him he has met Chewbacca in a scene that’s not dissimilar from that below Jabba the Hut’s palace in Return of the Jedi and despite the love story with Qi’ra this is really the heart of the film with their burgeoning friendship and trust. They are now working alongside Beckett (Woody Harrelson) another villain who warns Han from the start not to trust anyone and having joined his gang they embark on a heist to rob a moving train of coaxium. It’s one of the best set pieces in the film and as thrilling as anything screenwriter Lawrence Kasden came up with for Raiders of the Lost Ark.  This was a job that Vos hired them to do and they find themselves in his debt and now having to do another heist to get more Coaxium but this time they take along Qi’ra.

It’s here that they encounter Lando Calrissian and his Millenium Falcon so fanboys who know the backstory will know what to expect. So yes we do get to see how Han gains ownership of the Falcon and yes the film does have the full story to that throwaway reference about the Kessel run done in 12 parsecs in what is another thrilling set piece.At 2 hours and 15 minutes the film never really falters as it rushes headlong from set piece to set piece and never really lets up with some amusing moments which might be a hangover from the original directors.

Solo Star Wars story has been well cast too with both Bettany and Harrelson who excel in their roles. For once Emilia Clarke having stumbled with Terminator Genysys has thankfully landed on her feet in Solo with a decent role and Donald Glover as Lando is good value too. An emerging element of these new Star Wars films are the robots / droids call them what you will because here we have L3 a brilliantly feminist forward thinking sidekick to Landon voiced by Phoebe Waller Bridge in what is one of the best supporting roles in the film.

So what of Alden Ehrenreich as Solo?  Harrison Ford, the moody cynical hard bitten original Solo was a hard act to follow and emulate and Ehrenreich (how do you pronounce that name?) his portrayal of the space cowboy is more playful and less sardonic than Ford and there’s no real sense of him being a bad boy more of him being a bit of a mischief maker. And Chewbacca? Well Peter Mayhew who played him throughout the original trilogy and The Force Awakens  is now 74 years and the reins have been handed over to Joonas Suotamo, a 6’11 Finnish actor, and he carries the role well.

For some fans Solo Star Wars story might disappoint because as an origin story this is not weighed down by the Jedi Mythology or The Force but that’s no bad thing here because the Solo character was never really part of that. What Ron Howard has given us with Solo Star Wars story is a thrilling standalone boys own adventure which will appeal across a wide demographic with its strong female characters, breathtaking action sequences, spectacle and story beats to satisfy the knowledgeable nerds……and it’s not spoiling anything to say that the momentary return of one character that promises to take any Solo film franchise in an unexpected direction.