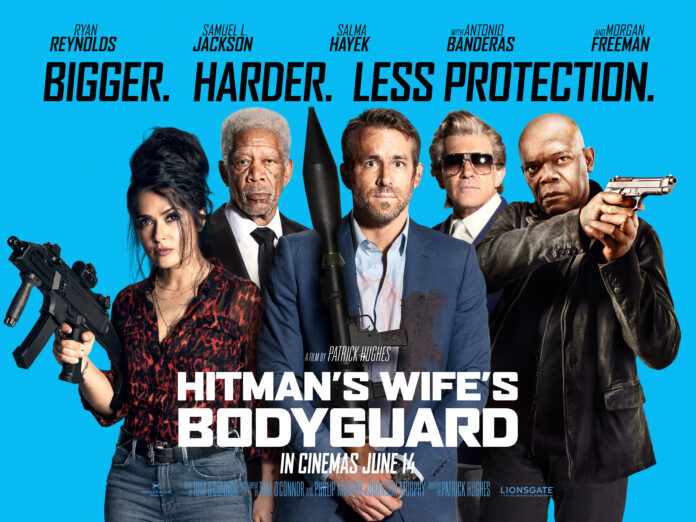 After the unexpected success of the first film (reviewed HERE)  we now have a sequel with a title as convoluted as its plot is simple. Having lost his triple A status as a bodyguard and haunted by nightmares of his last client, bodyguard Michael Bryce (Ryan Reynolds) takes a much needed holiday only to find himself in the middle of a shootout and rescued by the hot headed, potty mouthed Sonia (Salma Hayek) wife of his last client Darrius Kincaid (Samuel L Jackson) who himself is in Italy and needs rescuing from a bunch of Euro villains. 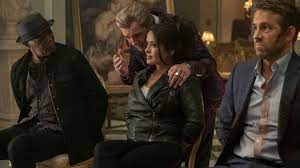 The three are soon embroiled in a plot that involves an underused Antonio Banderas as Greek baddie Aristotle Papadopolous seemingly monikered by a screenwriters big book of mix ‘n’ match Greek names that could only be made more so by making his middle name Moussaka. His intention is to bring Europe to its knees as an act of revenge for his home country having been saddled with debt in a plot line that was more relevant back in 2015 when this was all kicking off in a country where paying tax seems optional. His plot is essentially to drill a hole in a box of internet cables on the Mediterranean sea bed – a plot so simple that it could only have been dreamt up by the influencers who were at our screening. It’s Interpol man Frank Grillo, desperate to get back home to Boston, who recruits them to use a suitcase of cash to foil the Greek gangsters plan.

This sequel takes the original action and ramps it up by ten with the three stars essentially playing their usual screen personas of wisecracking snark, badass mutha and hysteria driven Latina and at times it becomes a little too much with Reynolds and Jackson shouting at each other and Hayek only too keen to join in against a background of almost unrelenting explosions and shootouts. The trio are coasting but clearly had a whale of a time making this (although in all honesty the best joke comes as the credits roll) with Salma Hayek squeezing into some eye popping outfits befitting of a sub plot about her wanting a baby. Directed again by Patrick Hughes he throws everything into the mix with non-stop action which is competently handled in a film that has one of the highest F-bombs counts we’ve heard in a while.

Here’s Salam Hayek at The Hitman’s Wife’s Bodyguard premiere getting potty mouthed at the audience…….

Here’s  the for The Hitman’s Wife’s Bodyguard……..