What has Amanda Holden got over Simon Cowell that got her hired as a judge on Britain’s Got Talent? Either that or she is a supreme negotiator in which case she should have been involved in brokering deals for Brexit , or with North Korea or Afghanistan or better still just send her there anyway.  Here, The Negotiator is Jon Hamm (Baby Driver)  in one of his better roles since turning to feature films after TV hit Mad Men. Starting in 1972 he plays diplomat Mason Skiles based in Beirut with his wife and adopted child  when the CIA friend Cal (Mark Pelegrino) arrives at the party he’s holding and breaks a bombshell bit of news to  him whereupon tragedy soon follows.

Fast forward ten years and Skiles is back in the US brokering deals between stroppy belligerent redneck union leaders and frustrated management when he gets an invite and a pot of cash to return to Beirut now being torn apart by civil war. With a drink habit that makes out Editor look sober he takes the deal, only to find that it’s to negotiate a hostage exchange of his friend Cal for a known terrorist.  He soon finds that no one’s really telling him the truth with what he’s being told being as believable as an MP’s expense claim form and there are double crosses galore with several characters riddled with corruption. 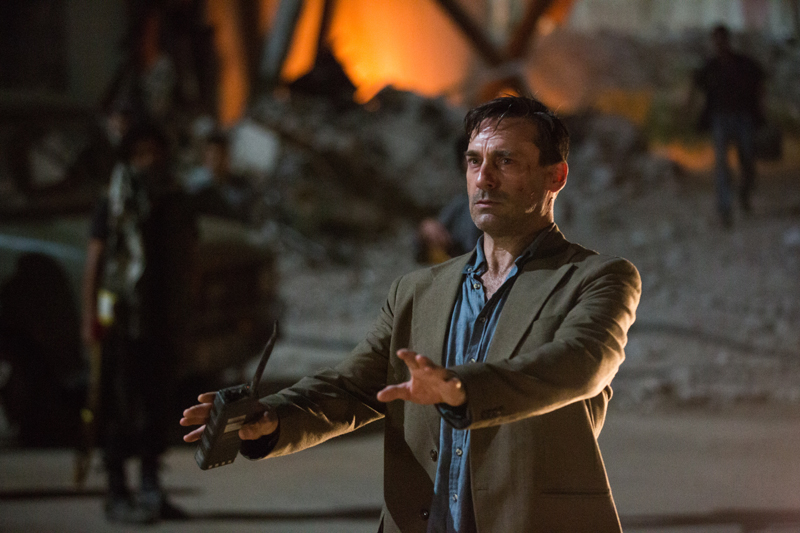 Rosamund Pike plays the only female role as a CIA operative there to keep an eye on him but who gradually comes round to his way of thinking as to how to get the deal done. In many ways this is the antithesis to the role she played in the recent ‘Entebbe’. Whereas there she is a Palestine  sympathizing terrorist here she is pro-US through and trough though even then she knows that her side is not as honest as they would like to think and even the Israeli’s are portrayed as opportunistic never really being as open with their US allies as you might think and Hamm finds himself caught in the middle of it all.

It’s a reminder that it was not that long ago when Beirut was torn apart and essentially reduced to rubble and it was only our Editor who was daft enough to invest in timeshare villas there.  A little over long but nonetheless the politics and just who could be believed are what drives the plot to its conclusion and the script written by Tony Gilroy, who also wrote the Bourne films and The Great Wall,  is  convincing and director Brad Anderson has recreated a believably grim and dangerous Beirut.

Here’s the trailer for The Negotiator……