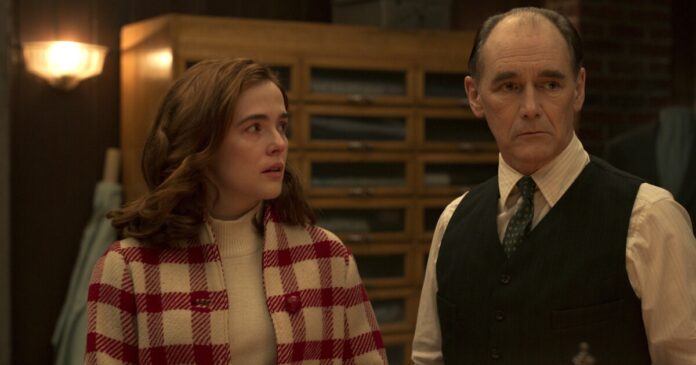 Today the wannabe criminals seem to hang about outside a high rise trying to act like a gangster. But the days of the well dressed Godfather type figures in sharp suits seems to have been replaced with dubiously stained sports wear and tracksuit bottoms hanging around the back of knees displaying supermarket underwear or easily identified market stall counterfeit designer underwear bearing the names of Calvin Kline or Ted Biker. The Outfit on the other hand is centred around the sartorial  elegance of Leonard (Mark Rylance)  a tailor, or a cutter, as he rightly prefers to be called telling those who wrongly label his occupation that anyone can be a tailor by sewing on a few buttons whereas becoming a cutter takes years to achieve. Right from the start Leonard is a stickler for details and in a voiceover he tells us about his ability to tell what makes a person tick from what he sees and hears. And he sees and hears a lot as he goes about his work in the back room of his business where mob men pass in and out dropping off and picking up letters, messages and parcels in a drop box in the corner of the room. He knows the type of people these men are yet they never really know the type of man he is.

Set in 1958 Chicago he has fled London’s Saville Row after the rise of, ‘ blue jeans’ or so he claims but as the story unfolds he has secrets of his own that come out. His clientele seems to comprise of gangsters and his shop is located on ground run by the local boss Roy Boyle (Simon Russell Beale) with his volatile son Richie (Dylan O’Brien) who is romantically entangled with Leonards receptionist Mabel (Zoey Deutch) . He is the Sonny Corleone to Roy’s Don Corleone and is eminently unsuited to running mob business and Roy can see it and is giving more responsibility to his trusted right hand man Francis (Johnny Flynn) much to Richie’s annoyance who never tires of reminding him who his boss is. But it all starts to unravel when Richie and Francis come back one night to the back room of Leonard’s shop with Francis shot by a rival gang and bleeding out. It’s compounded by the knowledge that there’s a rat in the organisation who has an incriminating tape that will be making its way to both the rival gang and the FBI.

In many respects this plays like a cross between Reservoir Dogs (a character is dying from a gun shot wound whilst they try and figure out who the rat is) and Hitchcock’s Rope (there’s a hidden dead body that is on the verge of being discovered) but The Outfit is very much its own entity. Written by Oscar winner Graham Moore (for his script for The Imitation Game) this is a thoroughly engaging 105 minutes with a game of potentially fatal brinkmanship being played out. Mary Rylance is calm and controlled in a serenely low key performance like his serenely low key performance in the recent Phantom of the Open. Like the film’s title the story plays on two levels (The Outfit apart from the suit making business is also a near mythical criminal organisation ) with secrets, twists and turns that engross albeit on occasion a little contrived. Set in a single location this is somewhat stagey but director Moore is as precise and neat in his plot construction and angles as Leonard is at putting together the clothes he makes.  The Outfit is ideally ….um……suited for anyone wanting a riveting drama.

Here’s the trailer for The Outfit……