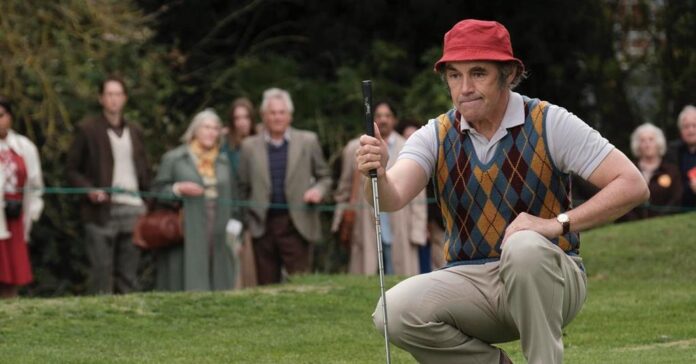 So whilst America is obsessed with success here in the UK we revel in being catastrophically bad. Even in sport where albeit we do well in the Olympics when it comes to our national sport, football we’re still celebrating a sole 60 year old World Cup win. Even the recent Euro championship saw us fail at the final game, coming second effectively making us the best of the losers. Like 2015’s Eddie the Eagle that followed skiing underdog Eddie Edwards, a man who had about as many successful jumps as a monk and Phantom of the Open celebrates another celebrated though now forgotten sporting disaster Maurice Flitcroft (Mark Rylance) who wangled his way into the 1976 British Open and made an absolute delirious spectacle of himself scoring the worst score ever recorded in the tournaments history.

It’s little of a surprise as he was a middle aged shipyard crane operator who had never played gold before and only entered because just as he was turning off his TV for the night he caught a glimpse of Tom Watson with his putter downing a ball. This was the mid seventies , a different era for sport  and Flitcroft fills an application, sends it off and finds himself on TV as he participates in the tournament to disastrous effect (he plays against the films writer Simon Farnaby who wrote the book the film was adapted). It’s his ludicrously bad efforts that makes him something of a cause celebre but it’s never made clear in the film whether he is a bit of a prankster or whether he just wanted to have a go and in fairness he has a point when he says that the British Open should be like the FA Cup where the little teams have a chance of winning. There does seem to be something of the prankster about him though in an hilarious segment where he manages to gain entry again this time with as a French man with a name that pokes fun at his pompous shipyard boss. As it turns out he managed to get into golf tournaments a number of times thwarting the efforts of a stuffy golf club secretary (the always excellent Rhys Ifans).

Rylance is as good as ever as the softly spoken Flitcoft who dearly loved his wife (an underwritten Sally Hawkins) and Phantom of the Open is in that glorious British tradition of celebrating the inept underdog.

Here’s the Phantom of the Open trailer…….

Avatar The Way of Water – REVIEW