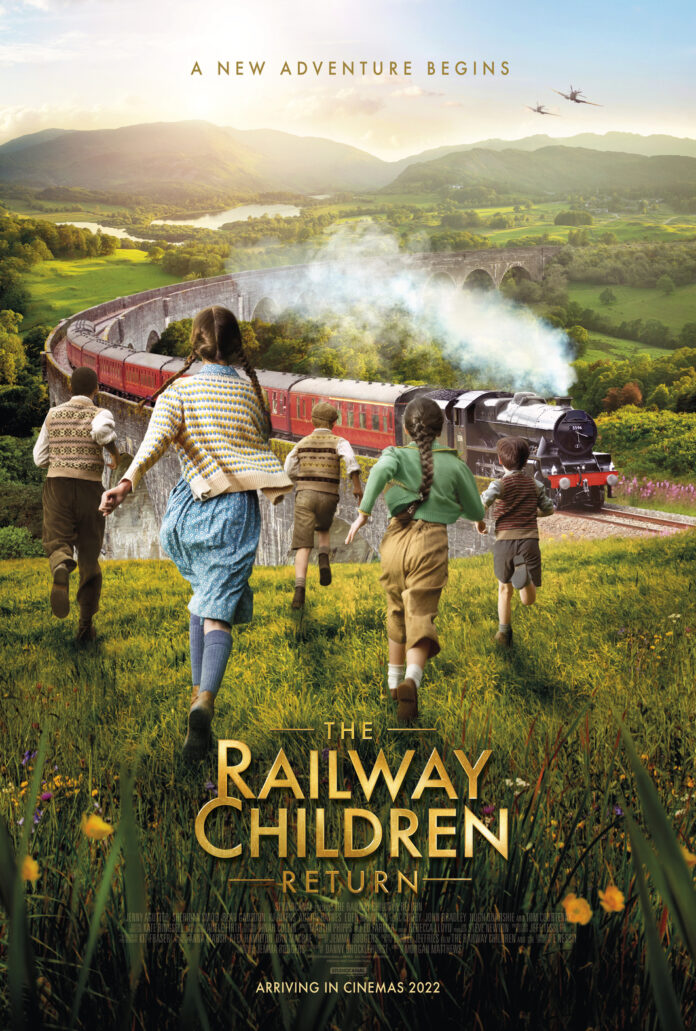 Harking back to more innocent times was The Railway Children released in 1970 when the dangers were TV presenters and a glam rock pop star and though most of them are doing porridge perhaps now is the right time for a belated sequel with The Railway Children Return. Set in 1944 Jenny Agutter is now a grandmotherly Bobbie who has stayed in the beautiful Yorkshire village.  With her is daughter Annie (Sheridan Smith)  with her own son Thomas (Austin Haynes)  whose father is away fighting Germans with the RAF. But the family is to extend with the three evacuees from Manchester:  Lily (Beau Gadsdon), Pattie (Eden Hamilton) and Ted (Zac Cudby) who are taken under the wing of Bobbie & Annie.

The four children get involved in scrapes with the local kids at the local school where Annie is headmistress and befriend the local station master (John Bradley) grandson of Bernard Cribbins’ original station master. The friends spend much time running around the glorious Yorkshire location but this sequel nods to perhaps a more political edge of the era when the children come across a young black US solider hiding in a railway carriage telling the children that he is on a secret mission whereas in truth he has having gone AWOL from his platoon. His backstory reveals a not widely known racial tension between the American military police and the black GI’s seen in a flashback where the MP’s brutalize them one night outside a dance hall. The children, promising not to reveal his secret mission and location, now agree to hide him in their house.

The original film remains a much loved children’s classic that still elicits a teary eye with that end scene as their father returns from the war emerging through the steam on the station platform to the cry of Bobbie’s, ‘Daddy, my Daddy!’ The Railway Children Returns doesn’t have an scene as emotional as that though there is a homage within a dream and this sequel does have further nods to the original as the children attempt to stop a passing train with homemade signs. This sequel has occasional moments of gravity acknowledging racism and a throwaway line with a subtext about immigration and a thinly veiled nod to Brexit though quite whether a scene where US military police would arrest a British child and slap them in handcuffs is debatable. But that said aside this is genial enjoyable stuff filmed in the same location as the original film which has remained resolutely the same despite  the 52 years between films. Jenny Agutter and Tom Courtney as a genial uncle figure are a reassuring presence and Sheridan Smith is as good as she always is and unlike the original film the British children, two of which make their film debut, are the right age for the roles and are delightfully endearing.

We also spoke to Sir Tom Courtney & John Bradley about the film too….

And the children told us some stories about what went on behind the scenes….

Director Morgan Matthews told us about the making of the film….