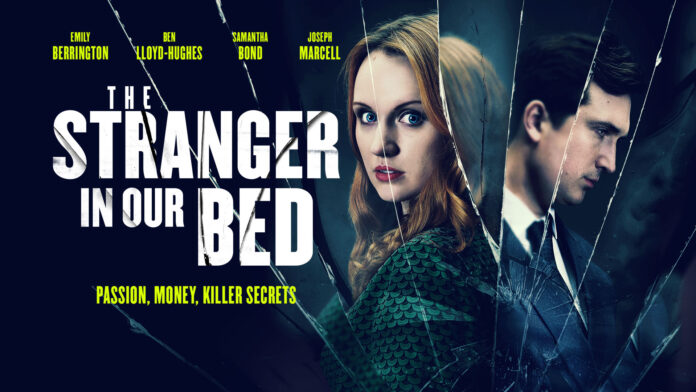 Based on the book of the same name author Samantha Lee Howe screenplay it purports to be ‘inspired by a true story’ and here Charlotte (Emily Berrington)  apparently happily married to successful business man Tom (Ben Lloyd –Hughes) who also has a hobby with photography and would appear to be the last person still to be using a film rather digital camera. (Our Editor was a keen photographer back in the day and was a serial dater unable to understand why he would be dumped within minutes after offering to show them round his photographic dark room to see what develops (‘You’re fired!’ – Ed)).  Their seemingly perfect marriage is anything but. Tom is manipulative and controlling so it’s little surprise that Charlotte has been having an affair with Ewan (Bart Edwards) who has disappeared overnight and there’s doubt cast over his very existence when she calls at his mews flat where the door is answered by a woman who has never heard of him and claims to have lived there for years.

Aware that their marriage is falling apart Tom attempts to salvage it with a break at the family’s country pile where the discuss starting a family, though frankly as Tom has the sort of trigger hair temper normally associated with a family of travellers having polished off pizza, desserts & drinks galore at a Pizza Hut before demanding a full refund because there was a hair on the final pizza slice, is probably not the best of ideas. Confused, Charlotte begins her own investigation into what’s happened to Ewan and befriends his sister Becki (Terri Dwyer who also produces) and bit by bit the mystery unfolds.

The Stranger in our Bed has two believable leads with Berrington and Lloyd-Hughes and it’s a savvy bit of casting as they are a real life couple enacting an on-screen relationship that is both turbulent and increasingly violent. Perhaps best known for TV series ‘Humans’ and the flirty happy go lucky love interest to Will in ‘The Inbetweeners 2 Movie’ Emily Berrington is especially good as Charlotte wanting her marriage to succeed but it’s clear that Tom has all the emotionally stability of Donald Trump losing on an episode of Deal or No Deal. There’s equally good support from Terri Dwyer who has always been a reliably good actress and now produces this her second feature which is very much a female led project with appearances also from the excellent Andi Oshi and Samantha Bond as the nightmarish socialite mother in law.

Directed by Giles Alderson, who has a number of short films and TV series to his name, this is neatly handled drama that holds the attention until the third act where it does fall down with the mystery having been unveiled in a major piece of ungainly and improbable exposition that is shoe horned in. Nonetheless there’s enough here to draw audiences in and Emily Berrington deserves to have a similar successful career trajectory as Laura Haddock who also had a lead female role in the first Inbetweeners movie.

We spoke to actress and producer Terri Dwyer about the making of the film….

Here’s the trailer for the Stranger in our Bed…….

The Mitchells vs the Machines – NETFLIX