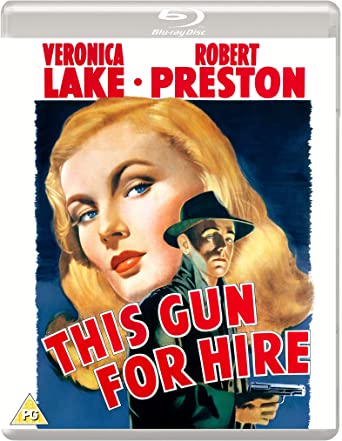 Made in 1942 ‘This Gun for Hire’ was an adaptation of Graham Greene’s 1936 novel, A Gun for Sale, although that as no the title that it was published under in the US. Optioned by Paramount Pictures it was put in to immediate pre-production with a cast announced (Gertrude Michael and Ida Lupino) but it soon came to a halt only to be revived 5 years later with a screenplay by Albert Maltz and W.R. Burnett  and filmed in 1941 by director Frank Tuttle and released in May 1942 with  Alan Ladd and Veronica Lake who were both stars rather than actors.

This Gun for Hire was an early example of film noir, a style that emerged during  World War II with its harsh lighting, morally ambiguity and themes of betrayal and downbeat climatic scenes.  Fritz Lang,  Otto Preminger,  Billy Wilder were the best known directors known form noir throughout the 1940s and into the 1950s – All were Jewish and had emigrated to the US to escape Europe before the Nazism had taken hold. 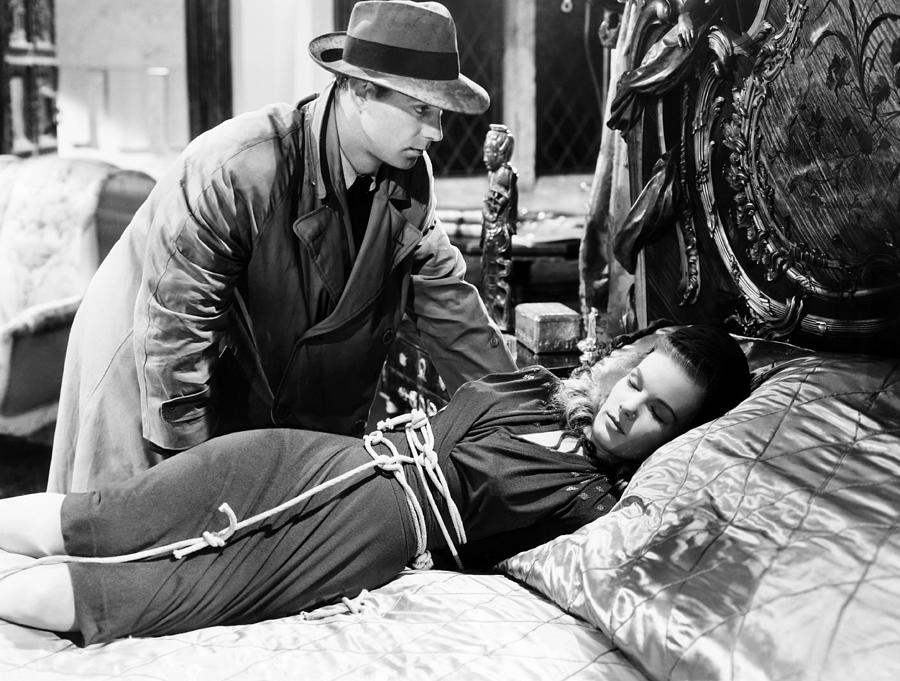 The novel, A Gun for Sale follows Raven, a talented British hitman, hired to provoke war by assassinating a high–ranking minister in a European government. It is not the book’s plot (which follows Raven out for revenge against the double–crossing war profiteers who hired him). Paramount’s take on A Gun for Sale moves the novel’s action to California, where Philip Raven (Alan Ladd)—a cold–hearted killer with more affection for cats than people—is hired by the upper–class Willard Gates (Laird Cregar) to kill Albert Baker (Frank Ferguson), a chemist and blackmailer. Shortly thereafter, it is revealed that Gates is acting on behalf of Alvin Brewster (Tully Marshall), a rich industrialist and the owner of Nitro Chemical. As in the novel, Raven is double–crossed by his shady employers, leading him to get tangled up with nightclub singer Ellen Graham (Veronica Lake)—who has been tasked with investigating Gates by Senator Burnett (Roger Imhof)—and her cop boyfriend Michael Crane (Robert Preston). Together, Raven and Graham uncover a criminal conspiracy involving plans to sell the formula for bromine, a volatile poison gas, to the Empire of Japan.

The release of This Gun for Hire coincided with America entering World War II and the film had been nearing the end of its shoot at the time of the attack on Pearl Harbour temporarily disrupting production for a week. The book’s themes suddenly took on a relevance and potential for propaganda.

While it is certainly morally ambiguous in some regards it should be noted that while direct references are made to Imperial Japan, it remains an intangible threat throughout the film. Its real villains are wealthy and corrupt Americans with no qualms about letting their countrymen die so that they can profit and the film’s strives to highlight their appalling indulgent decadence. So whilst Raven spends the first half of the film living in a derelict boarding house and it depicts evil as one solely born of making money because the villain’s unscrupulous money men and its heroes are people just trying to make a living regardless of the law.

Alan Ladd as the killer received fourth billing for what was one of his first major roles and the original Raven was an unattractive asexual figure with a harelip and with suffering from memories of a murder he had committed.  In the film however Raven is Hollywood handsome with little dialogue which always worked better in film noir.  Veronica Lake has little to do beyond displaying a delicate femininity unlike the blonde bombshells seen on screen at the time. At the time Hollywood crime films were strictly monitored due to the believed ability to inspire copycat behaviour when the gangsters glamorous but the censors were adamant that criminals must be seen to be punished or to benefit from breaking the law and Hollywood knew that the downfall of these characters would satisfy the censors and audiences. Also  there was a general sneering at crime films with the novels  Graham Greene such as Brighton Rock in 1947 were adapted with varying degrees of success.

This Gun for Hire is an exceptional film noir with Ladd and Lake in their most famous pairing having gone on to work together on several more films almost immediately in The Glass Key an adaptation of a Dashiell Hammett novel. Available on a 4k restoration on blu-ray for the first time the disc includes an audio commentary by Adrian Martin as well as a radio version of the novel with Ladd again and of course there’s the obligatory trailer.

Here’s a clip from This Gun for Hire…….