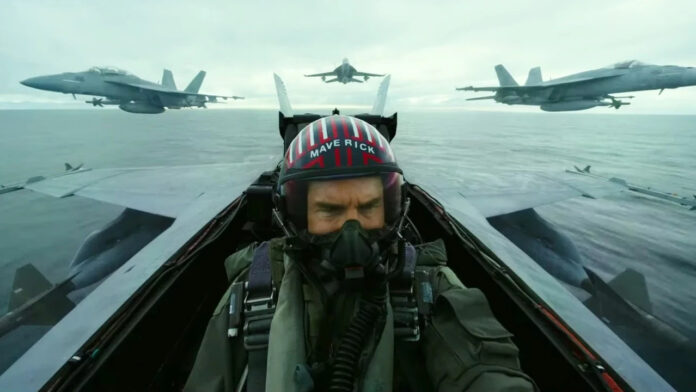 Held over from release since 2019 the sequel to the original film has been much anticipated and then the pandemic bought everything to a stand still and now finally 36 years later we have the eagerly awaited Top Gun Maverick with Tom Cruise back in one of his iconic roles as fighter pilot Pete Mitchell aka Maverick still doing what he does best, flying superfast jets to the brink in a bravura opening sequence that sees him taking a jet to a Mach 10 breaking point. Maverick is still a maverick preferring to avoid promotion to maintain his love for flying jet and in fairness the opening sequence is thrillingly shot and is enough to persuade anyone of the sheer visceral excitement of flying what are astonishing pieces of engineering

But Maverick has lost none of his ability – grudgingly acknowledged by his superiors but at the same them too putting himself at risk of never being allowed to fly again. So after his breaching of flying orders by Rear Admiral Ed Harris (who we’d love to have seen more of) he finds himself back at Top Gun school as a trainer with the current best in class pilots who regard him as something of a relic but soon proves otherwise to them. This new bunch of recruits all have the usual testosterone fuelled nicknames Phoenix (albeit this is a female pilot), Hangman, Payback, Fanboy, Coyote although oddly no one has the nickname ‘Blackbox Recorder’. Maverick has been bought in to train them on a seemingly impossible mission to destroy a plutonium refinery being used by an unnamed enemy which prevents the film from dating when our current adversaries become our allies presumably. It’s a mission impossible ( see what we did there?) with the pilots vying to be good enough to take on a mission that requires them to fly at perilously low altitude, avoid missiles and survive steep G-force inducing aerial climbs

Amongst these pilots is Rooster ( Miles Teller) the son of Goose and with a grievance against Maverick blaming him for his father’s death in the original film, a rekindled romance with Penny Benjamin (an always stunning Jennifer Connelly) who was mentioned in the original film as a former flame and then there’s his foe turned friend Iceman which sees Val Kilmer return in something of a tearjerker of a scene as the actor’s real life battle against throat cancer sees him struggle to speak a coherent sentence in much the same as, say, Brooklyn Beckham does albeit for different reasons.

There’s always a fear with belated sequels that they will fail to replicate the quality of the original and film history is littered with hugely anticipated sequels that have fallen flat on their faces and films as varied as Blues Brothers 2000, Ghostbusters (2016), Independence Day Resurgence. Thankfully Top Gun Maverick is one film that matches if not exceeds the original and director Joseph Kosinski, without resorting to CGI or green screen, has shot exhilarating aerial dog fights that have you gasping for air and the jets are both awesome and frightening when seen hurtling out of control with helpless pilots trapped inside.

Find out why Kelly McGillis is not in the sequel HERE

Find out how Top Gun almost happened without him HERE