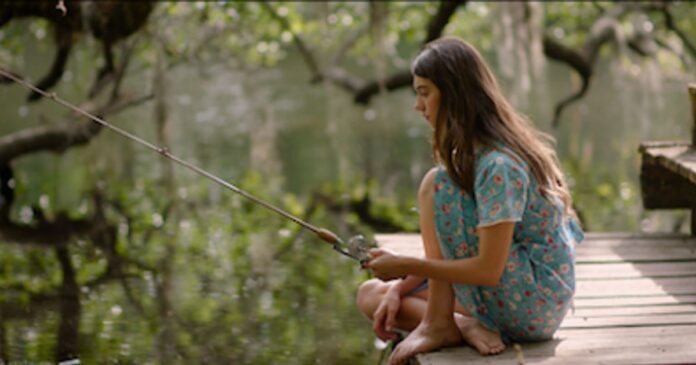 Based on a hugely successful novel by debut novelist Delia Owens and produced by Reese Witherspoon Where the Crawdads Sing opens in 1969 with the discovery by the sheriff of a dead body in the marshlands. The dead man is Chase Anderson (Harris Dickinson) an entitled rich kid who the film reveals in flashback had a relationship with Kya Clark (Daisy Edgar Jones) who lives alone in the uninhabited marshland and is labelled as ‘the Marsh Girl’ with all the imagination of the parents of David Davies. The Sheriff soon arrest her on suspicion of his murder with all the investigative power of a vacant eyed Poundland store detective and soon find herself on trial. Taking pity on Kya, who is subject to ludicrous town gossip, is a retired lawyer (David Strathairn ) and it is his case conferences  with Kya whilst in a police cell that brings out her backstory told in extended flashbacks.

Kya’s childhood sees her as the youngest of several siblings and an psychotically violent father too easily drawn to battering his wife, her mother, who inevitably ups and goes leaving the children at the mercy of their father who also soon follow leaving Kya, the youngest child with him. It’s one of several aspects of the story which lack any credibility as if the mother had not taken all of the children she would surely have taken Kya, the youngest, and for all the other children to go and leave Kya is just as unbelievable. With Kya soon on her own having to fend for herself she seems to live a somewhat idyllic existence never seeming to go hungry and the shack never looking less than a cosy quiet  weekend getaway and as Kya grows up she looks more like the product of a shampoo advert with her hair all luscious locks and the script swerving the opportunity to give her the line, ‘because you’re worth it.’

JoJo Regina as the young Kya is suitably adorable and her first and only day at school where she is mocked as a swamp rat is perhaps the only nod to reality as to how mercilessly cruel children can be. It’s little surprise that she flees never to return and grows up to be Daisy Edgar Jones who shows a talent for drawing the local marshland wildlife and forms a bond with local store owner (Sterling Macer Jr) and his wife (Michael Hyatt), a black couple who themselves are the subject of occasional racism and the only people who show Kya any kindness and compassion

Kya develops a relationship with local boy Tate (Taylor John Smith ) who leaves for college never returning to her as promised and after this it’s Chase who sets his eyes on her using her for his own salacious ends whilst keeping her a secret from his parents and therefore becomes the accused in trial that has all the credibility of a vow of fidelity by Boris Johnson.

Where the Crawdads Sing has two stories running in parallel – the court room drama and the love story that may indicate that she is indeed guilty of murder but is portrayed with such easily disproved circumstantial evidence that makes the outcome all too predictable.  The locations are beautifully shot but adds to the misty eyed portrayal of an independent woman glossing over any aspects of poverty, racism and hardship and plays more as an ode to nature.

Watch the Where the Crawdads Sing trailer HERE