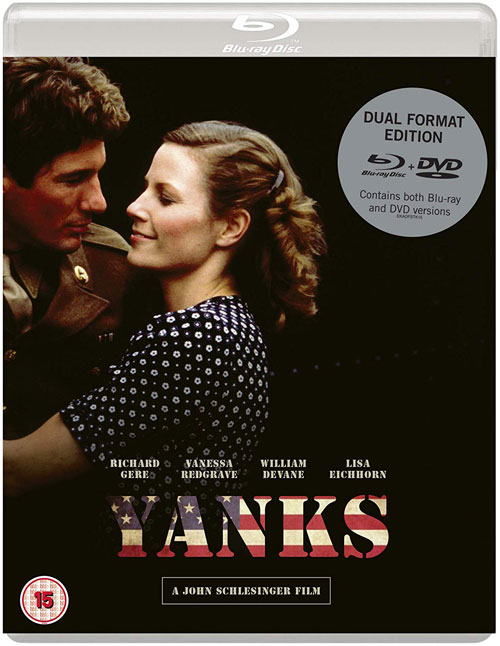 Richard Gere’s star was already in the ascendant when he came to be filming Yanks for director John Schlesinger.  He had already played the lead in Terrence Malick’s visually rich ‘Days of Heaven’ before the director went off on a 20 year retreat doing….. well, who knows what.

Set in the North of England during World War 2, Yanks was a war film without battle scenes focusing instead on romantic relationships between local women and US soldiers stationed there prior to the Normandy landings. It was an epic film running for almost 2 and a half hours having been forced by the studio to cut it down by 25 minutes (it was rumoured to include an early performance by Bill Nighy).

Yanks would have Lisa Eichhorn starring opposite Gere as his love interest in only her second feature film and complimenting their young love was Vanessa Redgrave and William Devane, who had worked on Hitchcock’s last ever film ‘Family Plot’. The film would also feature a number of well known British actors including Rachel Roberts and Joan Hickson who would later be TV’s Miss Marple. There would also be an early appearance by John Ratzenberger (the barfly postman from TV sitcom  ‘Cheers’ and Pixar voiceover favourite) and also Derek Thompson who would become a stalwart of TV’s Casualty for twenty years.

The Yanks was a deliberately derogatory term for the Americans by the Brits during wartime as many took the opportunity to make advances on the lonely women whose husband’s & boyfriends were away at war which was true of the romance between Gere and Eichhorn with her drawn between her loyalty to her soldier boyfriend and her growing love for Gere’s officer.

For director John Schlesinger Yanks was a passion project of his which he had been keen to make and after the success of the William Goldman scripted ‘Marathon Man’ he had the clout to make the film. Schlesinger had been part of the movement behind British kitchen sink dramas of the 60’s having made ‘Billy Liar’, ‘Darling’ and ‘A Kind of Loving’ to huge acclaim and was to go on to direct ‘Midnight Cowboy’ winning an Oscar in the process. He had served in the army himself and though he was openly gay he was familiar with the romances that went on during the Second World War. Written by Colin Welland, who himself would go onto  Oscar glory two years later with ‘Chariots of Fire’ and would be haunted by his cry of ,‘The British are coming !’ only to find that the following decade would see the British film industry career from one flop film catastrophe to another with films such as ‘Revolution’ and ‘Absolute Beginners’.

Released on November 2nd 1979 the film was a moderate success and was to be the last notable hit for its director before he crashed and burned with the lamentable ‘Honky Tonk Freeway’ an alleged comedy that cost $24m, a massive budget for a film at the time, and made a disastrous  $2m – hardly surprising when the films ‘highlight’ was a waterskiing elephant. Gere would go on to hit pay dirt with his next two films ‘American Gigolo’ and ‘An Officer and a Gentlemen’ which would send his star into the stratosphere whereas Eichhorn would next go on to appear in…..um…. ‘Tales of the Unexpected’ for Anglia TV.

Yanks was one of the directors most empathetic films but didn’t receive the audience it deserved on release despite Eichhorn being nominated for a Golden Globe and BAFTA paying Yanks further  recognition with seven nominations of which it won two for Rachel Roberts and also for Costume Design although it did win the Evening Standard award for Best Film. This release contains a high definition transfer of the film and bonus features are limited to the original trailer and archive interview with Schlesinger but there’s also a collectors booklet with some rare photos.