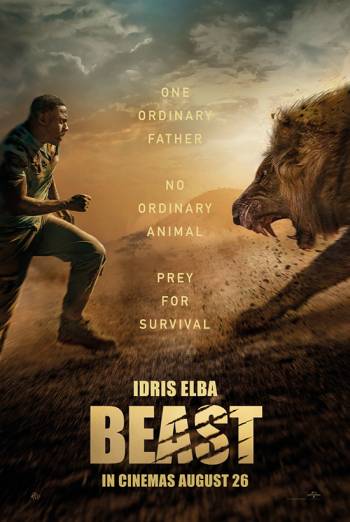 So with all the big budget blockbusters now long gone late August often sees the release of unexpected gems such as ‘Crawl’ a creature feature of an apex predator animal gone rogue. Beast is that movie too only this time rather than a flooded town prowled by alligators it’s the arid wilderness of the savannah where Dr Nate Samuels (Idris Elba) has taken his two daughters Norah (Leah Jeffries) and Meredith (Iyana Halley) who is a keen wildlife photographer taking the sort of wildlife pics that happy snapper Brooklyn Beckham could only dream of and fail to replicate when he decided one week that he wanted to be a photographer having bought a supermarket disposable camera.  Their destination is a place where Nate’s ex-wife and their mother grew up before they separated before she passed away from cancer. The daughters feel that their father abandoned their mother at her time of need and so Nate hopes the trip will help repair his relationship with his children and family friend Martin (Sharlto Copley) is only too happy to act as a sort of safari guide.  Except this is not going to be the sort of safari you get at Disney’s Animal Kingdom theme park because there’s a royally irritated king of the jungle here that’s never going to crop up in the directors out of The Lion King. The cause of this is due to Leo the Lion’s pride having been slaughtered by a bunch of armed poachers and for once the alliterative phrase ‘a roaring rampage of revenge’ is apt as every human is fair game

Written by Ryan Engle he immediately puts the kibosh on that genre staple- the mobile phone that doesn’t work at a critical moment – when the daughters arrive at the accommodation to find that there’s no wi-fi in a barren wasteland devoid of life and in that respect the film could also have been set in Newport.  The presence of the beast grows ever nearer and more ominous as the four drive their jeep through the savannah first encountering a badly injured man and then later the quartet arriving at a nearby village with the inhabitants slaughtered. Whether it’s the aftermath of the England fans world cup final celebration or it’s the result of Lenny the lion’s handiwork is soon confirmed when the beast, looking to feast, attacks trapping them in their jeep a la ‘Cujo’. What follows is Idris Elba in hero mode as he tries to protect his two daughters from the marauding lion on a mission to maul all humans in his manor after what they did to his pride….If he could talk he’d been telling them, ‘This time it’s personal!’

At 97 minutes Beast gets straight to the action with Idris going mano-a lion(o) with the CGI beast that looks increasingly ravaged as the film progresses. Whilst there are several moments where suspension of belief is a necessity director Baltasar Kormakur’s embraces the film B-movie creature feature origins never outstaying its welcome and yes that trailer moment where Idris punches a lion is here for a genre savvy audience to cheer in this enjoyable end of summer spectacle .