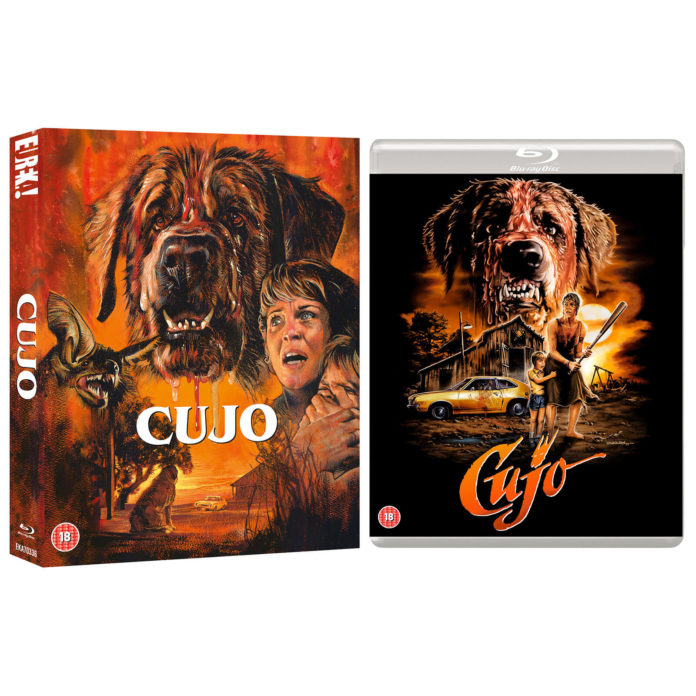 The Eighties had seen Stephen King as the go-to man for horror stories. Having emerged in the seventies with his debut novel Carrie which would become Brian DePalma’s breakthrough movie then King would go on to make his name with Salem’s Lot and then The Shining, a film he has been outspoken in his criticism of despite it being Kubrick’s most successful box office film. They all had something of the supernatural about them but Cujo was to be different.

King was already proving to be a prolific writer with his stories becoming epics such  as The Stand and intense (The Dead Zone) Cujo would see him write something a lot simpler and downsized. Inspired by a visit to a farm owning friend where he saw a huge yet benign dog in the farmyard and immediately recognized the potential for a story. Cujo was to be a stripped down story of an affable St Bernard dog bitten by a rabid bat and turned into a lumbering killer who entraps a mother and her young child in a car in the farmyard with no sign of any help. In a way it was a dog version of Jaws.

The novel had gone through several rewrites with a pair of TV writers writing the screenplay with Lewis Teague landing the directing gig. He’d not been the first choice but having made the brilliant schlock monster film, ‘Alligator’ he proved ideal for the material and together with DoP Jan De Bont who himself would go on to direct ‘Speed‘ the pair came up with a well crafted film of set pieces that produced some supremely effective jump out of your seat moments.

Though the star of the film was the dog (of which, depending on who you believe, there were anything between 5 and 12 dogs trained to do various stunts in the film) this was to be an early overlooked strong female role coming a few years after Alien. It was Dee Wallace who would take the role of Donna Trenton the protective mum of her young son trapped in the car with her. It was not to be an easy shoot for either of them because though this was a summer set film it was shot in winter and conditions were cold to such a degree that they had to have a heater installed in the five cars that were used for the shoot.

Wallace had made her mark with two hugely successful films that include The Howling and ET which at that point was the biggest earning film ever. Playing her son was 6 year old Danny Pintauro who had to be constantly reminded by Wallace that it was all pretend and make believe as the dogs did their thing. In fairness the production also used a mechanical digs head and even a man in a suit which were intercut with the real dogs who had their fair share of discomfort with their faces being coated in all manner of gunk including whisked egg white which had to be applied at the last moment before they licked it off.

The film did solid business and Teague would follow it up with ‘Cats Eye’ another King adaptation whilst Wallace, whose husband the late Christopher Stone also appeared in the film, would work on other horror films such as Critters and Alligator II.

The release of Cujo on blu r for the first time in a 2 disc version has a number of decent extras including a 3 part ‘Making of’ as well as an insight into the film by Kim Newman and a lengthy interview with Dee Wallace from a 2015 fan fest convention. There’s also a commentary by Lee Gambin who has written a book about the film plus a number of interviews with others involved in the film from stuntmen to casting directors, dog trainers and effects artists.

Smaller in scale than many of King’s other stories Cujo is an effective shocker with the script changing the ending from the grim and downbeat ending of the book with the film makers  fearing that audiences would feel shortchanged if it ended in such a way. None the less this was to be one of the better King adaptations which over the next few years would include The Running Man and the Lawnmower Man.