What could be more Christmassy than the story of an apparently recovered drug addict coming to stay with his mum and step dad whist he finds himself inevitably drawn into carrying out a drug deal? Well that’s what Ben is Back has a go at doing. Now to us Ben is Back sounds more like a revenge thriller albeit more for tweenies but here Ben (Lucas Hedges) who was good in the recent Boy Erased  is a recovering drug addict on a rehab programme funded by his stepfather but he turns up on their doorstep unannounced in the run up to Christmas much to his mum’s obvious joy. His mum, Holly, is played by Julia Roberts who’s now reached that stage in her career where those sexy glam roles in Pretty Woman, Notting Hill  and Hook she’s now too old for but is too young for the Meryl Streep / Glenn Close roles. So she’s now in that hinterland where she can comfortably and convincingly play these Mum roles, her most recent being in Wonder,  and to be fair with the glam roles behind her she’s able to play more interesting characters and compete with someone like Nicole Kidman for them.

But her joy at the unexpectedly early Christmas present quickly turns sour when, like Gemma Collins walking past Greggs, he’s unable to resist the lure of Class A drugs. Having remarried she now has two young children and his similarly aged biological sister Ivy who has little time for her druggie brother as contemptuous of him as a Bremain voter is of a democratic vote for Brexit. So she sets out a whole bunch of rules for him to abide by if he wants to stay for Christmas. 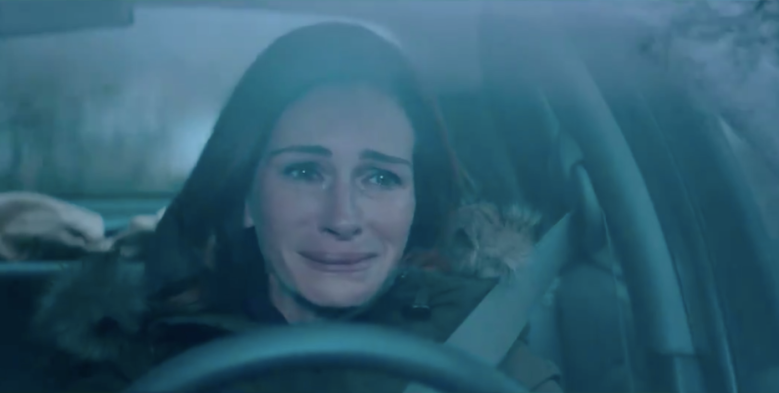 Ben is Back plays like a far more commercial version of Beautiful Boy and Ben’s urge to relapse is not as persuasive as Timothee Chalamet’s in that film. But this does have a stand out scene which puts his addiction into context when Holly takes him out shopping and encounters her friend whose husband, a doctor now suffers from Alzheimers. It’s this Dr who prescribed Ben the strong painkillers he became addicted to and began his downward spiral. Momentarily alone with him Holly delivers a blisteringly bitter diatribe at him which under normal circumstances would be reprehensible but here is understandable as she battles to keep him on the straight and narrow.

Holly’s battle to keep him off the gear finally comes to a head when the family home is burgled and their pet dog is stolen and its Ben who realizes who has the pet and why.

Ben is Back is an easier watch than Beautiful Boy but less convincing and the ending whilst inevitable is not  wholly satisfying. The problem with these recovering drug addict films is that the protagonist is rarely sympathetic. Ben is Back is one of those films that like Die Hard, will be on those list of films that you didn’t think were a Christmas film yet despite it being set in the season of goodwill to all men its only a mum who would or could love a recovering drug addict and its suitably appropriate that the film opens with the Christmas Carol ‘In the Bleak Midwinter’.