It was at a recent meeting our Editor had with investors that inevitably ended in disaster when one of the money men had a coughing fit that our Editor told him to try sucking on a fisherman’s friend. Yes, of course you can’t possibly have a film called Fisherman’s Friends without that old joke rearing its head and it’s got out of the way here pretty early on. James Mays (Swimming with Men) is Danny, a laddish music A&R man taking a break from discovering the latest boy band atrocity, so as to go on a stag do with a groom to be, their boss and another guy so bland and non-descript as to not be noticed when he goes adrift at sea when they all go surfing. In fact the destination for their stag do is bizarrely tame as it’s a small coastal Cornish village so small that the local prostitute is a virgin. Quite what the appeal is for the four London lads is never made clear unless they have an undisclosed penchant for cream teas.

It’s only after that their rescue from their surfing mishap that they come across 10 local fisherman standing in the harbor warbling away singing sea shanty’s and gangster rap (OK we made up that last bit) and its Danny’s boss, Troy (Noel Clarke), who tells him to get them signed up. Except having gained their confidence and signed them up he finds that it’s one of those ‘hilarious’ jokes that’s never funny. But this being a true story it can’t end like that and rather than let them down and probably end up sleeping with the fishes Danny takes it upon himself in a valiant attempt to get them a record deal and this being the archetypal feel good rom-com the outcome is inevitable.

The ‘rom’ comes in the shape of single mum Alwyn played by  Tuppence Middleton, sister of the less fortunately named Thrupenny Bits (‘You’re fired!‘ – Ed) and right from the start when Danny states that he’s dead against monogamy you know he’ll be loved up by the end even when the path of love, in films anyway, is destined to not run smoothly. It’s hardly helped when he has a hand in selling off the village pub to a London developer for a percentage himself – though quite why it needs to be sold is anyone’s guess when its got a crowd in there every night. As a couple they’re charming enough even if she’s a little bland with her over protective father who’s also one of the shanty chanting singers, understandably not wanting to see her hurt again. The singing fisherman, though there are ten, there are really only three or four notable speaking roles with the rest staying comfortably anonymous even if one looks like Adam Buxton of ‘Adam & Joe‘ fame and another looks like one of the Hairy Bikers who has wandered onto the set. 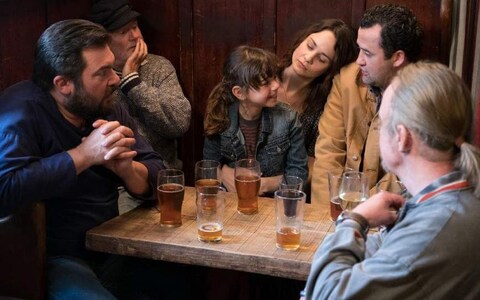 Fisherman’s Friends is that sort of cosy and at times twee Sunday night drama that British TV does so well and this is no different where the Cornish village wouldn’t look out of place on a clotted cream presentation pack and frankly so lushly photographed that it’s enough to make you leave London and head for the M5 and in that respect the real life location can soon expect to be inundated with tourists. Successfully emphasizing the friendly intimacy of village life to the anonymous cityscape of London Fisherman’s Friends is as much an ode to village life where, unlike Norfolk, not everyone appears to be someone’s brother or sister often at the same time but this has got feel good writ large and that’s no bad thing.