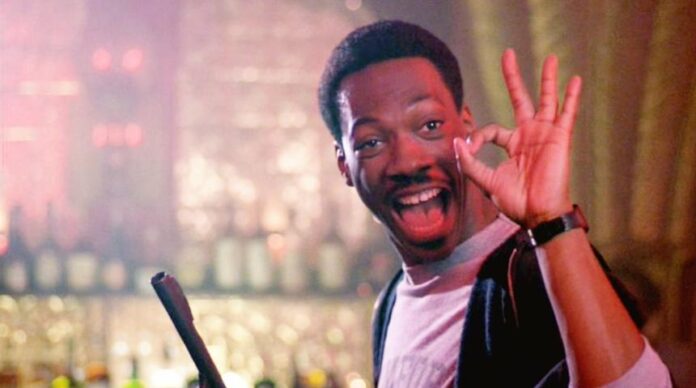 It’s been in development for years but now it finally looks like we have some Beverly Hills Cop 4 news that the long awaited sequel is finally going into production. The last film in the franchise was way back in 1994 and made just over a third of the money its two predecessors made at the box office and any fourth film was never considered. But Murphy’s had a bit of a resurgence with ‘Coming 2 America’, another belated sequel that was going to cinemas until the pandemic closed down cinemas.

Beverly Hills Cop 4 news has it that Paramount, the studio that own the franchise, have  sold the rights back in winter 2019, to a new film to Netflix and will now be titled ‘Beverly Hills Cop : Axel Foley’. Murphy will return in the title role and his co-stars will be Joseph Gordon Levitt, whose under rated thriller ‘7500’ is worth a look, and Taylour Paige who starred in the excellent ‘Zola’ (read our review HERE) . Directing will be Mark Molloy, an interesting and perhaps odd choice as his previous films have all been short films albeit a comic theme. He must be good though as Jerry Bruckheimer is producing the film and would have hired him. Scripting is Will Beall whose previous films have been DC behemoths, Aquaman and also Justice League.

Whether franchise favourites John Ashton and Judge Reinhold will return is unknown at present and it’s likely that this fourth film will probably hit the screens in late 2023 or even 2024.