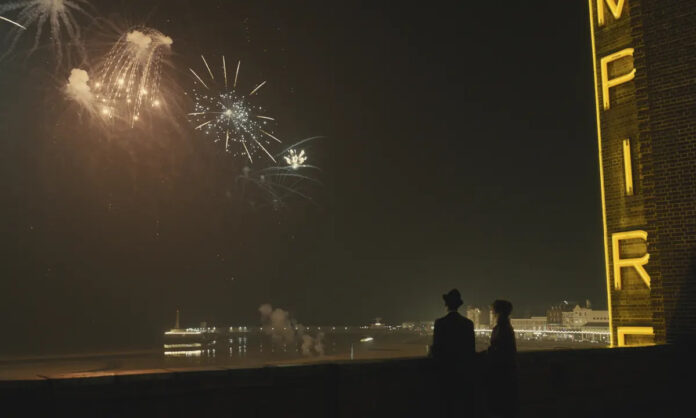 We’ve all got our own early memories of going to the cinema. Maybe it’s the first film you saw or perhaps for many it’s the lingering memory of that first kiss n the back row – it certainly was for our Editor and the stubble rash he got from ‘Uncle’ Barry (‘You’re fired !’ – Ed).  Here, the Empire of Light refers to the cinema where manager Hilary (Olivia Colman) works yet ironically has never watched a film there and in that respect it’s not dissimilar to the self-appointed ‘influencers’ we find at screenings only too keen to take a fatuous selfie yet rarely staying to watch the film – but early on its clear from  what appears to be a regular Dr’s appointment and his enthusiasm for prescribing lithium that Hilary has a troubled history that is sure to rear its head later in the film.

Empire of Light starts at a time when multi screens were emerging and uses the cinema hoardings to set the era with films such as The Blues Brothers and Peter Sellers last film, ‘Being There’ along with the confectionary concession where a box of sweets is 14p! But like Hilary’s fragile condition the cinema is decaying with two of its four screen already closed and an upstairs bar that is derelict and houses only pigeons where the character’s nurse one back to health in a kind of metaphor for what will unfold and like most small places of work Hilary’s colleagues become a sort of family.

Writer-director Sam Mendes places this latest film in Margate in the early 1980’s and is something of an elegy to the bygone days of cinema with grumpy projectionist Norman (Toby Jones) and a couple of staff along with general manager Mr Ellis (Colin Firth) a married man having an affair with Hilary using her for little more than a bunk up as he’s getting none at home. It’s when Stephen (Michael Ward) as a new usher arrives that the dynamic begins to change and the pair embark on a relationship that comes to an end with calamitous result with Hilary impinging on Mr Elli’s crowning moment when the Empire of Light holds the regional premiere of Chariots of Fire and it comes to a head in the cinema’s foyer in a barnstorming scene and one of several where Colman proves once again that she is one of our finest actresses.

A famous actor blacks up

It’s Colman who is front and centre with Stephen Ward excellent too as an educated man whose ambition is thwarted in a 1980’s Britain falling into recession. The film has a great soundtrack from the era and Stephen’s enthusiasm for ska music and 2-tone that embraced both black and white rubs off on the rest of staff. But as a black man in a Britain having to confront racism that would eventually culminate in race riots Stephen finds himself in an unenviable position in the seaside town and its mods & rockers fighting.

Mendes film is something of a labour of love and perhaps is more suited to a TV drama not having quite the scale and ambition of his Oscar nominated ‘1917’ but with its grim reminder of a Britain  in decline, ironic considering where the UK appears to be currently heading, the film offers heartfelt hope

Watch the the Empire of Light trailer HERE