Though Jack Nicholson always looks kind of cool in his sunglasses Bono tends to look like he’s lost his guide dog but in Free Guy the Sunglasses People have the best of both worlds as they find the dog then blow it up…at least that’s what likely to happen in the gamer world where the films is set. Like The Sims in Syria it’s a world of unremitting explosions and criminality where banks get robbed at gunpoint several times a day and no one bats an eyelid. One of those taking it all in his stride is Guy (Ryan Reynolds) a bank employee whose day consists almost solely of waking up, drinking coffee and going to work to watch it being robbed before going home again – it’s a bit like being a one of those 6 stone midget security guards that supermarkets employ. But Guy is unaware that he is a NPC (Non Player Character) in Free City a wildly popular game from a profitable tech firm headed up by Taika Waititi, as CEO Antoine,  an arrogant game designer  whose success was off the back of ideas he stole from two of his employees Millie (Jodie Comer) and  Keys (Joe Keery) . 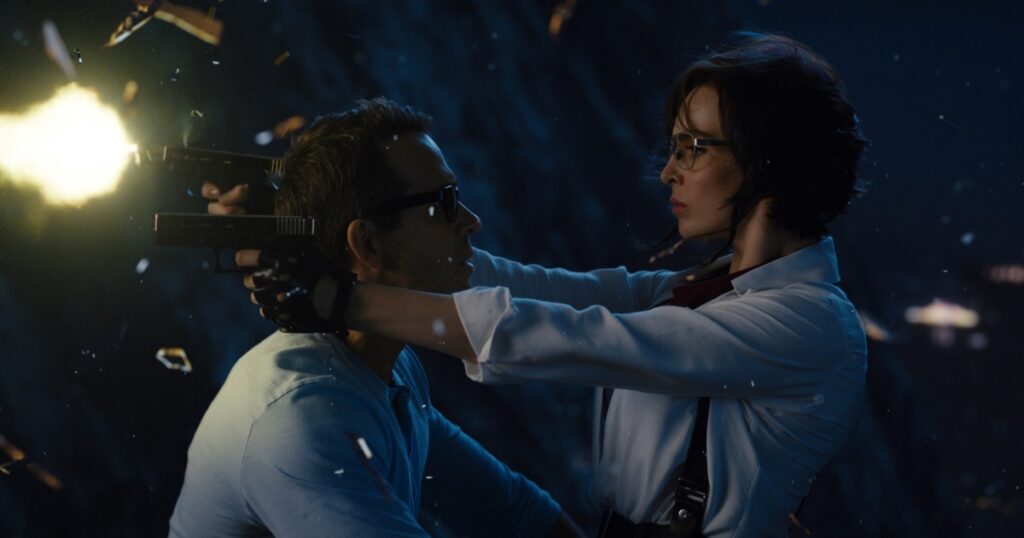 But they are fighting back by searching Free City disguised as the avatar Molotov Girl for the coding that Antoine stole and it’s in this capacity that she encounter Guy who goes off script assuming some degree of sentience and no longer staying in the background of the game. Besotted by Molotov Girl he has are awakening and becomes something of a hero in his bid to help her and in the course of duty he catches the attention of the world’s gamers captivated by his success and wanting to know who his real life operators is of the character they name Blue Shirt Guy whilst at the same time giving Antoine a headache because Guy’s popularity is hitting the pre sales of the sequel game that he’s about to launch. The race is on because the new game will make current one obsolescent and eliminate guy’s very existence. 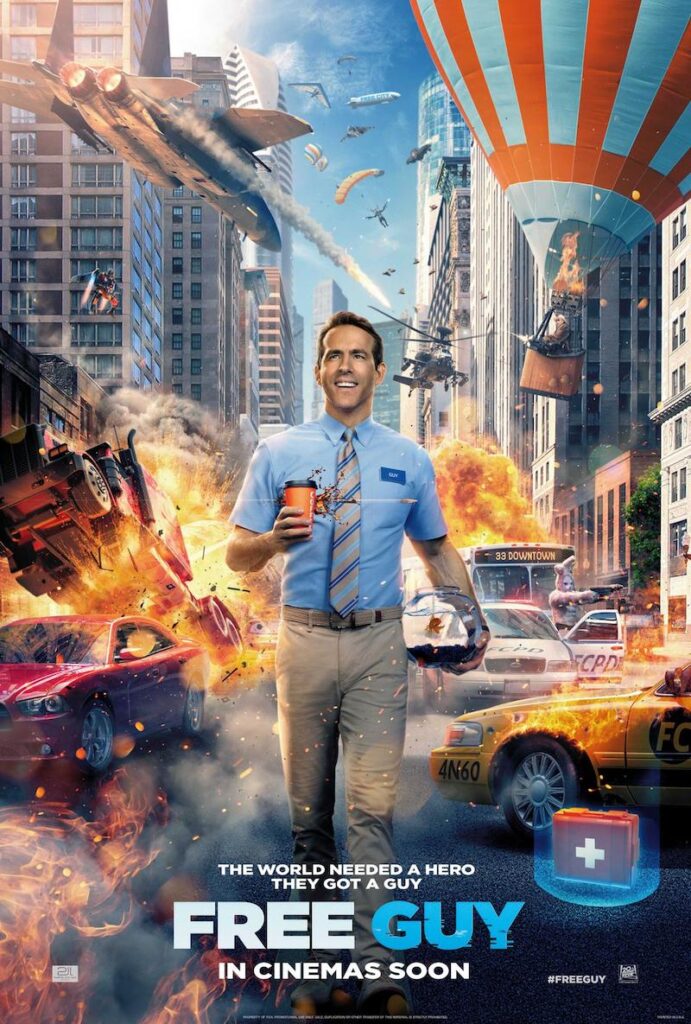 Playing like Grand Theft Auto meets The Truman Show there’s a lot to like in the first half that runs like a gamers wet dream in IMAX with much of the enjoyment to be had with what’s going on in the background in the same way as Space Jam 2 had you scanning the background for the cameos. With explosive action and all manner of bedlam going on in Free City it contrasts with the wide eyed innocence of Free Guy a sort of sociopathic man-child walking through a cityscape beset with carnage.  There’s an immense amount of detail going on and the money is all on the screen in that respect. But where it does falter is that the developing love story is insipid but it whizzes along at break neck speed rife with influences from other films that ranges from Star Wars to Marvel films and most notably John Carpenter’s ‘They Live’ where sunglasses allowed the wearer to see what was really going on and for Guy it’s a chance to see health packs, money bags and such other gamer staples. 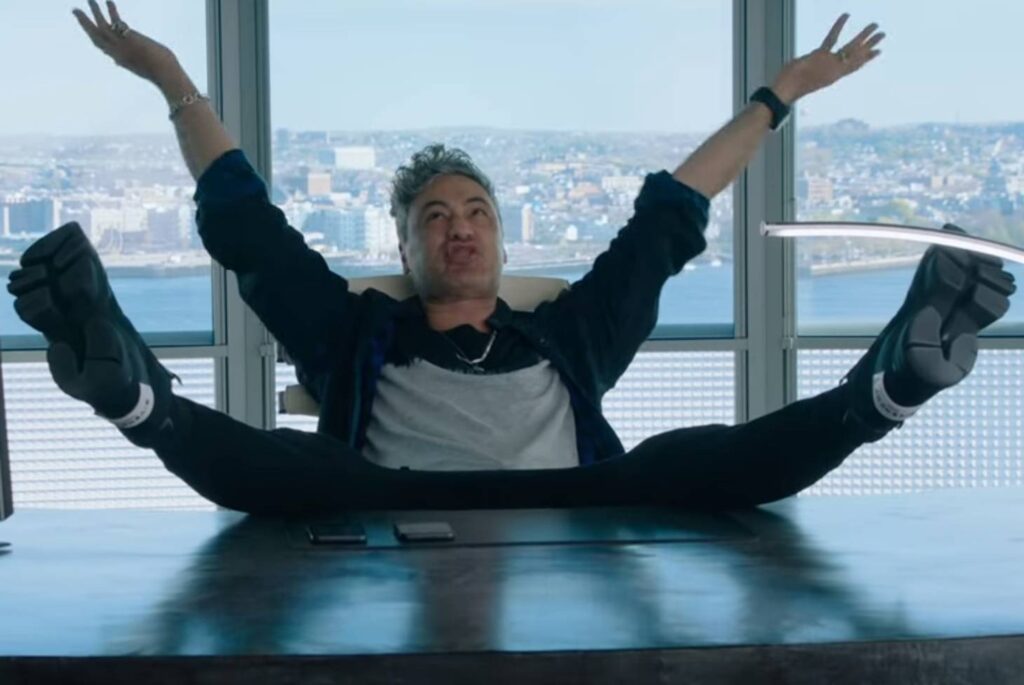 Reynolds is ideally cast in a role that’s a variation on his usual smart ass wise guy which like Robert Downey Jr, is in danger of forever consuming his acting roles. Jodie Comer is fine too but both her and others in the ‘real world’ are over shadowed by Taika Waititi’s a fantastic comic actor but his showboating villain really needed dialling down.   Co-written by Zak Penn (Ready Player One) there’s a subtext of existential angst and has the occasional line to prompt gamers to get off their arses – (‘life isn’t something that happens to us’) and there’s amusing portrayal of a gamer living with his mum. The recent documentary, ‘A Glitch in the Matrix’ (see our interview with the director HERE) about the sci-fi concept that we ourselves are merely avatars to be played would make an ideal double bill. So whilst gamers rarely relay they may want to with Free Guy if  only to pick up on the cameos and details in the background action.