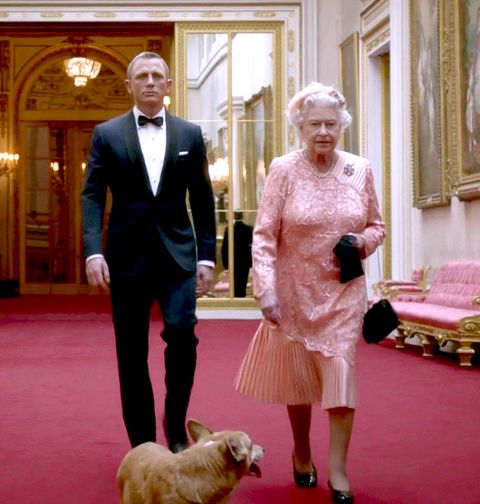 As big a success as the London 2012 Olympics was. probably the one moment that everyone remembers is the Queen skydiving from a helicopter with James Bond

It was the brainchild of director Danny Boyle who had won a Best Director Oscar for ‘Slumdog Millionaire’ and it was Sebastian Coe, who had been co-ordinating the campaign to have the Olympics take place in London, that wrote to him expressing his admiration for the film. A year later Boyle was offered the job to helm the opening ceremony. Frank Cottrell-Boyce was the writer for the Olympic ceremony but it was Boyle who came up with the original idea using two British icons : the Queen and James Bond and he set about writing the sketch that would fit in with the ceremony. Part of the of the protocol for any country hosting the Olympics was that you have to bring in the Head of State and sing the National Anthem. But Boyle wanted something different and came up with the idea of Bond escorting Her Majesty to the Olympics

There were two options for the sketch. Either he would use a double, an extremely close lookalike of the Queen, or he would get a world-class actor to play her which was likely to be Helen Mirren who had also won an Oscar playing The Queen in the film of the same title. Pre-production had already started and location scouting was underway to look for houses that could double for the Palace. All Boyle was seeking was royal permission for the joke. The producers approached the Palace enquiring what the Queen would be wearing on the night so they could dress their double accordingly. Boyle first pitched the proposed sketch to royal dresser Angela Kelly and the Queen’s private secretary Edward Young and it was Kelly who asked them to hold on for a few minutes whilst she went upstairs to ask the Queen, Boyle was stunned by the reply. The queen readily agreed to the scene but wanted to be in it too setting out  only a couple of conditions – that it was kept secret from her family and that she had a line too telling her dresser Kelly : ‘Of course I must say something. After all, he is coming to rescue me.’

Production stage manager Sam Hunter told broadcaster Kirsty Wark: “The Queen never told her family she was doing it. That was one of the stipulations when she agreed to be part of it.”

It was a surprise to many that The Queen so readily agreed to do it but it was believed that the Queen knew she would be involved formally in the opening ceremony in what would be the same year as her Jubilee celebrations and thought that maybe the public would tire of her appearance so she wanted to do something different.

Ironically it the film crew did not have to wait for her availability but rather the Queen had to wait for Daniel Craig’s who at the time was shooting Skyfall and had to be released from set. For Boyle it was initially nerve wracking with the director greeting The Queen’s arrival on set and enquiring after her welfare only for her to reply, ‘I’ve been to the dentist this morning, so I’m not in a very good mood.'”. He need not have worried with Boyle recounting that she was very co-operative and after giving her directions she did it perfectly in one take.

With Bond going to the Palace she is first seen with her back to camera – with many thinking that it was going to be a lookalike until she turned round and said, ‘Good evening Mr Bond’ It was THE jaw drop moment  and a further surprise would follow with  the duo leaving the palace, boarding a helicopter and parachuting their way to the opening ceremony venue with the 007 theme music in the background 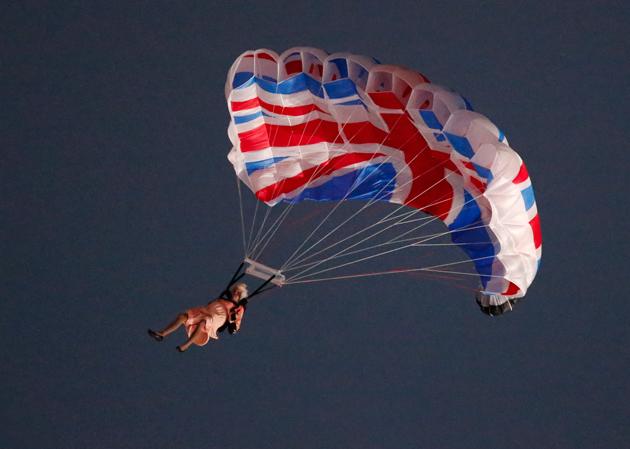 Everyone involved in the shoot had kept their lips sealed and it was only The Sun newspaper who got an inkling that something was going on when they saw a Bond lookalike go to the Palace but it was generally regarded as a joke by readers and in fairness the paper itself. – not even her family knew what had been going on.

The rest is history with the world open mouthed at the unlikely spectacle of the Queen skydiving from a helicopter into the opening ceremony making it the talking point for years afterwards.

London 2012 Olympics was generally regarded as one of the most successful ever and years later Boyle would be offered the directing gig for Craig’s final outing  but as was widely publicised HERE he left the production early on.

It’s not generally known that in a ceremony at Windsor Castle on April 4, 2013, Queen Elizabeth II received her own BAFTA from Kenneth Branagh admittedly not for that Bond moment but the honorary award recognized her outstanding patronage of the film and television industries.

Boyle too would be up for a gong but this time it was a knighthood. An avowed Republican Boyle refused the honour but really what could top directing the Queen and James Bond in a scene together?

Producer Kevin Loader chats about working with the Palace on the Queens’ 70th Jubilee documentary, ‘Elizabeth’.