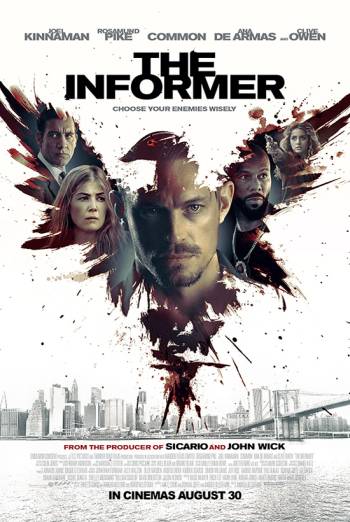 So we get a lot movie news tidbits sent to us notably from one informer the most recent being that Gemma Collins is in talks to recreate the famous pregnant Demi Moore magazine  for Vanity Fair. In preparation to play the role convincingly Gemma Collins has said she will lose 9 stone (‘You’re Fired!’ – Ed).  So it’s not always reliable but this weeks new release is far more persuasive. Pete Koslow (Joel Kinnaman) is an ex-con coerced into working undercover for FBI agent Wilcox (the ever reliable Rosamund Pike) in her efforts to nail a Polish drugs kingpin. It all goes spectacularly awry when an undercover cop ends up getting killed and Wilcox’ senior officer is a coolly ruthless Montgomery (Clive Owen) orders her to back away from the case leaving Koslow out to dry and banged up with a prison sentence.

Based on the novel co-written by Anders Rislund & Borge Hellstrom it’s been adapted for the screen by actor turned director Andrea Di Stefano making his directorial feature film debut. The Informer has each of the central characters in a dilemma with Koslow banged up for a shorter prison sentence on the condition that he continues to assist Wilcox in her investigation – one which she has spent years putting together only for it to fall to the wayside if she abandons him. The Polish drugs gang are uniformly dangerous although it seems that a condition of joining is a ponytail and an undercut with a look that feels like it was the barbers half day. For Koslow his [ostion in the prison grows ever more dangerous as it does for his wife the stunning Ana de Armas (‘Blade Runner 2049’) whose role here seems to be the fate of many attractive actresses namely the underwritten wife there solely to be in danger from the drug dealing gang whilst her husband is banged up in prison and out of the two main female roles it is hers that is the most formulaic. To make The Informer plot even more complicated is NYPD cop Grens played by Common in another cop role after The Hate U Give, who suspects that the death of his undercover cop colleague is not all that it seems and he starts turning  up the heat on the FBI and Clive Owen. So what follows is a set of characters all with their own quandary all of which have devastating consequences and Di Stefano keeps all the story strands moving along nicely but comes to a not wholly satisfying end that is a little inconclusive.