Roast potatoes. Who doesn’t like roast potatoes? Certainly not our vegan Deputy Editor having gone to the local restaurant for a Sunday dinner with our carnivorous Editor and complimented the kitchen on their roast potatoes. Asking what their secret was they replied that it was achieved by using goose fat.  It’s this sort of lack of understanding that it as the centre of Le Mans 66 (‘Ford vs Ferrari’ in the US). Based on the true story of Carroll Shelby (Matt Damon) a racing driver whose career is cut short and turned his hand to car design (the Shelby Mustang is surely one of the most beautiful cars ever made). At the time he was involved with the Ford Motor company which was presided over by Henry Ford II son of the great Henry Ford and were regularly being trounced at a number of prestige races especially Le Mans where Ferrari ruled the roost. It was a source of deep humiliation for Henry Ford II that his company,  as successful  as it was, could not beat Enzo Ferrari an arrogant, shades wearing, Italian who looked more like a Mafia Don than anything else and sends back a verbally abusive message for Ford. 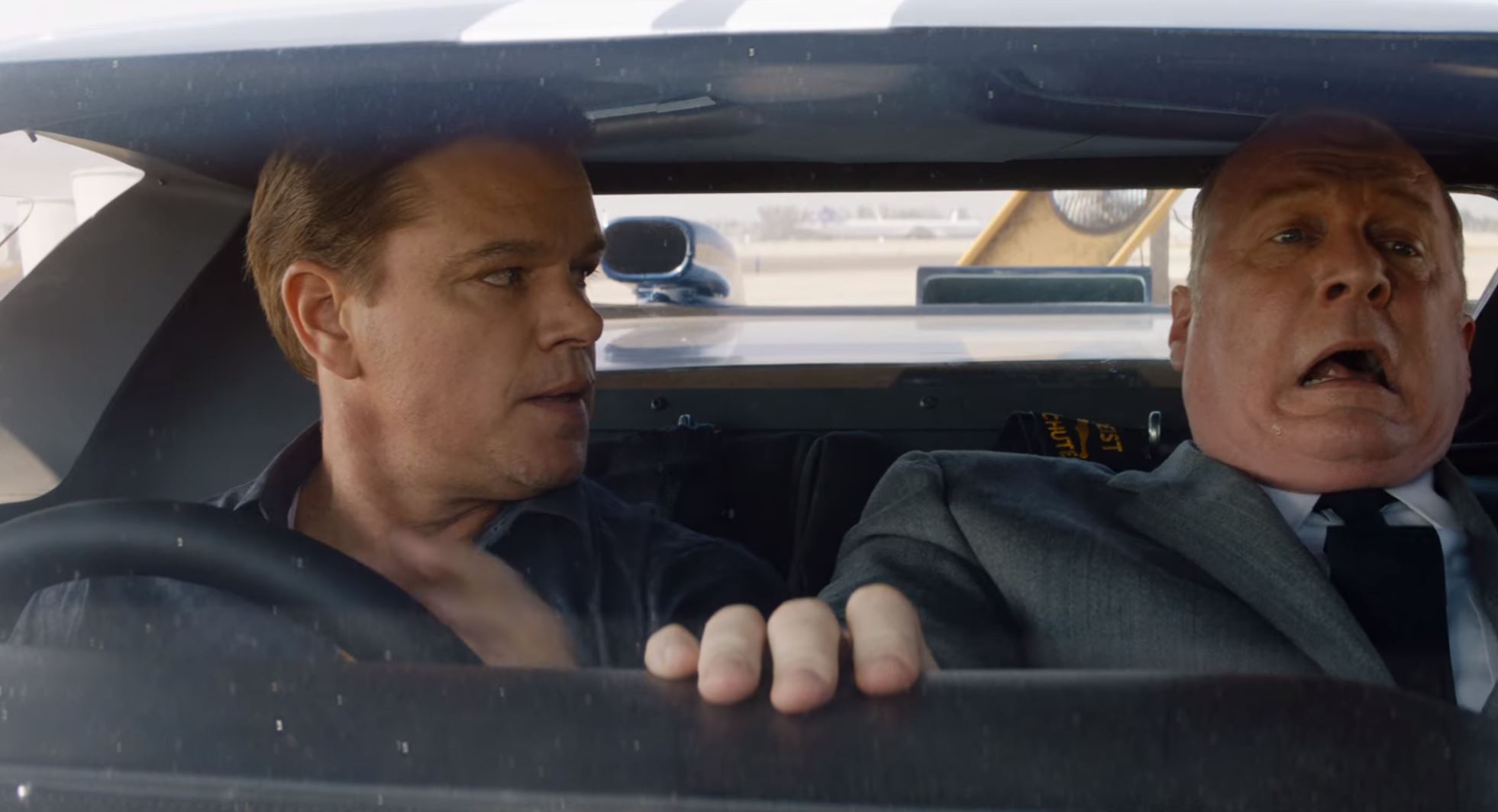 With sales falling and Ford Marketing department led by Lee Iaocca (Jon Bernthal) on the verge of being fired they hit on the idea of hiring Shelby to design a car for the next Le Mans. Unfortunately they only have 90 days to do so. ‘Cometh the moment , Cometh the man’ and in this instance Shelby calls on Ken Miles (Christian Bale) an English mechanic with his own garage and alienating his customers with prestige cars  telling them that their not suited to the car. It’s hardly a surprise that his garage is foreclosed by the IRS and with a family to support he finds himself working as a grease monkey for other garages.  Played by Christian Bale this is a radically different role from his last film barely recognizable as Dick Cheney in ‘Vice‘ and Oscar nominated had bloated up for the role. Well that massive weight gain is now long gone and here he’s rakishly thin with cheek bones so sharp they only add to the aerodynamics when he drives. And boy can he drive……having fought in WWII where he successfully raced and combined with his insightful knowledge in engineering made him an ideal hiring for Shelby and together they were an unstoppable force as they push the limits of engineering and physics to make a car that Miles can race and win Le Mans all because of a petty vendetta.

Now we’d be the first to admit that the appeal of motor racing might be unfathomable to many. The thought of high performance cars speeding endlessly round and round a track is comparable to watching traffic on the M25 albeit with less accidents and better pit stop toilets. But this is the race movie we’ve been waiting for. The cars bullet bombing around the track is as exciting as we’ve ever seen on screen and its balanced by Damon and Bale’s bromance and their battle with the execs at the Ford company. It’s that lack of understanding  we mentioned earlier that is at the film’s core because whilst Henry Ford II (Tracey Letts) just wants the honour of winning for his company it’s his No 2 Leo Beebe (Josh Lucas) who, having fallen out with Miles wants him humiliated, insisting on procedure and restrictions that effectively put the brakes on any chance of winning and it’s this that gives the film an almost too incredible to believe ending (although it did happen) . Le Mans 66 becomes a corporate v personal battle with Miles the maverick never really getting the stamp of approval as the image of Ford racing. In that respect he could even be seen as a veiled dig at the film studios vs the creatives in film. Bale as ever is perfect in the role despite an accent that initially seems like a Dick Van Dyke in Mary Poppins tribute act and its reassuring to hear so many British throwaway words scattered throughout the script (‘tea and a cheese cob ‘ being our favourite) and at heart he’s a family man committed to everything he loves which is his son, wife and cars and not necessarily in that order. Damon continues his string of wisely picked roles in good films with a supporting cast who are equally as good.  With thrillingly shot races and great drama off the track Le Mans 66 is another great end of year film.