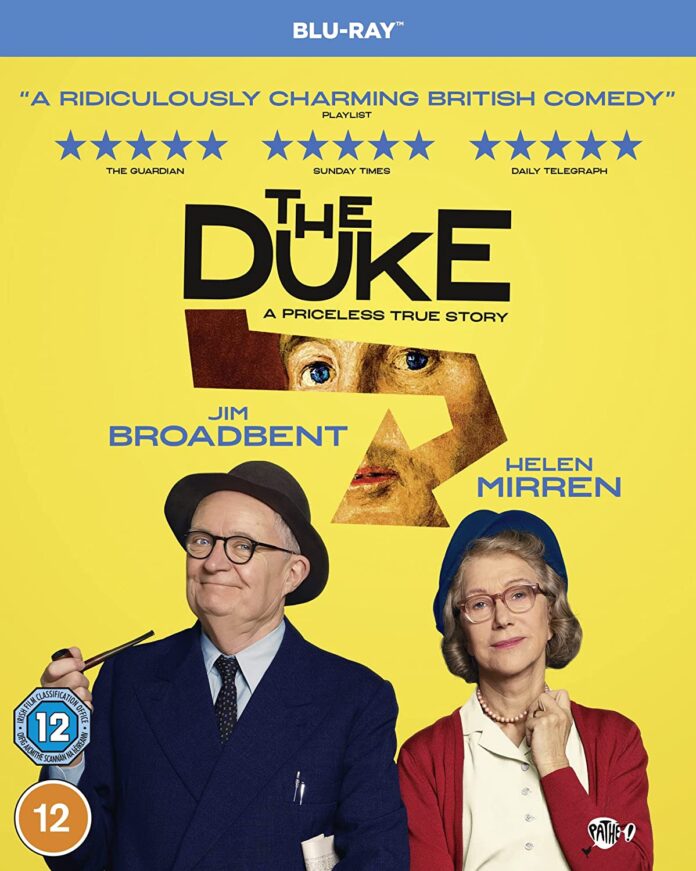 There’s an array of leading British acting talent whose presence in a film always elevate it and Jim Broadbent and Helen Mirren certainly come under that category. Both are laden with awards – Broadbent with an Oscar and two BAFTA’s and Helen Mirren also with an Oscar and 4 BAFTA’s plus a fellowship and let’s not forget that she was also made a Dame too. So its dream casting to have them together as the leads in director Roger Michell’s ‘The Duke’ and had its world premiere at the Venice Film Festival in 2020 where it received critical acclaim but The Duke blu-ray now arrives on 13th June 2022

THE DUKE is a funny and moving true story that celebrates a man who was determined to change the world and save his marriage. In 1961, Kempton Bunton (Broadbent), a 60-year-old taxi driver, stole Goya’s portrait of the Duke of Wellington from the National Gallery. It was the first and only theft in the Gallery’s history. Kempton sent ransom notes promising to return the painting if the government invested more in care for the elderly. What happened next is the stuff of legend…(read our review HERE).

Like many films its release was hampered by the worldwide pandemic shutting down the world’s cinema’s before eventually seeing its UK release in February 2022 where it did good business earning almost $14m worldwide.  Impressive for a film which at its heart has something of the classic Ealing comedy about it and even throws in a James bond reference using a scene form Dr No that features the painting in Dr No’s lair – albeit it was an imitation made by legendary production designer Ken Adam. The Duke is hugely enjoyable and a wholly comforting watch set in simpler times that’s long gone now where police were focussed on crime rather than today’s politicization of police requiring officers time is now wasted by people reporting the heinous crime of someone calling them, usually rightly, an idiot on facebook

It’s easy to warm to both leads as the married working class couple with her exasperated at his ideals that often land him in trouble which the theft of the painting certainly does here and The Duke is very much Broadbent’s film ably supported by Mirren.

The Duke blu-ray has only a few special features including a ‘making of’ EPK which is only a few minutes long. Better is the featurette  with Kempton Bunton’s grandson who recalls the true life story and who had bought it to the attention of the film’s producer.  There’s also a Q & A zoom interview with both lead actors and producer Nicky Bentham which offers up several interesting glimpses into the making of the film. It’s a decent enough interview made at a time when all junket interviews were completed via zoom (look at the AnyGoodFilm youtube channel HERE to see just how prevalent it is/was) but there are moments in the conversation when shots of the interviewer Anna Smith and producer Nicky Bentham suddenly switch from the usual camera facing shot to a 3/4/ profile shot where another camera was clearly present during the interview. But that is a minor point when what is  most obviously missing is director Roger Michell who tragically died in September 2021 before the film was released. A gifted and sensitive director this was his last feature film  – he had just completed his very last production the documentary ‘Elizabeth a Portrait in Pieces and died on his very last day of post-production (producer Kevin Loader talks about that last day HERE). The Duke stands as a testament to a director who had an in innate understanding of this kind of film which ultimately is  small drama with a very big heart.

Find out how they got The Duke on screen HERE