With Extraction becoming Netflix most watched film (read our review HERE) it is no surprise that a sequel has been greenlit. Until then we’ve had a look behind the scenes at the making of Extraction…..

Joe Russo adapted Extraction from a graphic novel titled ‘Ciudad’ that he had written with Ande Parks about a decade ago. He fondly recalls mining his childhood love of the action-thriller genre as he was working on the script. “We’d stay up late with my father on weekends and watch all those quintessential ‘70s action thrillers, so I have a strong emotional connection to the genre, but with this film, I wanted to deconstruct it: deconstruct the notions of what it means to be a hero and ask hard questions about the traditional stereotypes that play out in action movies. So by the end of the film you’re left with a lot of ideas that have been turned on their heads.” 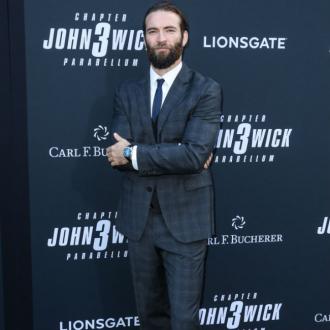 In searching for a director, the Russo’s zeroed in on Sam Hargrave, one of the most accomplished stunt coordinators in Hollywood having worked on projects from Atomic Blonde to The Hunger Games. They’d long-admired Hargrave’s ability to translate character through action, and were particularly impressed with his work on the Marvel films, where he served as Chris Evans’s stunt double in earlier films and stunt coordinator for ‘Avengers: Infinity War’ and ‘Endgame’. “The best action films are those where the action is used to illuminate character and their choices or motivations. The emotional life of the character is told through action. Sam does that brilliantly,” says Joe Russo. Adding to this sentiment, Anthony Russo says: “Sam performs, choreographs and shoots virtuosic action cinema, but what makes his work truly resonate, is that he does so with the eye and hand of an artist. This film is perfectly aligned with him in that it is a hardcore action movie with a soul. He delivers the thrills of an epic action movie, while also delivering the heart and humanity found in the most compelling dramas.” For Hargrave, who had set his sights on directing for a while but was waiting for the right moment to make the transition, the opportunity seemed perfectly timed. Empowered by the success that fellow stunt coordinators-turned-directors Chad Stahelski (John Wick) and David Leitch (Atomic Blonde) enjoyed with their films, Hargrave took the leap. “It was a goal of mine to direct for many years, so to work my way up the ranks through stunts, action directing, second unit and now directing my own film — with the Russos attached no less — was a dream come true,” he says.

Production shot in and around Ahmedabad, India for 20 days and the remainder of the film’s 58-day schedule in Thailand. Ahmedabad, is the sixth largest city in India, home to a growing entrepreneurial tech sector but also to the slums and rundown tenements the production needed as a backdrop. Over eleven different locations were found around the city including tenements, underpasses, roads suitable for vehicle stunts, rooftops and the huge modern mansion where we first meet Ovi the kidnapped schoolboy and understand his sensitivity and his isolated loneliness. 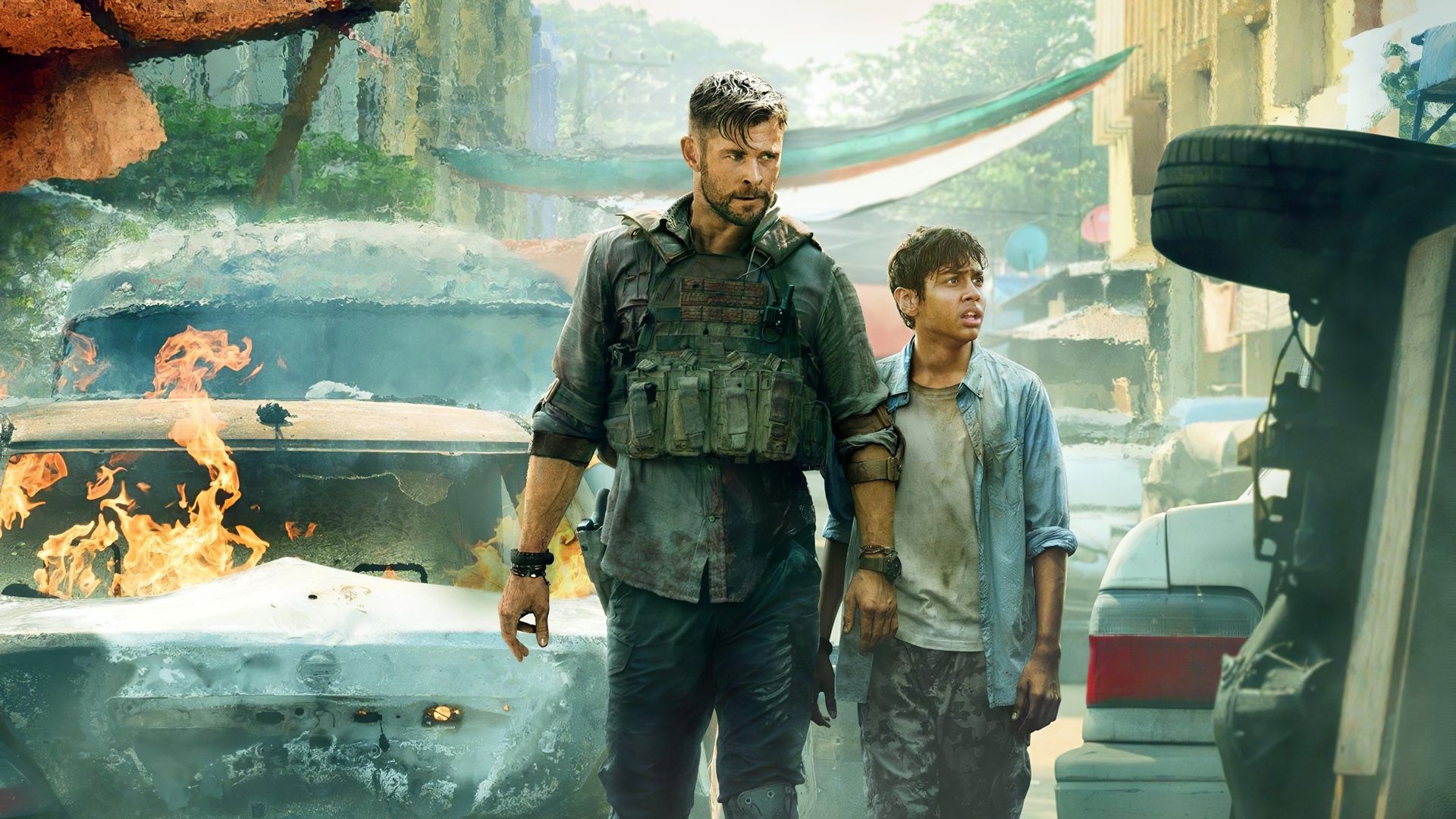 With locations set up and ready, filming began with one of the most challenging set pieces in the film: An 11-minute-long sequence designed to look like one seamless shot that would include several car chases, pile ups, hand-to-hand combat, running through tenements, leaping and falling off roofs – all filmed on location in a densely populated community who were excited to welcome a Hollywood film production. “We really hit the ground running,” recalls Hemsworth, who had just wrapped work on another film and packed what would normally take about 6-8 weeks of training into 2-3 intense weeks. “It was a shock to the system for all of us, but it set the pace for the rest of the movie and it didn’t stop. This is the most intense film — physically and emotionally — that I’ve ever done but it is also the most rewarding because it felt like we were achieving something special. Even though I was exhausted at the end of every day, there was a real sense of accomplishment.”

As a stunt coordinator, Hargrave’s skill set imbued the sequence with a unique intimacy that situates the viewer as close to the action as possible, while also advancing a key narrative point that sees Rake and Ovi finally starting to trust one another — something only a director with a background like his could’ve pulled off. In fact, Hargrave placed himself right in the middle of the action. “I was strapped onto the hood of a Polaris Ranger 1000 with a camera in my hand for the oner where we’re chasing our heroes in a Mercedes. The shot goes for about 30-40 seconds, then I leap off — they unclip me — and I lunge into the back seat of the car while it’s still moving,” he explains. “Sam was not only demonstrating stunts for us, writing the sequences, and directing them,” recalls Hemsworth, “but there he is strapped in front of a bonnet as close to the action as you could possibly get. At one point his car crashed straight into the side of my car. We called cut and looked down and his leg was jammed down in between the two cars, but in some miraculous way, his foot was in that little gap between the wheel and the chassis. A couple of inches to the left or right and it could have been pretty gnarly.” 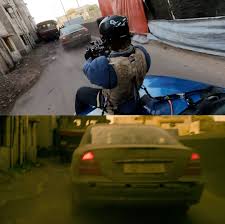 The goal ultimately was to capture the imagination of a sophisticated film audience used to big action sequences, while pushing the envelope as much as possible. “We wanted to take chances on some new things and put it together in a way people might not have seen before. We planned to present things that were familiar — car chases, stunts, crashes — but do it in a way that gets people right into the action,” says Hargrave. “I tried to build a lot of variation, in terms of architecture and environment, into the chase sequence,” says Phil Ivey. “We start off in the woods, we go through an abandoned mill, through various streets, moving through the busier sides of buildings, and a big housing complex. It’s been a really involved process, working with Sam to find all the locations and making sense of how they were all going to fit together. It was hugely important to get it right because this sequence really sets up the world of Dhaka.”

Stunt coordinator Daniel Stevens had been rehearsing the scene for weeks. “Because we use one camera angle for the whole thing everything has to be perfect,” he says. “Normally if you’re doing a car chase or a fight, you’ll be cutting to different angles, so if you don’t get something perfect from one angle you can cut to the other, or cut to an actor’s reaction. But because it’s all in one continuous take everything has to be perfect in one go. It’s tricky but it also makes it more exciting for the audience because you feel like you’re in it, you don’t feel like you’re cheated.” 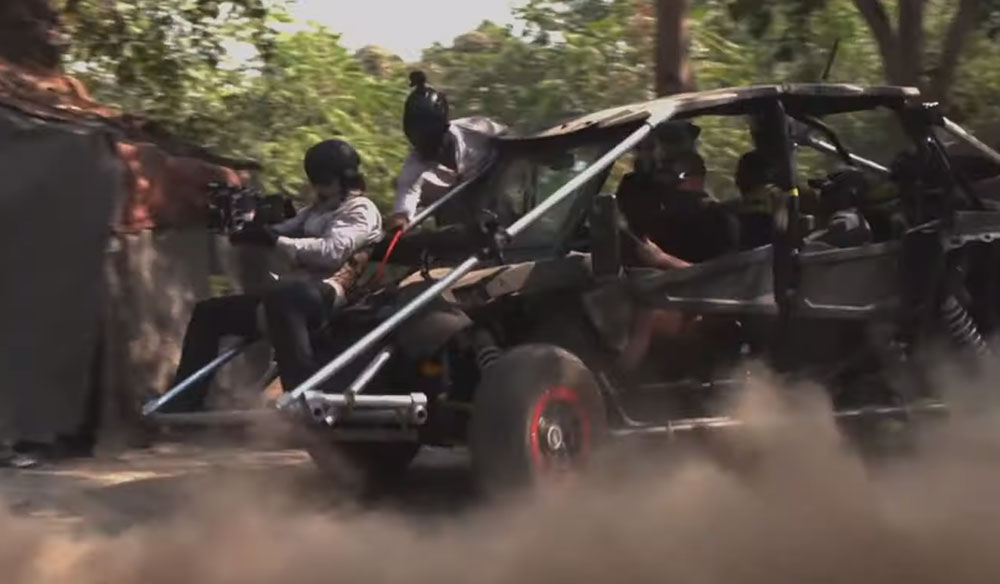 Toward the end of the scene, further down the road beyond an overpass, the special effects team led by Brian Cox had been prepping for the final explosion. “There was no option for it not to go right. This was a one take wonder.” The end result is a thrilling, heart-pounding chase through the streets of Dhaka. “Aesthetically, it’s beyond unique,” says Hemsworth. “Each of the locations is so full of colour and movement, with this energetic sort of chaos that Sam was able to somehow orchestrate.

After 25 days of near non-stop action, filming moved to Thailand to capture both crucial, quieter scenes between Rake and Ovi in addition to the film’s climactic sequence that culminates in an epic gun battle over a bridge. They were incredibly kind and supportive allowing us to create havoc in their streets.”

Meanwhile, the locations department were still locking negotiations for a bridge which would provide the location for the entire third act of the film, as the protagonists come together for an all-out battle as Asif musters the full range of his fire power and the military closes in to prevent Rake and Ovi leaving the city. They needed a bridge which production could shut down for four weeks. “We scouted 20 bridges India and 72 bridges across Thailand,” says location manager, Mary Barltrop, “Some bridges were too short, some too long, too wide, too narrow and then we found one that was perfect.” They came across the Lat Bua Khao Bridge in the Thai province of Ratchaburi, about an hour outside Bangkok. “Most filmmakers would have used green screen,” explains production designer, Phil Ivey, “as bridges are notoriously difficult to film on simply in terms of moving equipment in and out, for example. But in keeping with the authenticity of the film and the story we were telling, we needed the real deal.” Dhaka sits on the northern bank of the Buriganga River and is surrounded by three other rivers that make the city a citadel surrounded by water. There are only four bridges that lead out of the city. And that gave the protagonists an added jeopardy: the only way to rescue the boy was to get him over the bridge and, with the entire police force and army at his disposal, Asif Amir could blockade them all. Once the bridge was secured, the art department began creating the blockade: 132 vehicles were piled up on the bridge including 14 pickups and SUVs, 40 sedans (including police cars), 19 light trucks and vans, 12 full-sized trucks (including an armoured military vehicle), 5 buses, 22 motorbikes, 18 tuk-tuks and 7 bicycle rickshaws. There were other challenges. “The third act was a 20 page, 3-week sequence that we had to shoot in 11 days,” Hargrave recalls. “The only way we could do it was with two units shooting simultaneously on either end of the bridge. So we strategically placed vehicles and worked schedules to block each unit from the other. But, while we’re trying to create a shootout to end all shootouts, we also have all our protagonists come together for the first time: we have Saju as the decoy drawing fire, Ovi moving alongside him and hiding under vehicles, we have Rake fulfilling his promise to Ovi, and Nik at the other side willing them to reach her while firing off RPGs to thwart the forces intent on stopping them reaching freedom.” “The stunts are relentless,” he continues, “We have 56 stunt players on the bridge including 40 local Thai players and others from the US, Canada, Australia — it’s an international team who are working really well together. On top of that we have hundreds of extras.

Quite how the Russo’s will top this remains to be seen but they are already looking to streaming for future films with the Tom Holland actioner , ‘Cherry’ awaiting release if the cinemas remain closed for the foreseeable future.