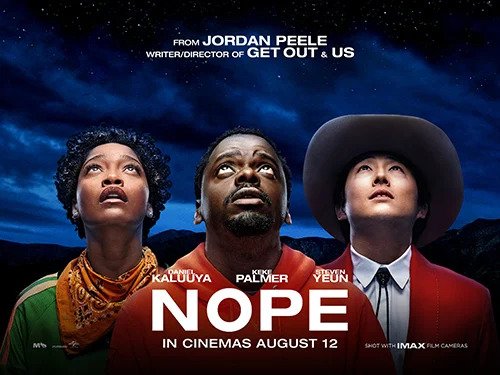 Although Nope is the answer every time director Uwe Boll asks the studio to finance his next film it’s also the latest from writer – director Jordan Peele and trailer that is typically opaque but alludes to being a possible UFO mystery. The opening of the film certainly doesn’t lead that way with an onscreen biblical caption reading, ‘I will cast abominable filth at you’ it’s a caption that should run at the start of every reality show featuring Gemma Collins but here it is an ominous sign as to what may follow further reinforced by a shot of an empty TV studio where something catastrophic has clearly happened. It’s a great hook to pull you in and is one of a whole heap of details that is crammed into the films two hour and fifteen minute running time.

Regular collaborator Daniel Kaluuya is OJ Haywood an animal wrangler of horses for film & TV productions having taken over the business after the bizarre circumstances of his father’s death. Kaluuya is a great actor with an Oscar rightly to his name and the film uses his trademark stare to great effect but gives him little else to do and its him who has uses the title word as a term of disbelief when larger than life events happen before him. OJ and his sister Emerald (Keke Palmer), who is the live wire in contrast to her brother’s flat battery person, and helps run the business where they start to notice that all is not right in the sky’s over their ranch. To this end they install cameras with the help of a tech savvy employee Angel (Brandon Perea) from the store where they but the CCTV system. They also persuade cinematographer Holst (Michael Wincott), with a voice so deep that it could trigger earth tremors, to try and capture footage of whatever it is in the skies.

Alongside this is Ricky ‘Jupe’ Park (Steven Yeun) who runs a lack lustre wild west theme park but was a former child TV star who fell from grace after the bloody carnage caused when a chimp goes ape shit crazy with the sort of scenes not seen since Gemma Collins was told the all you can eat buffet was closing.  But he too is aware of something in the skies and runs a show featuring what’s up there.

It’s all intriguing stuff and Peele expertly conjures up mystery and some very effective set pieces notably an early one in  a stable that sends a cold shiver and is akin to the best moments of M Night Shyamalan’s early films. Like all of Peele’s films there’s a wealth of detail that prompts multiple viewings but here might not reward as hoped for but is open to interpretation. And that’s part of the problem with this third film is that there’s too much detail that doesn’t always reach an answer. As good as Kaluuya and Palmer are its actually Yeoh’s story that compels most and audiences might want to know more of his TV show incident backstory. Meticulously framed and slowly revealed this is now part of Peele’s stock in trade and works well but with so much secrecy and expectation from the marketing campaign the audiences answer might be the title.  But Nope is that rare thing – a big summer blockbuster that is an original film not a sequel and in that respect he vies with Christopher Nolan with anticipation for what are now event movies.