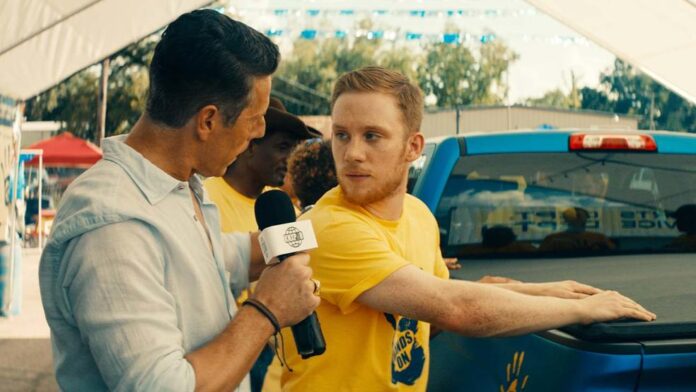 As reality shows have become a staple of TV schedules many have ended badly. The CCTV at an Attention Deficit Disorder Convention seems to have inspired the idea for Celebrity Big Brother and the Chinese version of Deal or No Deal ended in international disaster when the box opening contestants found the show relocated as a one off special to a Wuhan pathogen laboratory with the contents of the boxes accidently replaced by….well we’re still dealing with the clear up. But one of the most inane was Touch the Truck a short lived Channel 5 series lasting just five episodes where 20 contestants had to keep their hand on a spangly new truck and the last man standing would win it.

One of these Days features that exact premise except here the film is ‘inspired by true events’ as this was an annual publicity stunt run by a Texas car dealer with the contestants selected by lucky draw. Each of them have their own reasons for wanting to win and all are equally determined. The cast is led by Joe Cole as Kyle, who flips burgers at his girlfriend’s cousin’s fast food store. With a young baby to support and living in a rural Texas without public transport he relies on borrowing cars and feels that he’s earned the truck. He’s not the only one and his fellow contestants include a man who refuses to take a bathroom break, a Bible reading spinster, an ipad listener tapping the truck along to the tunes and a number of ultra-competitive males each determined to psych out the others in order to win. As an ensemble piece all blue collar American life is here all supervised by chirpy company R lady Joan (Carrie Preston) using the event to blot out her own personal issues.

Writer- director Bastian Gunther takes a coolly European look at small town America building up to a truly shocking moment. This should be the climactic moment of the film but instead the film rewinds to the run up to the contest for no beneficial reason making the film unnecessarily overlong at two hours. One of these Days would have benefitted greatly from staying with the contestants around the truck in what admittedly would have been more stagey but as a character study and an examination of middle America would have worked far better.

Watch the One of These Days trailer HERE