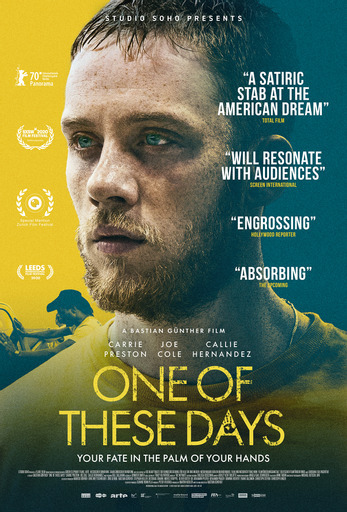 Few us us can remember the Channel 5 series Touch the Truck and frankly rightly so consisting as it did of twenty people who had to keep their hands on a truck without letting go with the last man standing winning the truck. Yes that really was all they had to do and yet they wrung a five episode series out of it with the winner having spent 81 hours completing the task and presumably having the worst soiled trousers since Mad Mick, the resident drunk on Shepherds Bush Green mistook laxatives for MDMA. Well now we have the One of these Days trailer, a film based on a true story of such a show.

In a small southern town in the US, twenty volunteers compete to win a brand-new pick-up truck, in the annual ‘Hands On’ contest, a prize that might finally tip the scales of life in their favour. Each contestant has their own reasons for joining the contest, and as the blisteringly hot days and long nights add up, their humanity is laid bare. Car dealership employee Joan (Carrie Preston) provides fervent enthusiasm to the contestants, including the young family man Kyle (Joe Cole, “A Prayer Before Dawn”), who wants to win the car at all costs, but who will hold on and win – and at what cost?

Written and directed by Bastian Günther (“Houston”, “Autopilots”), ONE OF THESE DAYS has received critical acclaim during its programming at numerous film festivals around the world, including Berlinale, Zurich Film Festival, and Nashville Film Festival. Director Bastian Günther’s compelling, psychologically charged images ultimately draws a timeless and topical picture of poverty, wealth, and desperation. Based on true events, ONE OF THESE DAYS portrays a society in which the obsession with economic gain leads to tragedy. Anchored by terrific central performances from Joe Cole and Carrie Preston, and a great supporting cast.

Here’s the One of these Days trailer…….