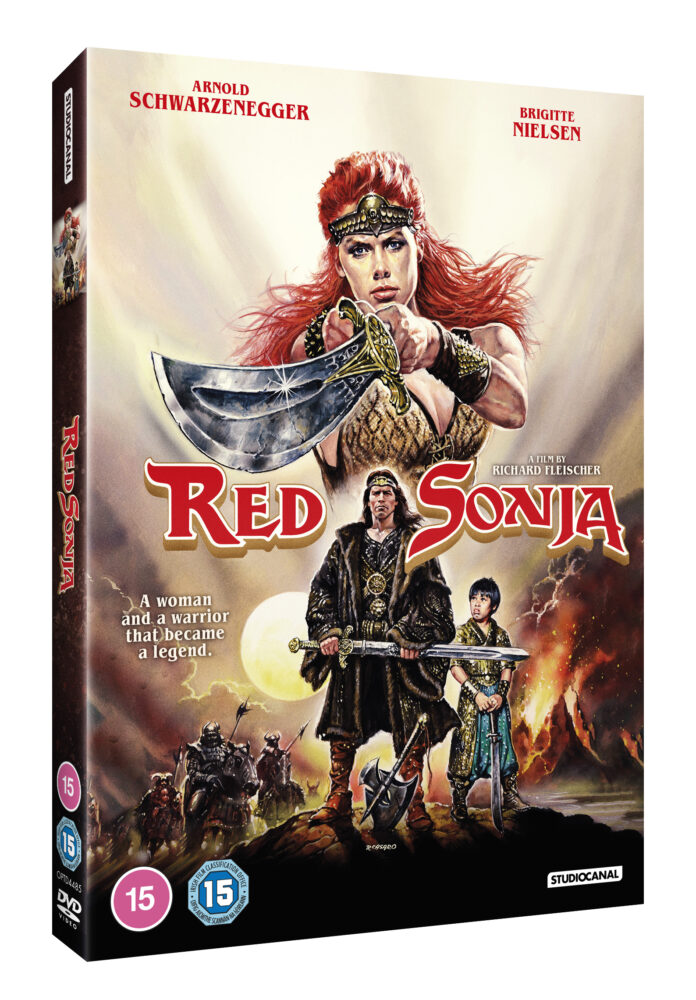 Starring a feisty Danish model in her first film, co-starring a vowel mangling Austrian body builder, directed by an experienced Hollywood director, photographed by an Italian DoP who spoke no English and shot in Italy Red Sonja was a typically mixed production from legendary producer Dino De Laurentiis. Brigitte Nielsen was a statuesque Danish model who had never acted before but who Dino had cast in the lead role of his $12m budgeted sword and sandals epic and would co-star emerging Hollywood star Arnold Schwarzenegger. And yet despite the film’s title he was a clever bit of casting as his initial 10 days of filming turned into weeks as the film makers shot more and more scenes with him ratcheting up his role substantially. Having made a number of films he was coming off the back of the success of The Terminator but also had appeared in two Conan films in a role that his immense award winning physique was ideally suited to and his role as Kalidor in Red Sonja was a essentially only a variation on that.

Red Sonja was shot in a non-sound proofed studio in Italy with exterior locations in the beautiful Abruzzo all helmed by the late Richard Fleischer a highly regarded if something of a journeyman director whose back catalogue was an eclectic mix of genres that included 20,0000 Leagues under the Sea, Fantastic Voyage, The Boston Strangler, Soylent Green and 1980 version of The Jazz Singer. His 1984 film Conan the Destroyer made him ideal for Red Sonja having already directed Schwarzenegger. Dino had modelled Nielsen into what he wanted which primarily involved getting her to dye her naturally blonde hair red which did nothing to enhance her looks and she underwent much training in sword fighting with revered stunt co-ordinator Vic Armstrong . The two stars were supported by a number of actors who were easily recognised if not their names including Ronald Lacey, Pat Roach and Paul L Smith for the film whose script had been co-written by George MacDonald Fraser whose Flashheart books were cult favourites.

With its story of Red Sonja setting out to avenge her family’s murder and rid her kingdom from the tyrannical rule of Queen Gedren it was familiar fare for the genre bought to life with its mix of model work, matte paintings, practical effects and impressive production design proving enjoyable in a pre CGI era. Yet despite Schwarzenegger’s presence it didn’t set the box office alight earning almost $7m.

This release on blu-ray is a decent transfer and has a number of bonus features that, like the film, is far more interested in Arnie than it is Brigitte with an archive featurette on his rise to Hollywood fame and a short subtitled ‘making of’ with the Italian assistant director. Best though is an unusual Italian documentary on Renato Casaro  – described as the last movie painter. Whilst not a household name is work is easily recognised with its hyper real photographic style of the actors and his work is as iconic as that of Drew Stuzan. Casaro painted many stunning posters for films that dripped with machismo and apart from Red Sonja included several for Dario Argento as well as the Rambo franchise, Cliffhanger and several Schwarzenegger films including Total Recall, Terminator2 and True Lies. Though director Richard Fleischer passed away in 2006 what the disc really misses is a commentary from Nielsen herself. She’s always been pretty forthright and it was rumoured that she and Arnie had a relationship on the film. Now married five times (including once famously to Stallone) she has never been shy about expressing her views and a refreshingly honest yak track from her would have made this an essential buy for what is a hokey but enjoyable Saturday afternoon film

RED SONJA IS OUT ON BLU-RAY NOW