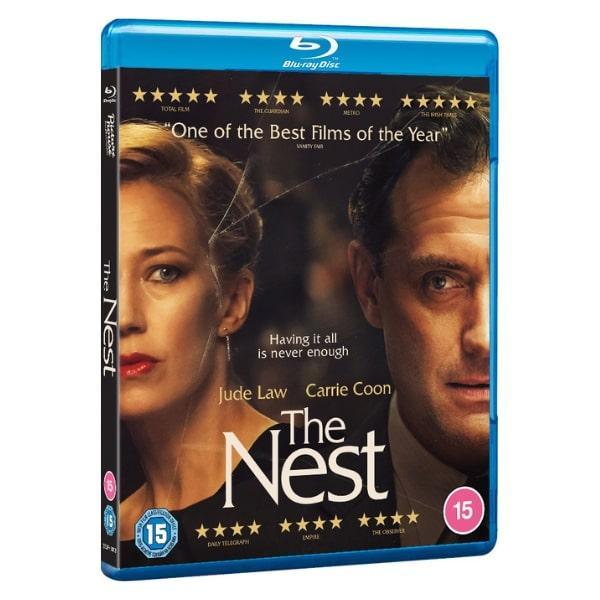 Though he remains annoying youthful Jude Law is 50 years old this year (2022) and has been acting since 1988 with two Oscar nominations to his name.  It should be three because The Nest has him giving a superb performance as Rory O’Hara working the financial markets in New York but now wanting to relocate back to England feeling that his career has run its course in the US. He’s something of a fantasist and his wife Allison (Carrie Coon – Ghostbusters Afterlife)is strong willed and keeps him grounded but reluctantly goes along with his idea and they relocate to a huge country pile, The Nest of the title, on the edge of London with their two children. It’s all part of his materialistic acquisitive lifestyle and it’s a thin veneer that covers his already deteriorating  and fractious marriage as well as a disconnect from his children believing that because he feeds, house and gives his children everything that that is enough

Written and directed by Sean Durkin this is a superb analysis of a marriage already in freefall and the fallout on their children with their eldest daughter Sam ever more antagonistic towards her mother  whilst their young son Ben is upset and afraid of what’s happening to his family. For the children it comes to a head with a party that Sam has local randoms turning up with drink and drugs and culminating in her vomiting up the effects of drugs whilst New Order ironically sing the lyric,  ‘I feel fine and I feel good’ in the background party music. As the marriage implodes so does his career with Rory big on ideas but failing short on attention to detail and Allison’s career running a horse stable soon sours with the death of a favourite horse and all four family members individually spiral into an abyss. This all sounds pretty grim but it’s headed up by two superb central performances that were unjustly overlooked at awards time but in fairness the film suffered from its release being stalled during the worldwide lockdown which is a shame because this is well directed with performances to match. There are several compelling scenes notably a business dinner that the pair attend where Allison contemptuously snorts at her husbands derisory attempts to impress potential investors before she leaves and drunkenly parties the night away on her own. It is all utterly engrossing with an ending that will prompt debate on the couples future.

Out on blu-ray the disc for The Nest is somewhat vanilla with only a trailer a cursory featurette that is only a few minutes long and the film would have benefitted from a directors commentary. Nonetheless The Nest is a film that’s deserves to be seen.