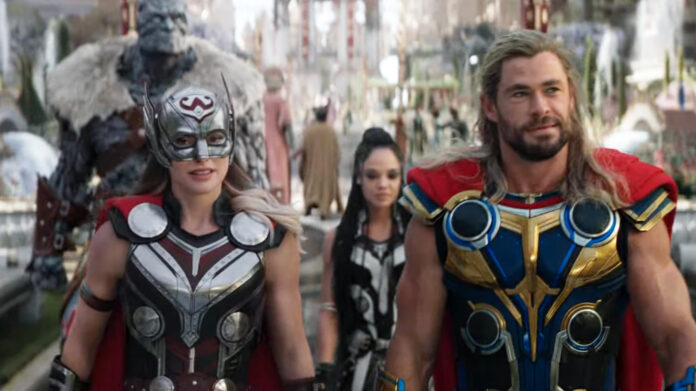 There’s little doubt that it was a brave move for Marvel to have hired Taika Waititi to helm one of their blockbuster superhero films with Thor Ragnarok (reviewed HERE) which paid off handsomely earning almost twice that of its predecessors and becoming one of the best films in the canon. And now with an Oscar to his name after Jojo Rabbit he was a shoo-in to direct Thor Four or Thor Love and Thunder as its actually titled.

Since Avengers Endgame we’ve had the end of Marvel’s phase three and this latest film has to tidy up several plot lines so we have what looks like a contractually obliged appearance by the Guardians of the Galaxy cast and Thor’s weight gain has to be rectified with a montage sequence before we settle down to the real business, that of the appearance Gorr (an almost unrecognisable Christian Bale) a slayer of gods after having worshipped one only to find himself contemptuously dealt with by the god that he worshipped after the death of his own daughter. His god laughs at him telling him the that there is only death and nothing after. It’s a subversive dig at religion that’s sneaked past the studio in the same way that Ragnarok’s subtext was colonisation.

Pale, wasted and wearing a blanket Gorr looks like Gandhi’s zombified stepbrother who goes on a vengeful rampage to butcher all other gods with his necro-sword and abducts a large group of children in New Asgard. It’s Thor to the rescue assisted by Valkyrie (Tessa Thompson) Korg (Taiki Waititi) and bought back into the mix is Jane Foster (Natalie Portman) who, for the first time, has a far more substantial role which this time is not just the love interest but a warrior yet she is also suffering from a terminal illness put on hold by the shattered hammer Mjolnir.  Typical of Waititi is that he has brilliantly thrown in a side joke about rivalry between the hammer and Thor’s new weapon Stormbreaker, an axe that edges into frame vying for Thor’s attention whenever he feels sidelined by his affection for his old weapon. Hemsworth as ever is at home in the role which he has made his own playing Thor as part hero, part himbo and all fun.

Waititi is one of those rare directors who has not had his style, and especially his humour, subsumed by the corporate needs of a studio blockbuster and there are plenty of his quirky playful touches beside the hammer / axe rivalry that includes a pair of giant shrieking goats, Korg’s quips and exuberant use of primary colours with a rock soundtrack that plunders Guns n Roses seminal Appetite for Destruction album. It’s immensely enjoyably with the expected unexpected cameos notably by one A –list actor with the most bizarre accent he’s attempted yet but it’s something that just adds to the whole fun of the enterprise under Waititi’s hand. There is something here which appeals to perhaps a broader base than just the diehard fans and the director has made this production very much a family affair with his and Portman and Hemsworth’s own children in small roles and a small army of kids central to an action set piece and clearly have a whale of a time as will audiences.

….and yes there’s the usual mid credit serious scene with the introduction of a new character that promises great things for a fifth film as well as a very end credit played solely for laugh scene too.

Watch Taika Waititi at the UK premiere introducing surprise guests and answering some even more surprising questions from the audience…….watch it HERE