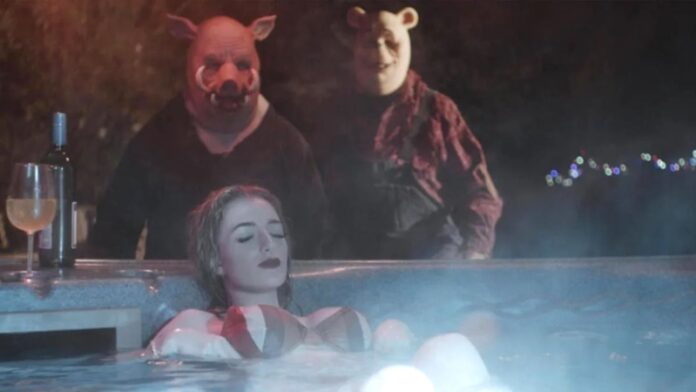 Starring Craig David Dowsett as Winnie and Chris Cordell as his best friend Piglet the pair go on a murderous rampage after Christopher Robin (Nikolai Leon) abandons them for college and pair go feral searching out human victims near their Hundred Acre Woods home. What we see in the Winnie the Pooh Blood and Honey trailer showcases is the pair revelling in blood drenched carnage.

Shot in just 10 days in Ashdown Forest (the original inspiration for Hundred Acre Woods) the film is helmed by Rhys Waterfield.

So the obvious question here is how has Disney not been able to put an immediate stop to the besmirching of the beloved bear and it all boils down to the rights to Winnie the Pooh  entered the public domain this year. But the film makers were able to avoid any Disney copyright issues ( the studio owns the visual interpretation copyright of the character)  by swapping Winnie’s red shirt for lumberjack gear and omitting certain characters such as Tigger who is still under copyright.

Director Rhys Waterfield said, “When you try and do a film like this, and it’s a really wacky concept, it’s very easy to go down a route where nothing is scary and it’s just really ridiculous and really, like, stupid and we wanted to go between the two.”

There’s a wind blowing through Hundred Acre Woods  – it’s author A.A. Milne spinning in his grave. We would love to know what you think of this so please do let us know in the comments section below

Here’s the Winnie the Pooh Blood and Honey trailer ……