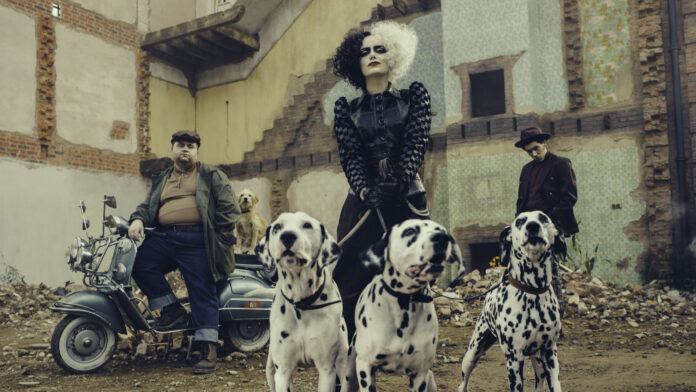 So whilst Disney had huge success with their live action versions of their animated films it’s only comparatively recently we’ve had spin off films with their impressive array of villains. Maleficent had Angelina Jolie ideally cast as the Sleeping Beauty villain and now it’s the turn of Cruella De’Vil the vampish villain from 101 Dalmations. This being an origin story we find that Cruella is actually Stella, with a bent for fashions and daughter to a single mum. Stella is soon orphaned and the teenager begins to lead an almost Dickensian lifestyle having fallen in with Horace (Paul Walter Hauser) and Jasper (Joel Fry) channelling Bob Hoskins and David Walliams respectively as they thieve their way round 1970’s London. 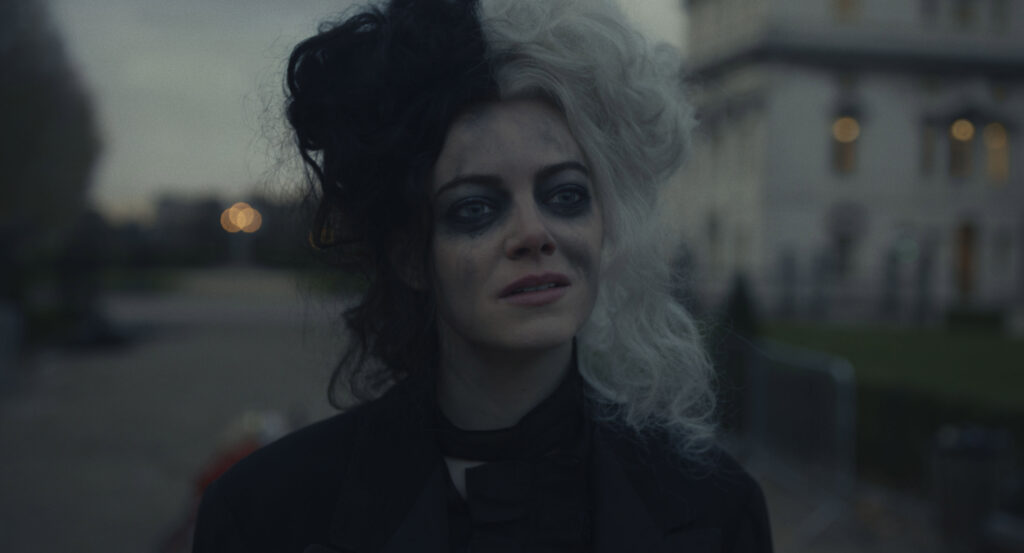 But her love of fashion leads her to London’s Liberty store, a centre of excellence for the greatest designers and where she gets a job as a cleaner in the hope of getting an opportunity to climb the ladder into the world of high fashion. Enter stage centre the Baroness (Emma Thompson) arriving at the store looking like a demonic ally awful Audrey Hepburn with devilish dalmations. A fearsome, single minded and arrogant designer hijacking ideas from her team and passing them off as her own she sees in Stella the germ of genius and hires her.  But it’s when Stella finds her ideas being stolen and worse still a link between The Baroness and the demise of her own mother that Stella becomes Cruella. As the enemy within Cruella sets out to bring down The Baroness’ empire. 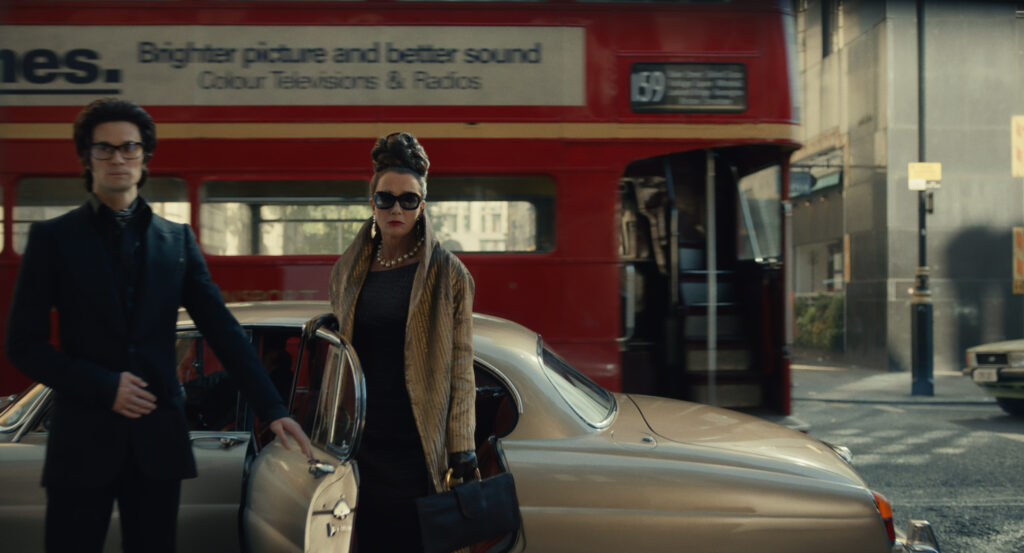 101 Dalmations was one of the first live action Disney films with Glen Close as Cruella back in the late 1990’s which spawned a sequel but here she produces. Close has handed the mantle over to Emma Stone and this is quite a departure from her normal roles with her more of an anti hero here with Emma Thompson (see her HERE at the ‘Dolittle’ premiere) as the real villain of the piece. Both are well matched within Thompson chewing the scenery in glorious fashion whilst Stone gives as good as she gets hiding her good girl / bad girl black & white hair under a red wig whilst working for The Baroness empire. It’s all unveiled in when Cruella becomes the centre of attention when she rocks up at any Baroness hosted event with the press present including an old school friend of Stella’s having recognised her and runs photos and gossip in TattleTown magazine. 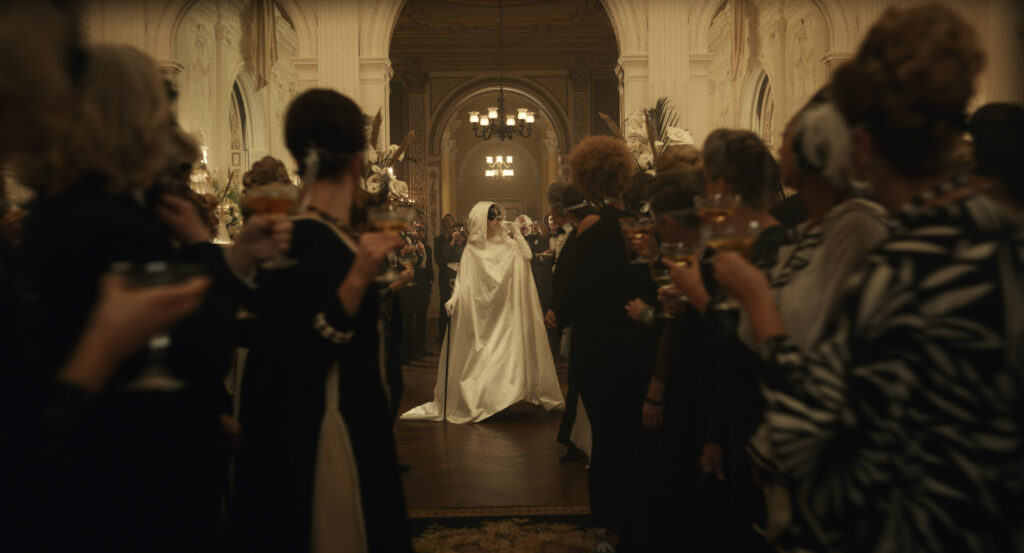 Though this is Disney it doesn’t always feel that way with some dark moments and a fantastic sound track that must have cost a fortune taking in as it does Blondie, the Clash, Bee Gees, Suzi Quatro, ELO and even the late Doris Day. And it’s used well with Rolling Stones ‘Sympathy for the Devil’ and Iggy Pop’s ‘I wanna be your dog’ used in some ironically appropriate scenes. But every department seems to have relished their input into the film with the costume department especially double Oscar winning Jenny Beaven embracing high fashion to the punk ethos of Vivian Westwood in some striking outfits. 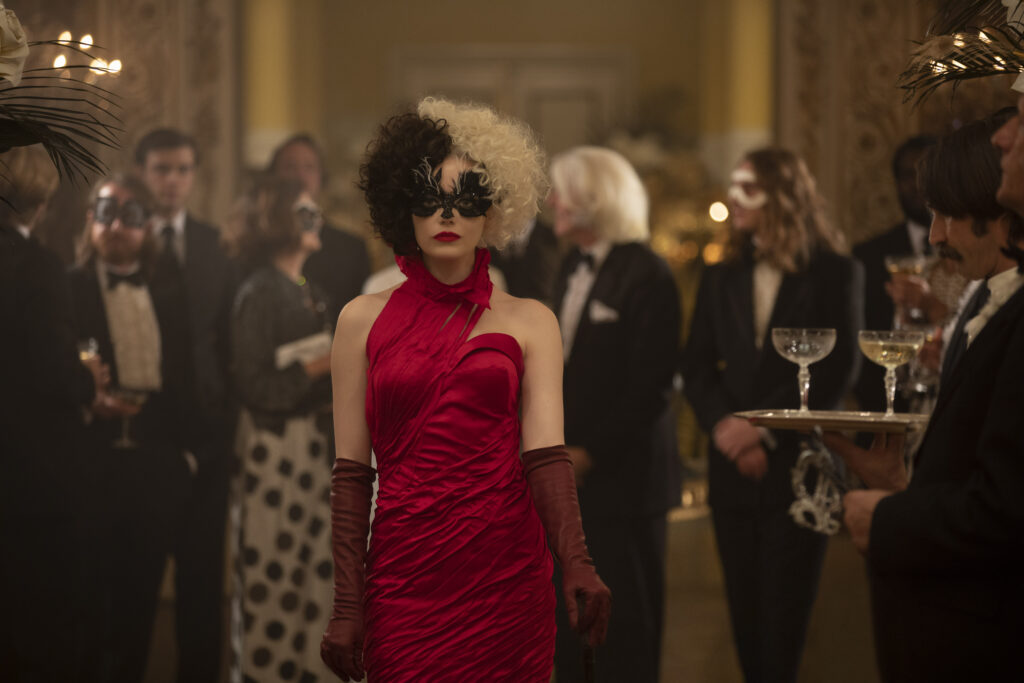 The banter between Thompson v Stone is great fun but it’s at the expense of the supporting cast. Mark Strong and Kayvan Novak as the Baroness’ Head of Security and lawyer respectively are largely wasted (but do wait for a final mid credits scene) as is John McCrea as a Bowie influenced shop owner. And like every Hollywood film set in London the geography of the city is all over the place but CGI is discretely used enhancing the scenes rather than drawing attention to itself.

Director Craig Gillespie whose previous films include ‘I, Tonya’ & the ‘Fright Night’ remake has some put some nice touches into the film with what looks like a homage to the Goodfellas ‘through-the-kitchen-and-into-the-night-club’ single shot and here he takes camera goes from the first floor of Liberty’s down into the basement to find Stella scrubbing toilets in one seemingly endless shot (although there are edit points that are easy to pick up). Equally when Cruella upstages The Baroness in front of the London press there’s some nice set pieces which every PR must be looking at for future film premiere ideas.  Though running at two and a quarter hours it is overlong but nonetheless Cruella is tremendous fun.