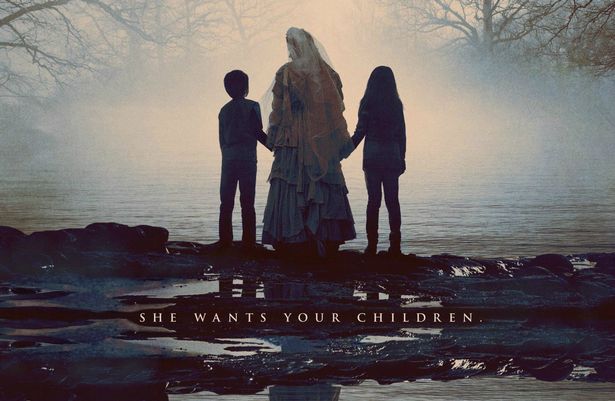 Our Editor has suffered the most terrible of all curses that of ‘hole-in-the-pockets’ syndrome which always occurs whenever it’s his turn to buy a round at The Nags Head (‘You’re fired!’ – Ed). The Curse of La Llorona is a little different starting way back in the 19th century with a Spanish mother drowning her own children in a country stream. Now we’d be the first to admit that your kids can drive you nuts and our Editor, who has two kids always says how he wanted three and now that he does he only wants one.

It’s that opening act of matricide that sees the film propelled forward to LA in 1973 where Anna (Linda Cardellini) is a widowed mother of two young children and works as a social worker and is  called to a case of child endangerment when a mother has locked two boys in a cupboard in a bid to protect them from some spirit out to get them. Mercifully the social worker doesn’t work for Haringey and the kids are whisked into child protection but all is not well as something supernatural really is after them.  What that is is a ghostly woman in white with murderous intent towards children and she turns her attention towards Anna and her young son & daughter.

Curse of La Llorona is directed by Michael Chaves whose debut this is under the auspice of horror maestro James Wan and Wan’s mark is all over the film, which is no bad thing, with some well constructed scares and creepy moments. Chaves builds a palpable sense of dread with the cast as afraid of  the woman in white cropping up unannounced like a restaurant manager at an all you can eat buffet when Gemma Collins squeezes through the door.

With the reason for the woman in white’s vengeful spree against kids made clear the film throws in everything in a hysteria riddled increasingly potty home invasion climax but up until then all works well enough. Wan has set the bar high with his scares but Chaves does a decent job here (in fact he’s landed The Conjuring 3 gig)  though he can’t quite resist the temptation of using the standard horror tropes of billowing curtains and things that go bump in the night and though it’s a bit daft there’s plenty here to make you jump and send a shiver up your back and makes an ideal first date movie.