Christmas for our Editor’s wife is one that finds her opening her presents and saying , ‘Oh how lovely……have you kept the receipt?’ because the following day sees her engaged in major take back to the shop operation. (‘You’re fired!’ – Ed). This is not a documentary about that day. Instead Take back is a actioner led by real life husband and wife team Michael Jai White and Gillian White nee Waters as on screen married couple Brian and Zara. Together they live a perfect small time life he as a teacher and she as a lawyer and for once it’s refreshing to see positive black role models rather than the ghetto criminals that seems to be the norm in the genre. 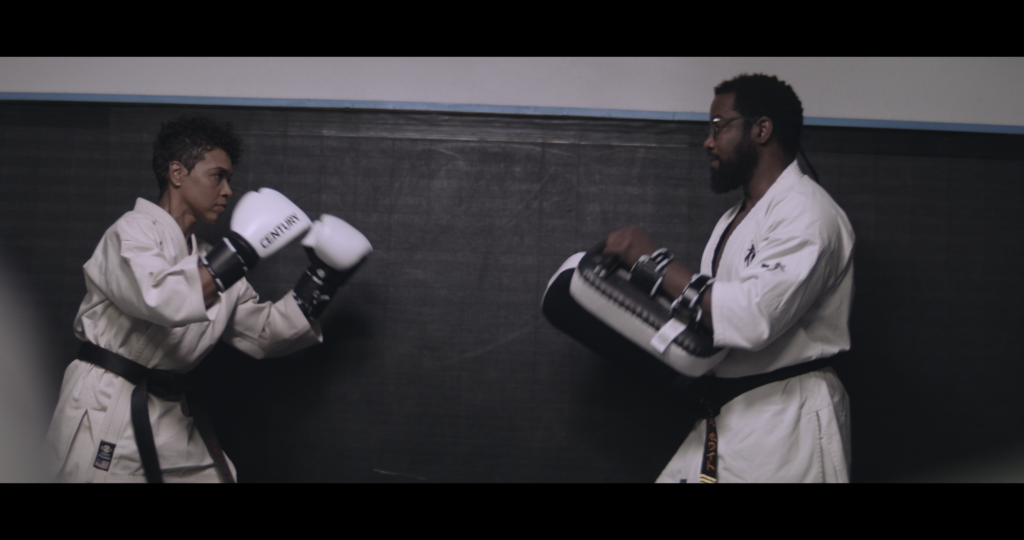 But Zara has a bit of a murky secret in her past which she is keen to keep that way having moved onwards and upwards in her life. We’re given an early glimpse of just what she’s capable of when she intervenes when things kick off in a coffee shop one morning and she takes down the female barista’s violent ex introducing him to the sole of her boot. But her good deed for the day sees her actions caught on CCTV, uploaded and gone viral much to her abhorrence as she’s keen to maintain a low profile. It’s only when her step daughter is kidnapped by a stranger from Zara’s past that forces her back into ass kicking action. 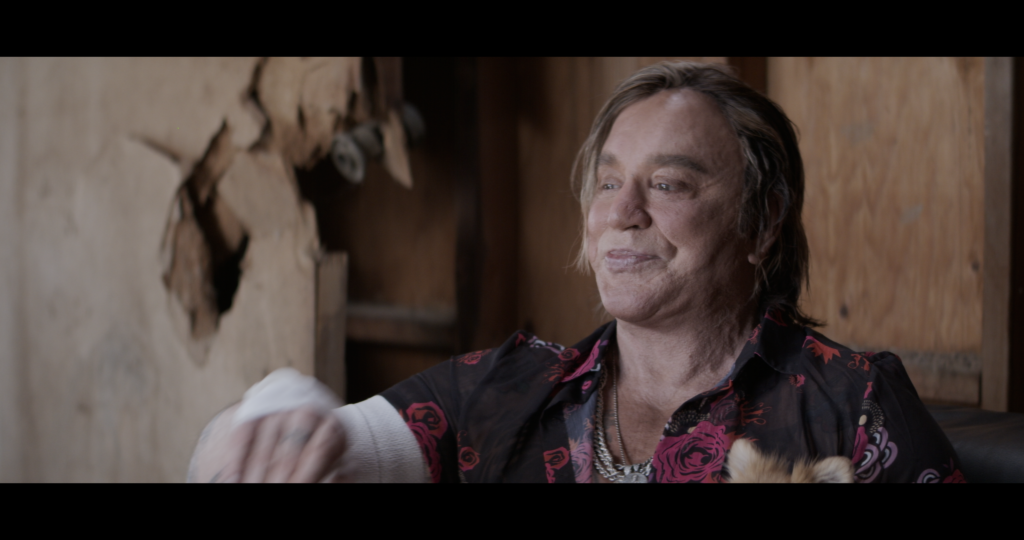 Behind all of this is the less than ominously named Patrick played by Mickey Rourke. We say Mickey Rourke as that’s what’s on the credits because when he does appear on screen  he now has the sort of face whose picture grandparents keep on the mantel piece to keep children away from the fireplace. Rourke’s career has been one of a series of peaks and ever deepening troughs and the fascination with him now is the amount of catastrophic surgery he appears to have had sporting a look that can best be described as ‘boy wanting to be a surgeon when he grew up and used a hot knife to practise on his sisters Barbie doll’. At his best Rourke has proved himself a very good actor but here he as a sex trafficker he spends much of the early part of the film silently looking into middle distance with a toothpick in his mouth and the final scene sees him repeatedly taking his sunglasses on and off presumably to aggravate the continuity assistant. Rourke, much like Bruce Willis, is now one of those big name stars that draws in an international audience for low budget films destined for DVD rather than theatrical release as is the case with Take Back. 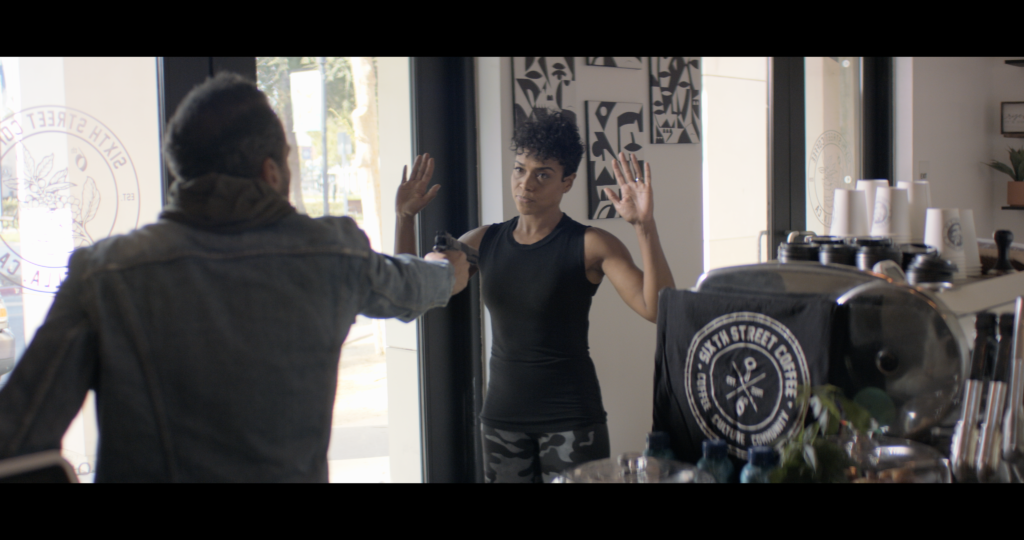 Michael Jai White takes a bit of a back seat with the fighting leaving it instead to the awesome hands of Gillian White who is great in the actions scenes and at 45 years of age performs some impressive moves  – one fight scene in a darkened room is great and there’s another with the inventive use of a pizza slicer! But directed by Christian Sesma (‘Paydirt’ – see our interview with Luke Goss HERE) these are cut too quickly and go in too close so that you can’t appreciate just how nimble she is. Whereas on other occasions there are gun fights which make it all too apparent what lousy shots the villains are akin to the sort of the 1970’s Bond baddies we used to see who couldn’t hit a cow’s arse with a banjo. 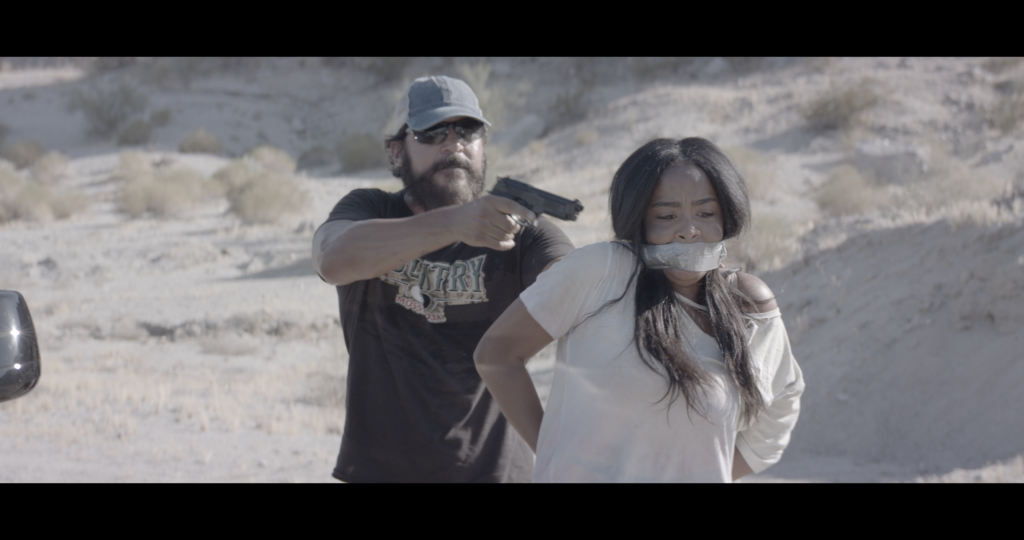 Take Back and its plot centres on sex trafficking in the mid-West and it’s a largely unknown truism which deserves a fuller exploration which is sidelined for the action set pieces. It does lose pace towards its third act but Mr and Mrs White are a great kick ass combo and we’d like to see more of them.

Here’s the Take Back trailer…..