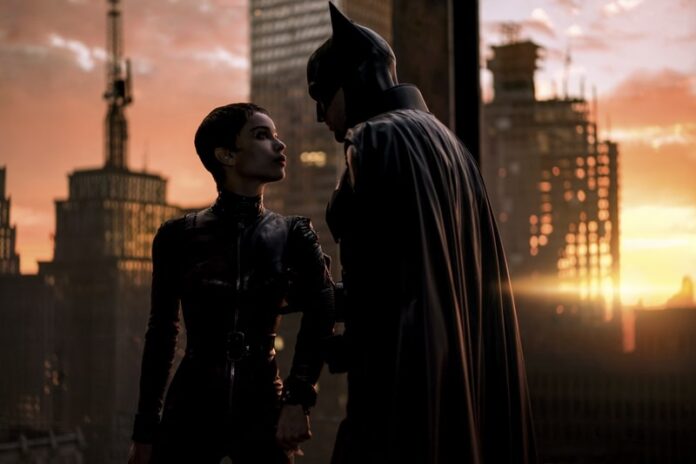 So we’ve had goth Batman (Keaton), kitsch Batman (Clooney)  gravel voiced Batman (Bale)  and moody Batman (Affleck) and now we have the leftfield casting of Robert Pattinson as The Batman in the latest version of the comic book fan favourite. Right from the start this is mean and moody stuff with our first glimpse of a rain drenched Dark Knight in a subway telling a black gang who have painted their faces white in what looks like some misconstrued BLM protest that, ‘I’m vengeance!’ before laying waste to them. Writer-director Matt Reeves version is no origin story. The Batman here is an established figure in Gotham City regarded by many as little more than a freakish masked vigilante although one who has the ear of Detective James Gordon (yet to be the Commissioner we know him as), and able to walk into crime scenes in full costume without being redirected to comic-con.

It’s a particularly brutal crime scene where the city’s mayor has been bludgeoned to death and his head covered in gaffer tape. It’s the work of The Riddler’s (Paul Dano) plan to uncover the hypocrisy and lies that have been covered up by the city’s hierarchy and he leaves riddles for Batman to unravel. This version of The Batman leans heavily on film noir so we have the voice over that book ends the film and a Gotham that is seen almost exclusively at night in torrential rain and a plot that returns the character to his original detective origins and a series of underworld hoodlums all involved in what the Riddler is determined to reveal. To that end we have Jon Turturro as a shady figure as well as a near unrecognisable Colin Farrell as Oswald Cobblepot aka The Penguin, a moniker which is never made clear as to why and we can only guess that possibly it’s a penchant for those chocolate covered biscuits (‘You’re an idiot!’ – Ed).  Farrell is very good if a little underused with his performance channelling a furious de Niro. Inhabiting the morally grey area is Zoe Kravitiz as a bisexual Selena Kyle aka Catwoman in a potty mouthed blasphemous characterization. The Bat and the Cat dynamic is played out here but much like Anne Hathaway’s version it pales in comparison with Michelle Pfeiffer’s iconic, definitive and nigh on impossible to top version of Catwoman.

Which brings us to the hero and villain of the piece. Paul Dano is as excellent as ever and his incarnation of Riddler is like nothing we’ve seen before and appears like the something creepily evil from a Thomas Harris novel and is the stuff of nightmares. Once stripped of a costume, the likes of which we’ve never seen before, he has a fantastic scene all whiny voiced as he makes his case for his actions and shows that he really is one of America’s greatest actors. But what of RPatz as The Batman? That we first see him as The Batman in full costume benefits his appearance as Bruce Wayne who has something of the emo about him – all lank haired, dark eyed and in one scene in a church so wan and pasty faced  as to make the location look haunted and is difficult to reconcile with his Batman alter ego  that frequently takes gun shots at point blank range that it’s a surprise he’s not peppered with more holes than Prince Andrew’s alibi.

At just under three hours The Batman has taken this the story to epic length exceeding even Christopher Nolan’s films. Matt Reeves film has toned down the spectacle that the previous Batman films have had but an explosive car chase is impressive and smaller scale visual flourishes that include The Riddler’s appearance to a gunfight in a blacked out corridor all add to the distinctive look of the film. Like Joker, Paul Dano’s Riddler has a nihilism with his rants and actions likely to appeal to Incels and conspiracy theorists for those disillusioned with politics so rife in the UK especially and in many respects this is a Batman is for a modern day.