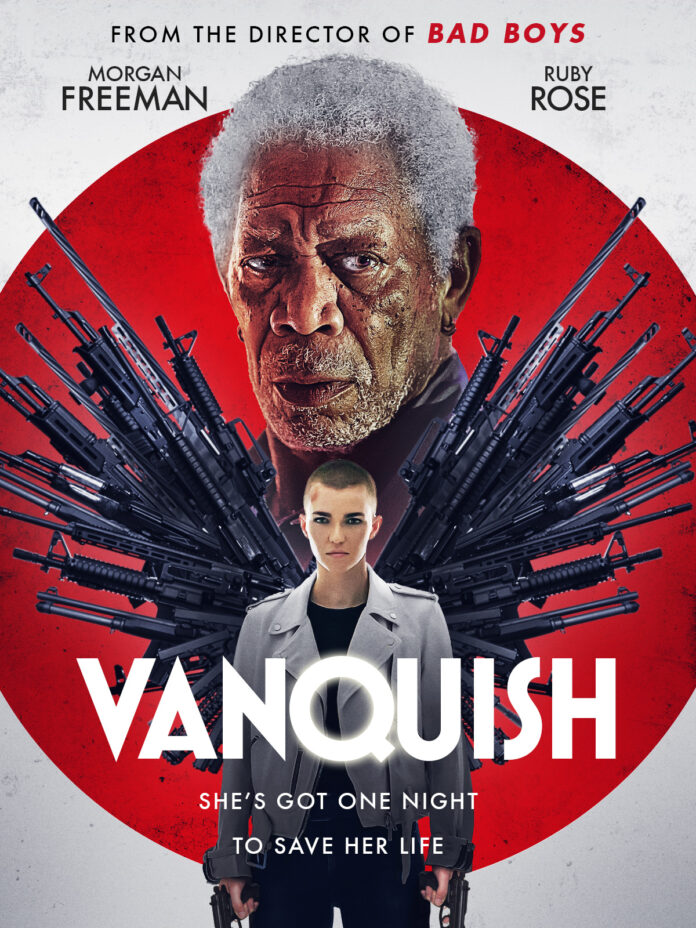 Vanquish is one of those films not helped by the pandemic closing cinemas and finding itself vanquished (see what we did there?) to digital download. The plot centres on Victoria (Ruby Rose), mother to daughter with a condition that needs expensive medical treatment but its not only her daughter who she provides care for but a retired police commissioner Damon (Morgan Freeman) paralyzed and wheelchair bound. He lives in the most extraordinary designer house bought with either an outrageously good police pension or he’s been on the take for years. It’s the latter obviously and when he is double crossed he decides to collect what he is owed from five crooked associates around town. With little chance of trundling around the city and getting what he is owed, it’s Victoria he enlists to carry out the job on his behalf. 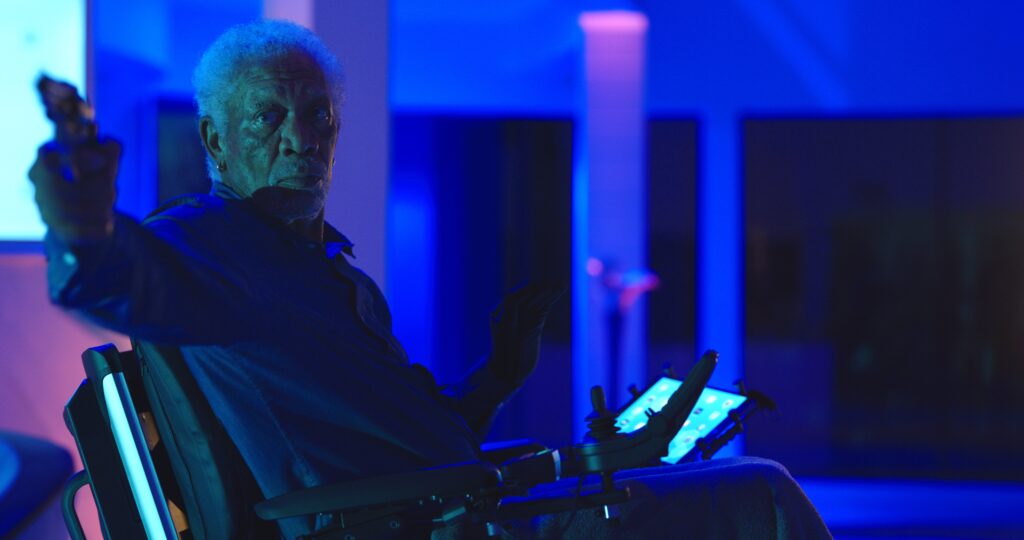 Now we may be wrong on this but we’re not aware of any carer who acquired a skill set that includes the emptying of bedpans and giving bed baths having previously been a drug courier for the Russian mafia but that’s exactly what Victoria is. As an enticement Damon offers to pay for her daughter’s treatment if Victoria carries out the jobs but after she refuses Damon gets his way by holding her daughter to ransom.  So off goes Victoria wearing body worn camera and two handguns strapped to her back as she rides her motorbike from job to job like the most ruthless UberEats driver. 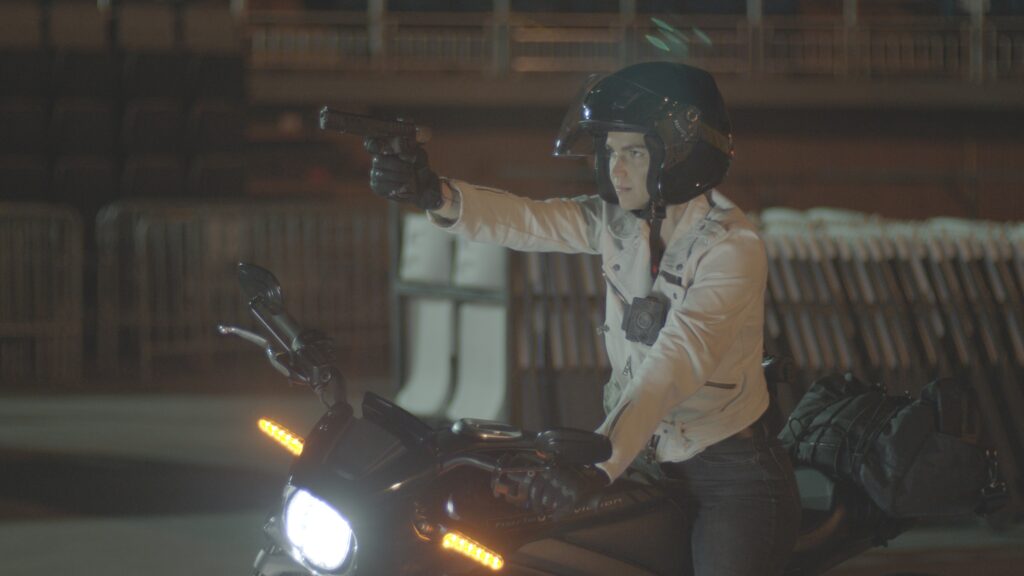 What follows is a series of exciting and brutal action set pieces…..at least that’s what should happen. Instead we get a series of lacklustre lazy arse sequences all watched over by Morgan freeman with the sort of look on his face that suggests he can’t quite believe he agreed to be in the film. Freeman is not without his own back catalogue of movies that benefit from his presence rather than him benefiting from being in the movie and Vanquish certainly falls into that latter category. The appeal of the role could only be that he is able to sit down in a single location and that he presumably got paid. Here he just watches a screen uttering such Shakespearean prose as, ‘Get out of there’ or, ‘It’s a trap!’ yet at no point does he say, ‘Get me my agent on the phone right now!’ 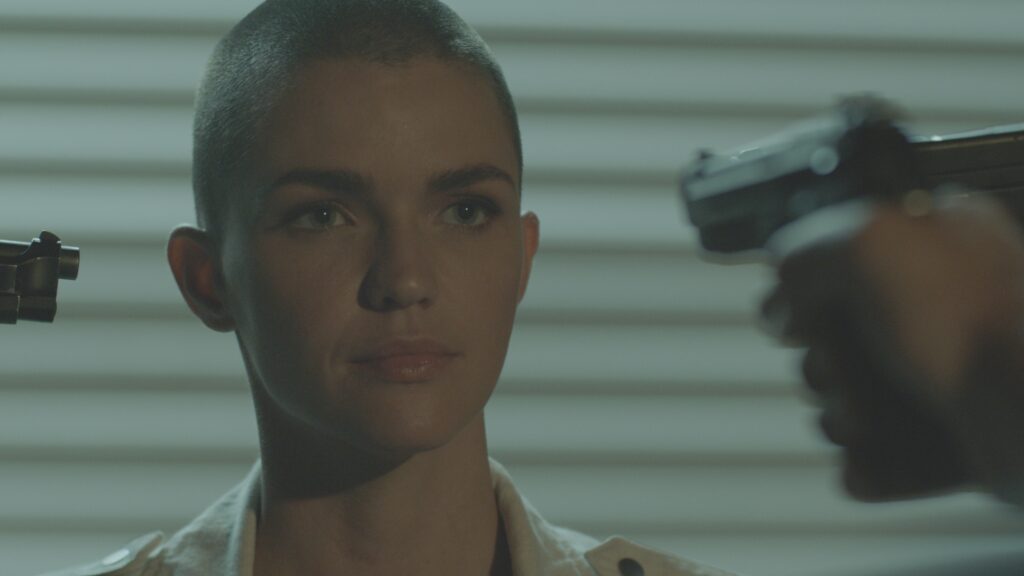 The premise of Vanquish is not dissimilar to the Tom Cruise starrer ‘Collateral’ with his ‘five missions in one night’ plot and this angles for the same icy cool neon noir of that film but with a rambling irritating electronic synth score.  After films such as ‘The Doorman’ and ‘SAS Red Notice’ Ruby Rose is becoming the go-to-girl for action films these days. Looking like the tattooed twin brother of Nicholas Hoult her sylph like build doesn’t convince as trained killer able to take out a multitude of brawny men and was part of the problem with her casting in John Wick 2 in the final smackdown with the eponymous hitman and was about as threatening a presence as a WWF final with Stephen Hawking.  But Vanquish lacks even the novelty of that with next to no thrills and playing like a poor man’s version of Collateral.