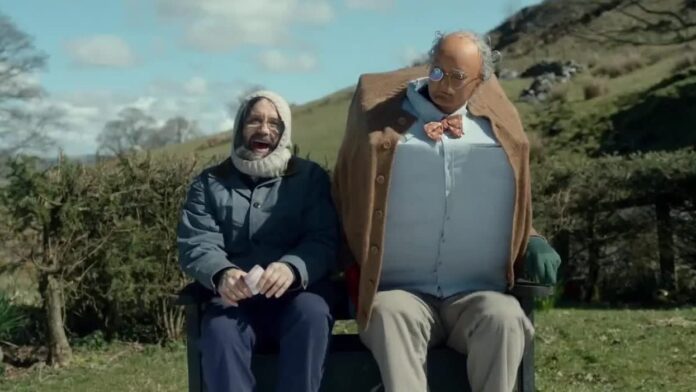 Everyone remembers that odd kid they were in school with who did daft things like swapping his Xbox for a Kit Kat or collecting naval fluff or cataloguing how often they go to the toilet and eventually they grow up and go on to become editor of AnyGoodFilms (‘You’re fired!’– Ed) Brian of new film ‘Brian and Charles’ is likely to have been one such kid. Brian (David Earl) lives on his own in rural Wales and we first see him sat in his workshop shed alone telling us about his inventions – a belt pouch for eggs, a pine cone bag and all manner of other Heath Robinson style inventions that single him out for sectioning rather than patenting. Lonely and alone he builds himself a robot from a washing machine and a mannequin head. Again the sort of thing that those strange kids in school thought they could do using a broken calculator and a shoe box and, to no one’s surprise, never worked except guaranteeing them a good shoeing after school. It’s the same for Brian when he switches on his robot to no avail until it mysteriously comes alive during a lightning storm in clear parallel to the classic Frankenstein’s monster.

Now having come to life clanking around like the embarrassing robot fancy dress outfit your Dad has made you for a party (here the robot is played by cowriter Chris Hayward wearing a washing machine), he educates himself by reading a dictionary overnight, develops a taste for cabbages and takes the name Charles. And so begins their friendship with Charles being child-like and eventually seguing into something of a petulant teenager retiring to his bedroom to play loud music before he is kidnapped by the donkey jacketed village bully boy Eddie (Jamie Michie) and his appalling feral twin teenage girls who quickly grow bored of their new toy and want to put him on their Dad’s annual giant bonfire.

Developed from a short film this expands the idea to a 90 minute film written again by David Earl and Chris Hayward and the film starts off as a documentary with Brian speaking to camera but soon abandons this for a normal drama. Earl may not be a household name but is best known for his roles in Ricky Gervais TV projects having had a minor role in Extras before coming to the fore with major supporting characters in ‘Derek’ and most recently all three series of ‘After Life’. Brian and Charles strives for those moments of tear jerking pathos that Gervais is often so successful at depicting but just don’t work here. Earl is an excellent performer but Brian comes across like a distant relation to the characters that Earl has played in Derek and After Life but without the laugh out loud moments. Brian and Charles plays out a little like a Roald Dahl type story and is more mildly amusing than laugh out loud funny in what is essentially a whimsical tale or bromance.