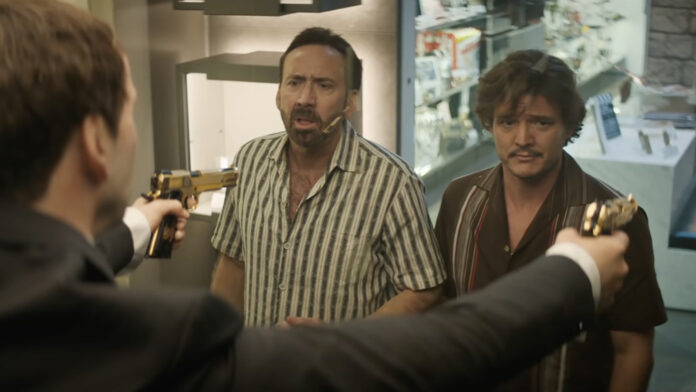 We’ve sat through some dreck in our time. Pallid sequels, dreadful star vehicles and let’s not forget the sheer unfettered hell of any invite we get that starts with ‘Starring Pauly Shore…..’ . few A-listers have a blemish free filmography but its probably Nicolas Cage whose back catalogue has a longer stretch of vacuous inanity than a conversation with Brooklyn Beckham. And Cage himself would be the first to admit that many of his films were there to service tax bills and paying off ex-wives with his frustration bearing fruit in many of his on screen performances that are borderline certifiable. The Unbearable Weight of Massive Talent capitalizes on this. Quite what Cage must have made of this script when it landed on his lap is anyone’s guess but here he effectively plays a heightened version of himself, a sort of slightly washed up and divorced star needing a good role to restore his status and his first scene sees him pitching for what he sees as the ‘role of a lifetime’ as he meets at the Chateau Marmont renowned venue for Hollywood power meetings where directors pitch projects to stars and stars vie for possible award winning roles. Here Cage pitches his desire for the role to real life director David Gordon Green  (who directed one of Cage’s better films ‘Joe’)  which ends with an hilarious unprompted audition in the car park with Cage sending himself up. And that’s part of the joy of the film as Cage is only too aware of his own onscreen persona and relishes the chance to send it all up notably when he reprises his role as Sailor Ripley from Wild at Heart as a sort of alter ego in truly bonkers mad OTT fashion.

With the eye rolls of his ex wife Olivia (the always great Sharon Horgan), the emotional disconnect from his teenage daughter and a huge hotel bill owed to the manager of where he’s been staying for over a year he not only needs a star affirming role he also needs a lot of money too so when his agent Fink (Neil Patrick Harris) lands him a deal to appear at a megarich superfans birthday for a quick $1million it’s an easy win for him. What they are both unaware of is that the superfan Javi Gutierrez (Pedro Pascal)  is actually an international gun runner and that Cage is appropriated by a pair of covert CIA operatives to kill him. But it all starts to go awry when Javi and Nick start to develop a bit of a bromance and start work on writing a script together whilst the CIA grow ever more frustrated at the actors antics preventing  them from taking down the gunrunners empire.

There’s an immense amount going on here at different levels and director & co-writer Tom Gormican clearly has a lot of affection for the actor and in return Cage is delightfully self-deprecating in the role of Nick Cage. There’s as much here for non-fans as there certainly is for his legion of fans and looking back at his 40 years in Hollywood and there’s a load of films that are beloved. It’s encapsulated in one scene where Javi recounts how he bonded with his father over 1994’s Guarding Tess.  Regardless of his extremely varied back catalogue there’s a load of films that are favourites taking in just about every genre. So whilst films like 2020’s ‘Jiu Jitsu’ are instantly forgettable, someone will love it. Let’s forget that Cage’s films include Raising Arizona, The Rock. Con Air, Face Off, Captain Correlli’s Mandolin, Adaptation, Kick Ass, Mandy and Pig and added to that is his Oscar winning performance in Leaving Las Vegas.  The Unbearable Weight of Massive Talent is gloriously good fun and is eminently re-watchable if only to pick up the huge array of Easter Eggs that festoon the film.